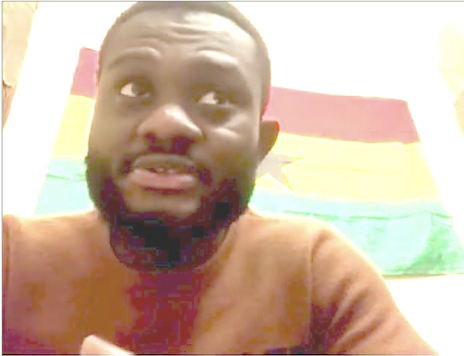 Nana Arthur Hochman, a Nigerian medical student in the Ukraine.

(TriceEdneyWire.com/Global Information Network)
Thousands of African students are among the tens of thousands of Ukrainians seeking shelter from a barrage of Russian airstrikes against its southern neighbor in what has been called an unprovoked and unjustified effort to remove and replace the Ukrainian government by the President of Russia.

The students, using Twitter and other social media platforms, have been pleading with their governments for help to escape the war-hit nation. The students say they have been prevented from crossing to Poland due to a ‘Ukrainians’ first’ policy.

While the Africans are feeling the Russian boot against its southern neighbor, President Vladimir Putin’s invasion has so far been met with diplomatic silence on the continent except for an acid-tipped comment from Kenya’s ambassador at the UN earlier this week. While rebuking Russia’s move into eastern Ukraine, he compared the experience of African nation-states and their colonial borders with the crisis in Eastern Europe, calling the current conflict ”just one more symptom of a pathology spawned by the Western colonial tradition.”

Ambassador Martin Kimani faulted a “pathological nostalgia for the enforced order of the old Soviet Union,” adding that Kenya “strongly condemn[s] the trend in the last decades of powerful states.”

“Multilateralism lies on its deathbed tonight,” Kimani declared. “It has been assaulted today as it has been by other powerful states in the recent past.”

Dr. Araba Maame Arkoah of Ghana, a medical doctor speaking with the Accra-based Starr FM, said Ghanaians living or studying in the Ukraine were waiting for a rescue plan from the Ghanaian government following the surprise attack launched by the Russians.

“We are asking ourselves, has the government of Ghana heard what is happening here? We really need the help of the government. As it stands now, we need to come home. I’m scared, very scared, everybody around me is scared,” Dr. Arkoah said.

On Thursday, Feb. 24, a train carrying Ghanaian students was reportedly attacked by Russians, according to Member of Parliament for North Tongu constituency, Samuel Okudzeto Ablakwa, speaking in a TV interview.

According to the ministry, over a thousand Ghanaian nationals are currently studying or working in Ukraine, adding that the ministry is “gravely concerned” for their safety.

“There are about 900 students and in total, we have about 1,500 Ghanaians in Ukraine,” said Kwasi Mintah who was home when he heard a number of explosions. “The Ghanaians here are panicking, they are afraid”.

Similarly, some 4,000 Nigerians studying in tertiary institutions have been sending distress calls for their evacuation from the theatre of war. A special flight operation was announced by Nigeria’s foreign affairs minister Geoffrey Onyeama.

Some 200 Zambians are studying in Ukraine and have reportedly been told to move towards Poland and find a plane stationed in Warsaw waiting to take them home.

Over the last two decades, Ukraine has emerged as a choice destination for African students from Ghana, Nigeria, Zambia, and South Africa, especially in the fields of medicine and engineering. According to Ukraine’s Ministry of Education and Science, some 80,000 international students study in Ukraine with the largest number from India, followed by Morocco, Azerbaijan, Turkmenistan and Nigeria.

Abuja resident Paul Enyim fears the consequences will be felt well beyond Ukraine.