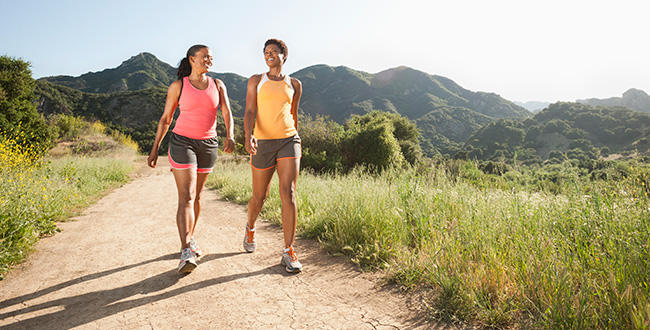 Sharon Jennings had no idea she would shed about 90 pounds, brighten her outlook, and ratchet up her self-confidence, when she launched a walking group with five women in Richmond about two years ago. Now about two dozen women of color belong to Girl Trek, a national walking group that is part of First Lady Michelle Obama’s Let’s Move project. As these women in Richmond hit neighborhood sidewalks or stride through a local park during National Minority Health Month, (which is celebrated in April), they are helping to cure what ails many people of color: depression and anxiety.

“You cannot believe how much better I feel compared to two or three years ago,” said Jennings, who launched a Girl Trek group in Richmond after she and her daughter participated in one in Washington, D.C. several years ago. “When you walk you would be amazed at how many more will join you,” Jennings said. “My beautician joined me. When I started this group in Richmond about two years ago, about five neighbors walked with me. Now about 25 women walk with me. We walk at least four days a week, at least six miles a day.”

“Two years ago, I got on my scales and did not like what I saw,” Jennings said. “So I decided to join a gym. And I started walking each day. It has improved me because I have gained major self-confidence. I have also lost from 88 to 92 pounds in two years.” The impact that walking has on depression and stress surfaces in several reports, including a 2009 study by Harvard University. “Exercise might be an acceptable substitute for antidepressants,” the report noted. “Besides lifting your mood, regular exercise offers other health benefits, such as lowering blood pressure, protecting against heart disease and cancer, and boosting self-esteem.”

This means depression may affect nearly 19 million adults each year. It can’t simply be willed away by shaking off the blues. But experts say depression will lift if you exercise each day for half an hour to an hour. According to the Harvard study, mental health treatment combined with daily moderate exercise such as brisk walking caused depression to lift completely in seven out of 10 people. So overall good health was one of several goals that Morgan Dixon had in mind when she launched Girl Trek three years ago with Vanessa Garrison. The non-profit is headquartered in Washington, D.C. and currently has 35,000 members in 400 neighborhoods.

“Black women hit the streets every day,” Dixon, the founder, explained in a Jan. 31, 2014 Let’s Move Blog. “Right now, thousands of African-American women and girls across the country are forming walking teams, lacing up their sneakers and gearing up for a series of heart pumping treks through their neighborhoods.” A type of cure-all that dates back to legendary women of color such as Harriet Tubman who manned the Underground Railroad during slavery, and women who walked several miles to get to work during the Montgomery bus boycott, walking improves overall well-being. Dixon said, “When women walk, things change … We walk for healing.”

And this is how you can increase your own sense of well-being during National Minority Mental Health Month. Consider the facts but dismiss them. Black women, for example, suffer disproportionately from major depressive disorder (MDD), according to a 2012 University of Wisconsin report. Black women (43 percent) use denial or religion to cope with serious emotional and physical problems including MDD, cancer, and heart disease. Black women rarely seek medication or counseling for major depression. Its symptoms include feelings of sadness; hopelessness; worthlessness; helplessness; changes in sleep habits and fluctuating energy and concentration levels.

This is the point. Black women already know many of the facts. So dismiss them, especially the ancient superwoman myth. You know the myth that says you must manage psychological stress with a stiff upper lip, bare knuckles, and characterize its symptoms (depression and anxiety) as ‘evil’ or acting out, which some women actually did in research from the National Alliance for Mental Illness. This means the facts show serious psychological distress is a fact of life for many women of color. But dismiss the facts by analyzing the tiny, teensy microscopic emotions that launch serious psychological distress. The Office of Minority Health pinpointed and analyzed the teensy, tiny emotions that launch psychological stress. The list includes sadness, hopelessness and feelings of worthlessness.

Blacks, in other words, were 20 percent more likely than whites to report feeling serious psychological distress. And this is why you should dismiss the facts and turn your attention to results-getting strategies. While studies show moderate exercise helps. Experts offer other strategies including positive self-talk. Learn how to self soothe, in other words. Specifically, say this to calm your racing pulse and runaway heart: ‘This feeling will pass; I will get through this; I am safe now.’

Distraction is another powerful strategy. Think of something other than the anxiety symptoms you are experiencing. The point is there are three ways you can manage runaway psychological distress. In plain terms, you can manage those tiny, teensy feelings that produce depression by first, improving your diet. Second, get moving – Exercise. Third, get more sleep. Jennings said hitting the sidewalks and talking to other women has improved her mind, body, and soul. “You cannot believe how much better I feel compared to two or three years ago,” Jennings said.

“Walking stops me from staying inside and being depressed,” she added. “Now I want to be in everything.” For example, she participated in The Last Great Chocolate Race, a walk-run, 10-mile event that was held on April 9, In Hampton, at 600 Settler’s Landing Rd. “I will not stay in the house,” Jennings said. “I feel wonderful. I no longer have high blood pressure or arthritis. In Girl Trek you commit to walking. Plus, the fellowship helps. If you are walking alone, for example, you may not push yourself as hard. But if you are walking and exercising with others you walk without realizing how far you’ve walked.” Hampton Roads does not have a Girl Trek walking group. To launch a Girl Trek walking group in Hampton Roads, you will need at least 10 people (including yourself). To learn more, please go to www.girltrek.org, or phone (202) 808-8419.