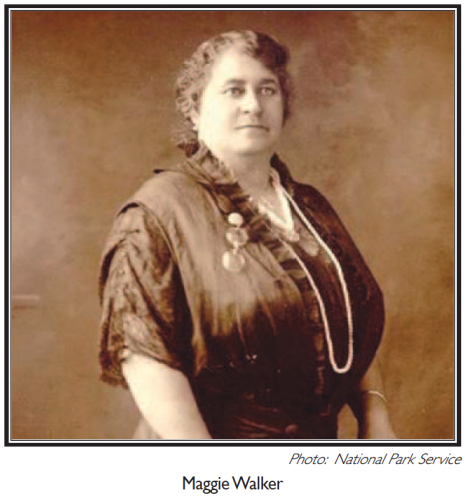 Maggie L. Walker probably would not have become the first female bank president if she had not become a young bride and been forced to resign from her teaching job in Richmond.

As the nation observes the 2019 Women’s History Month theme, “Visionary Women: Champions of Peace and Nonviolence,” zero in on what Walker did at this seeming dead end. There may have been laws that stopped married women from teaching school; but no law said she could not shift gears after she married in 1886, lost her teaching job, and blazed a new path through the post-Civil War era that offered African-Americans limited opportunities.

Or this is what Ralph Waldo Emerson said about trailblazers, “Do not go where the path may lead, go instead where there is no path, and leave a trail.”

Walk through downtown Richmond and stroll past the towering statue of her as she lived – her glasses pinned to her lapel, a checkbook in hand. The statue was designed by Toby Mendez and unveiled on Broad Street in Richmond in 2017.

Walker’s trailblazing legacy began in steps and stages. She began working as a volunteer with the Independent Order of St. Luke, an African-American burial society that served as a fraternal order and life insurance company. Aiming to enroll 10,000 new members in her new commission-salary job, Walker traveled the East Coast, the South, and Midwest, enrolling clients who could not buy disability and life insurance from white firms during the Jim Crow era.

In 1899, Walker was elected secretary of the fraternal and life insurance company. It was on the verge of bankruptcy. However, she envisioned launching a company that would not only provide insurance but also provide an array of services including real estate, financial services, education, food, and clothing.

The next year, in 1904, she bought a house in the heart of Jackson Ward and added central heating, electricity, several bedrooms and enclosed porches. The number of rooms increased from nine to 28 rooms. In 1928, an elevator was added in the rear of the house that was purchased by the National Park Service in 1979.

Envisioning even more possibilities, Walker in 1905 launched the St. Luke Emporium, a department store that provided jobs and affordable clothing to African-Americans.

“I was not born with a silver spoon in my mouth, but a laundry basket practically on my head,” Walker once said.

On the heels of breathing fresh life into a dying organization and launching several new businesses, Walker encountered the Great Depression in 1930. She merged the small bank that she founded in Richmond’s Jackson Ward with two other African-American owned Richmond banks around 1931 to form Consolidated Bank and Trading Company of Richmond, which at one point had $111 million in assets and seven branches. She remained president until 1929. Four years into the Great Depression Walker, who had suffered for many years from diabetes and was confined to a wheelchair, died at age 70 on Dec. 15, 1934.

By the end of the 20th century, Walker probably would not recognize her small community bank. Consolidated became the last African-American-owned bank in Richmond and struggled to compete with much larger banks downtown. It had several troubled loans on its books and could not raise enough capital to stay afloat.

For three decades, from 1971-2001, Vernard William Henley took the helm. The bank’s deposits increased from $4 million to $115 million, according to The Richmond Free Press. “But in (Henley’s) final year when he also was chairman and chief executive officer of Consolidated, he approved high-risk loans that resulted in damaging loans. Those losses ultimately forced the sale of the bank four years later and brought its end as an independent operation.”

Henley, who died at age 85 in 2014, made loans to predominantly African-American churches and small businesses. “He opened new branches on the South Side, the East End, and North Side in addition to the Jackson Ward headquarters,” according to The Richmond Free Press. “He later added three branches in Newport News and Hampton. In the early 1990s, he overcame a $1 million loss when a scam artist ripped off Consolidated and several bigger banks in the city.”

In 2009, Premier Financial Bankcorp announced plans to buy the local bank. In April 2011, Consolidated became inactive. A series of mergers and acquisitions followed including an acquisition in 2018 to Acquired First Bank of Charleston, located in Charleston, W. Va., according to USBankLocations.com.

“That was the toxic side of integration,” said Michael Grant, who heads the National Bankers Association, a trade group representing nearly 200 minority and women-owned banks across the United States.

“We started to lose a lot of our businesses and support for our businesses,” Grant added, in a 2016 story in The Atlantic titled, “The Rise, and Fall of Black Wall Street.”

One example is Tri-State Bank in Memphis, which was founded in 1946 by the late Dr. J. E. Walker, and his son, the late A. Maceo Walker. It is one of the few banks that survived. According to its website, Tri-State Bank kept its focus on the community it served.

For example, during the civil rights struggles of the 1950s and 1960s, “local sit-ins were planned in the bank’s boardroom, and bank officials kept the vault open one night to provide bail money for protesters. Also, when the Lorraine Motel, site of the assassination of Dr. Martin Luther King, was faced with foreclosure in 1982, Tri-State Bank provided $60,000 in loans to help save the facility. The motel became the National Civil Rights Museum. The Bank has provided loans to other community organizations and historically Black colleges from Tennessee to Texas.”

While only 25 African-American-owned banks remain in the United States, according to the latest data from the FDIC, compared to 45 a decade ago, Walker’s small bank blazed a trail through the bleak economic landscape for several decades because white-owned banks would not lend to African-Americans. At its height, there were more than 100 African-American owned banks.

Still, history has not forgotten Walker, the daughter of a slave. She came to a dead end, carved out a new path. Her name graces a high school in Richmond, The Maggie L. Walker Governor’s School for Government and International Studies, which Newsweek has recognized every year since 2006 as one of the 21 most elite public schools in America. In 2013, Maggie Walker was ranked 14th in Newsweek’s “Best Public High Schools.” Walker was honored as one of the first group of Virginia Women in History.

Follow us
In this article:Maggie Walker, Women History Month

By Leonard E. Colvin Chief Reporter New Journal and Guide The 2019 theme of Women’s History Month is “Visionary Women: Champions of Peace and...