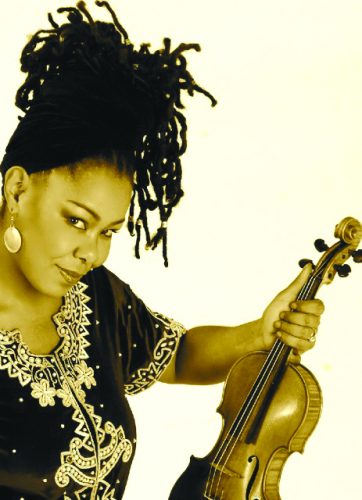 Are you ready for a “Soulchestral Groove”?

One is coming to the Attucks Theatre during the Church Street Jazz concert series, and a homecoming for internationally acclaimed violinist Karen Briggs.

Karen masterfully plays every genre of music so let’s not limit her to just being a jazz performer. If Coastal Virginia had such an honor, Briggs would definitely fall under the category of a national culture treasure.

No one plays violin like Karen Briggs. To her, music is intuitive. Playing the violin is her instrument of choice for tactile expression.

A marquee jazz performer, as well as a sessions collaborator, she is currently touring with renown keyboardist Lao Tizer, jazz guitarist Chieli Minucci. And, on occasion, the ladies of Jazz in Pink. Karen emerges herself into the music during the aggregation’s rendition of “16th Heaven” from their recently released CD/DVD combo-pack “Songs From The Swinghouse.” If it is on Saturday’s set sheet, jazz fans will be sure to marvel at her musical prowess.

“Lao and I met years ago, probably at the height of my career when I was performing with Yanni,” said Briggs. “I had a good chemistry with his music, and he has written to my sound and violin. We did a lot of new compositions with this CD/DVD project. Lao Tizers is always writing. And Chieli, well the three of us can go into a zone where our music converges in the right space.”

The band has been touring in various configurations for the last two or three years.

As violinists go, Karen is comfortable when her name is mentioned along such jazz violin performers as Jon Luc Pointe and Noel Pointer. Briggs has taken playing the jazz violin to a whole new level, and her playing has inspired a whole new generation of musicians and jazz violinist.

Briggs, who developed her musical artistically during her formative years in Portsmouth, now resides in Los Angeles. When she likes a little taste of home when she is on the west coast, one of her plans when she performs at the Historic Attucks Theatre here is to make sure she gets her serving of “Yock.”

“I like the thin Yock. Cook it in the broth of chicken wings and give me my catsup, soy sauce, hot sauce, boiled egg and chopped onion,” she said with a chortle. “I tried to explain it to some chefs in China, so it’s a meal that definitely originated from (coastal) Virginia.”

Visualize an Avante Garde film. If you’ve never seen Yock noodles being made by the right chef, visualize a beautifully edited segue from a masterful artistic Tai Chi exercise. The making of the flat noodles is rhythmic, like the choreographic and masterful images of Karen performing her virtuoso artistry on the strings of her violin.

When she began her due diligence in learning music, Briggs says she found the limits of classical music binding and even restrictive to the instrument’s real potential in her musical world view.

Karen started experimenting, and would eventually find her groove with the improvisation of jazz music. Briggs’s musical evolution was inevitable.

She hails from a family of musicians.

Her dad, the late Frank Briggs who lived in Portsmouth, sang in a quintet and played saxophone. Her grandfather played trumpet and piano.

One would call her a savant, as a pre-teen entering her halcyon days. Around the age of 12, those close to her marveled at her ability to play violin concertos by ear. Her violin chair led the class orchestras at Woodrow Wilson High School under the tutelage of the late Jerlyne Harding.

It was about that time that Briggs said she had to learn how to develop her own style to play music by making the instruments available to her sound that way. She theorized, “it was supposed to sound as if it was a more expensive violin.”

The discipline it took Briggs to find that sound helped her to refine her technique.

“We had some exposure to classical music and everything, but Mrs. Harding exposed us to (Duke) Ellington, Count Basie and Barry White and the Love Unlimited Orchestra, Earth Wind and Fire, and the Spinners. That was the hip-hop of my time; and Aretha Franklin and Mahalia Jackson and all the gospel. That’s what kept us interested in playing. What else was I going to play?” said Briggs, rhetorically, regarding her own incomparable style.

While at NSU, she took a leap of faith playing with the Virginia Symphony Orchestra after playing with that premiere organization and headed to Los Angeles. Karen spent weekends perfecting her craft jamming with her father, his bands and friends on weekends. After high school, she enrolled at Norfolk State University concentrating in music and mass communications.

“One of my major influences at Norfolk State was Dr. James Reeves,” said Briggs. “I’m not sure he realized my approach to the violin early on. He was kind of disappointed when I left the Virginia Symphony where he played with me and got me to play there but he, at the same time, understood my creative growth.”

The rest is local music legend.

In 1991 Briggs auditioned with contemporary instrumental musician Yanni. She secured a role in his upcoming tour after playing over a performance of his Within Attraction. Actress Linda Evans, a mutual friend, pushed for Briggs to be a featured soloist in Yanni’s Live at the Acropolis tour.

She brought the house down.

Briggs’ performances during the tour gained her broad recognition and the moniker “Lady in Red.” Briggs toured with Yanni for thirteen years, including the Live at the Acropolis, Tribute, and Ethnicity tours. Karen’s over four-decade span through various music genres includes an eclectic amalgamation of her creativity and range fused with multi-cultural musical style. Her sublime showmanship and jazz fusion of the world saturated with improvisation and embellished with her virtuosity.

“It dawned on me a long time ago that the violin is the perfect instrument for me,” said Karen, interviewed as she was making last minute travel arrangements.

It is always a “Soulchestral Groove” when she plays in the Seven Cities. 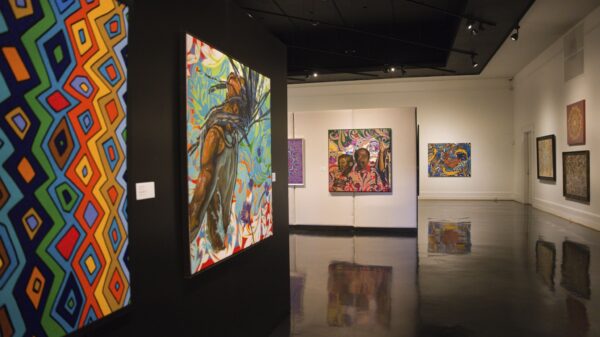 (Portsmouth) The Soul Finger Project exhibit is currently on view through June 12th at the Portsmouth Art & Cultural Center located at 400 High...