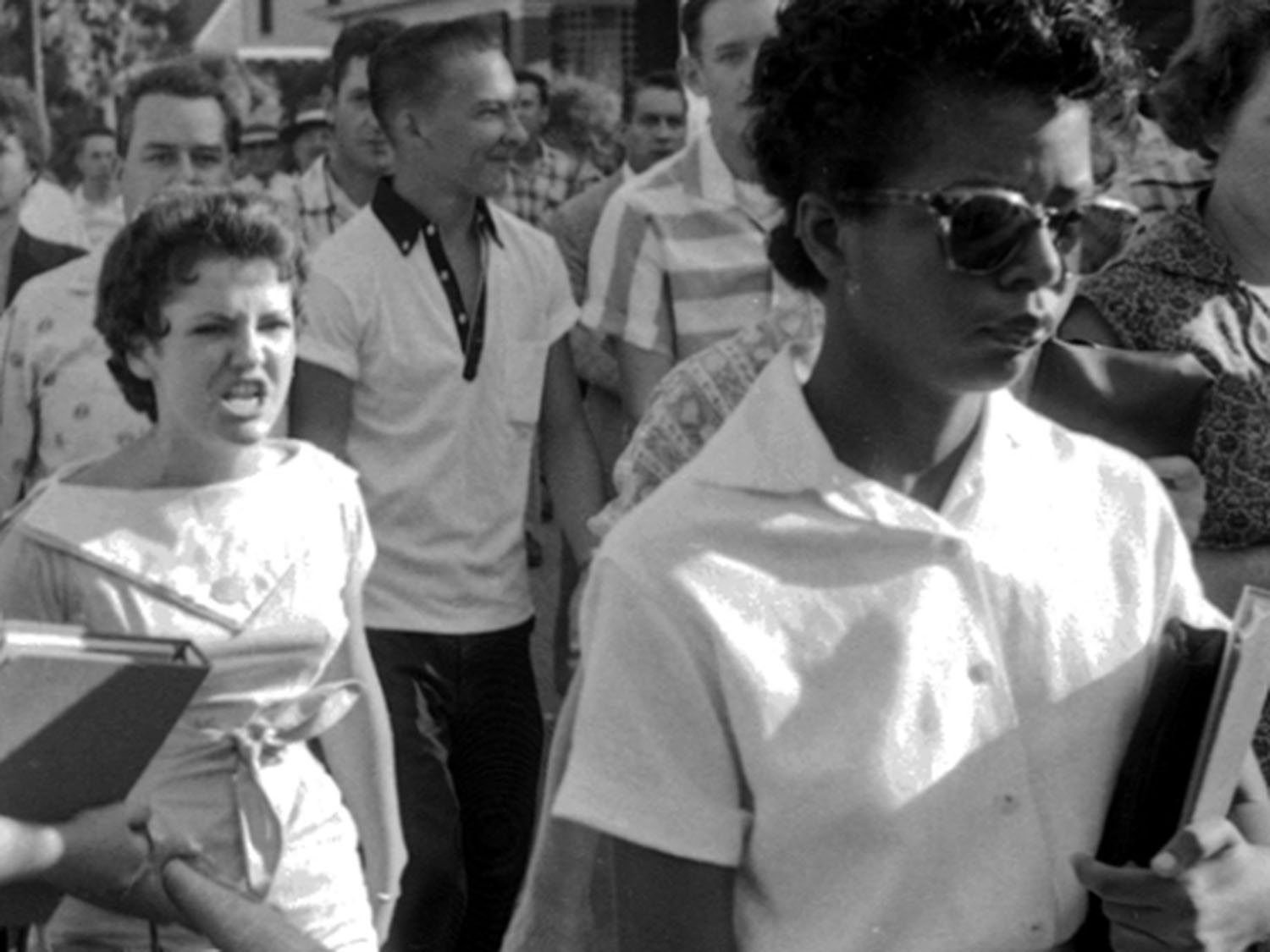 Elizabeth Eckford (right) attempts to enter Little Rock High School on Sept. 4, 1957, while Hazel Bryan (left) and other segregationists protest. The book <em>Elizabeth and Hazel</em> chronicles not just that event but the months and years that came after in the two women's lives.

In 1957, about 400 white protestors screamed and yelled at 15-year-old Elizabeth Eckford as she attempted to integrate Central High School in Little Rock, Ark.

You’ve probably seen the historic image that photographer Will Counts snapped that day: It shows hundreds of angry whites (many are adults) screaming at a 15-year-old girl who walks past them cradling a notebook in one arm. One of the most recognizable faces in the photo is the contorted hate-filled face of a young white girl, Hazel Bryan Massery who stalks and then stands behind Eckford screaming epithets, characterizing the rage of the Jim Crow South.

Since life always moves forward (never backwards) – even after raw, ugly racial unrest surfaces, like it did in Little Rock in 1957 – and in Charlottesville, Va. in August 2017 – well, this is the point. The clock’s hands did not quit moving in 1957. And time still moves forward in 2017. Or put it this way – look at what happened to both 15-year-old girls after they stepped out of this now-famous scene.

Eckford, about five decades later, described what she did after National Guardsmen blocked her path. She could not enroll in Central High that day. So she walked back to the bus stop and sat down on the bench to wait. She said she could not stop sobbing. A reporter Benjamin Fine said she reminded him of his own 15-year-old daughter.

So he sat down next to her on the bench and said, “Don’t let them see you cry.” Soon, a white woman Grace Lorch joined them and walked her to the bus.

This is what happened next.

Eckford said in a Sept. 24, 2007 Vanity Fair interview, “There are times … when you know you need your mama,” Eckford said, describing what she did after she walked away from the mob scene, sobbed, and stepped on the bus.

She went directly to the basement of her mother’s school, where the laundry was located. “Elizabeth found her looking out the window; simply from her posture, she could tell she’d been praying. When her mother turned, she could see she’d been crying too. Elizabeth wanted to say she was all right, but neither of them could speak. Instead, they embraced then headed home.”

Did you notice the obvious? Life turned ugly but (still) moved forward not backwards. In other words, Eckford celebrated another birthday. The city closed its high schools the next year. Eckford did not graduate from Central High School but earned her high school diploma in correspondence and night classes. She earned her bachelor’s degree at Wilberforce University.

Later, Eckford served in the U.S. Army for five years. She also worked at newspapers in Alabama and Indiana. She held other positions including history teacher. She is a probation officer, according to America.gov.

Of the brutal scene that occurred in front of the formerly all-white high school nearly 60 years ago, Eckford said decades later, “True reconciliation can occur only when we honestly acknowledge our painful, but shared past.”

Now, shift your gaze to Hazel Bryan, the 15-year-old girl who was screaming at Eckford in 1957. “After the photo became public, Hazel Bryan Massery started to receive hate mail, all from the North,” David Margolick wrote in The Telegraph on Oct. 9, 2011. Margolick is also the author of the 2012 book, “Elizabeth and Hazel.”

Specifically, this is what happened next. Her parents took her out of Central High and enrolled her in a private Christian school. “Hazel’s parents … found her sudden notoriety sufficiently alarming to pull her out of the school,” Margolick wrote.

As time passed, the snarling angry white 15-year-old girl appeared to change. She “became increasingly political, branching out into peace activism and social work,” Margolick wrote. She worked with minorities as a volunteer.

Her husband, Antoine, joked that her altruism was really her way of atoning for the famous photo. Time moved on and in 1962 or 1963, Hazel Bryan Massery sat in her trailer in rural Little Rock in which she and her family now lived, picked up the Little Rock directory, and looked under “Eckford.”

She dialed Eckford’s number. Between sobs, she told Elizabeth that she was that girl, and how sorry she was. Elizabeth was gracious. The conversation lasted a minute, if that. In the South, in the ’60s, how much did the two (now in their 20s) have to say to each other?

Time moved forward. Eckford and Massery formed a relationship–the type that often goes up and down. In 1997, they went to the anniversary commemoration for Central High School. As the clock inched onward, these two, now 40-something-year-old women, went to a home and garden show. They shopped for fabrics together. They heard Maya Angelou read poetry together.

Time ticked by. These two, now 50-something-year-old women, attended a racial healing seminar and discussed race relations in a group of 20 every Monday night for 12 weeks.

The problem is as time moved on they never talked openly and honestly about what truly happened the day that their paths crossed in 1957 in front of Central High.

Hazel Massery said, ‘‘There wasn’t much conversation about it, really.’’ That day she was “just hamming it up and being recognized – getting attention.” It wasn’t worth remembering. Maybe she had a block.

But Elizabeth Eckford did not buy it. She asked Hazel, “After you saw [Counts’] pictures in the paper, you don’t remember how you felt or what people close to you talked about?”

Their relationship slowly fell apart. It was on life support when it finally fizzled and died in 2000. They went to a local restaurant for catfish to meet Cathy Collins, the sociologist who had conducted the racial healing seminar. Collins planned to write her dissertation on the two of them, and wanted to discuss the project.

But, they told Collins it was over. Turns out, they had fallen out over the famous photo, which had been changed into a poster. Above the two girl’s heads on the poster was the word, “Reconciliation.”

Specifically, Elizabeth changed the Reconciliation poster – the famous photo of them that now hung in the office of the principal of Central High. Elizabeth stuck a small sticker, resembling the surgeon general’s warning on cigarette packs, in the upper right hand corner. “True reconciliation can occur only when we honestly acknowledge our painful, but shared past.”

Hazel didn’t like it. She said their great experiment was over.

Of the clock’s relentless march toward the future, Margolick said there is still a bond between Elizabeth and Hazel, silent but complex, that endures.