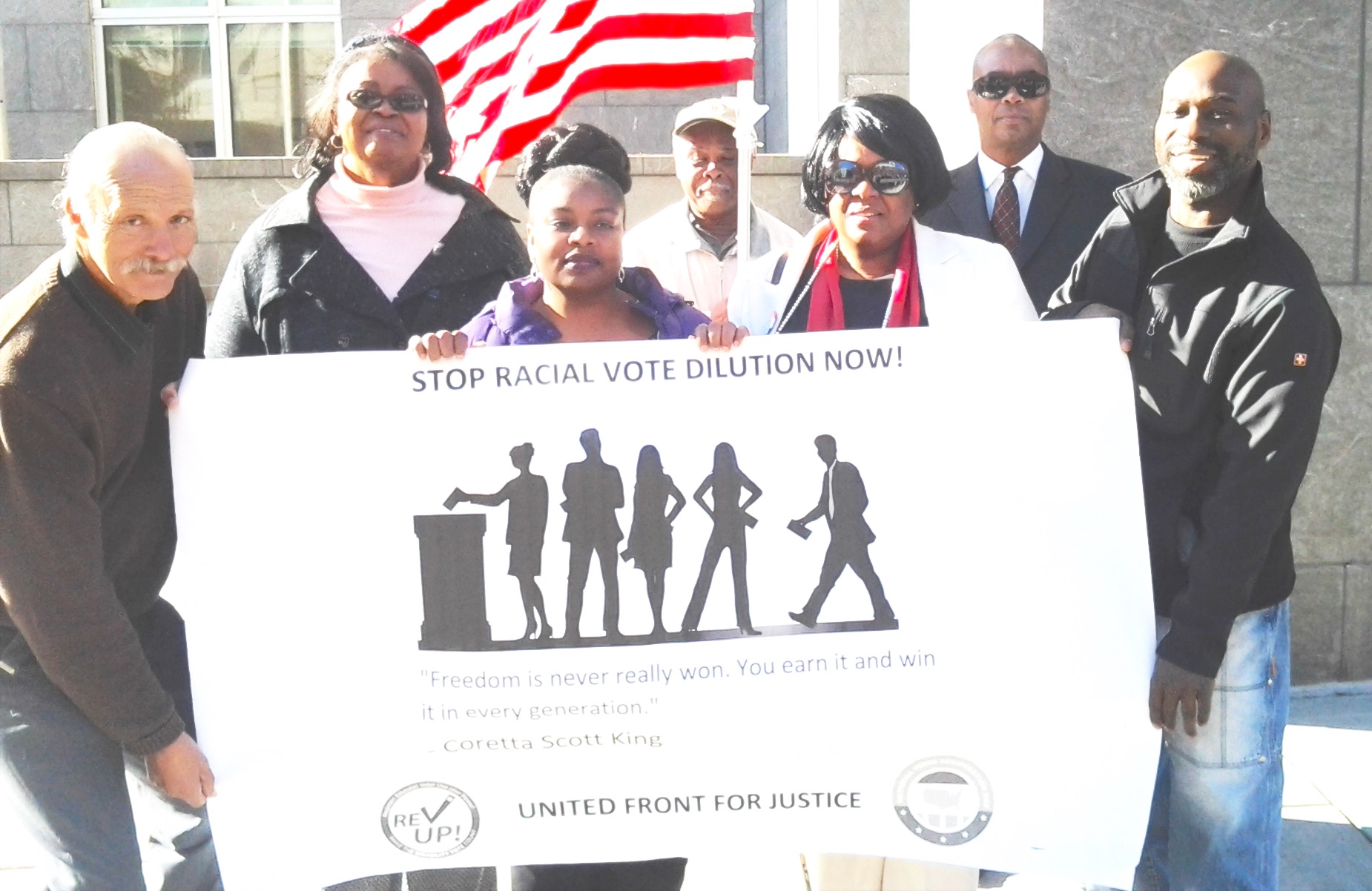 Latasha Holloway, a resident of Virginia Beach, has filed a suit demanding a change to the way Virginia Beach elects its city council, charging it violates the voting rights of minorities.

Holloway, a housewife, said the suit is inspired by her inability to get a response from city school officials and the Virginia Beach city council to questions she has raised about allegations of abuse of her special-needs son at Rosemont Elementary School.

“I could not get the principal or the staff to respond to my questions about how they physically abused my son which was caught on a video camera,” she said. “All of the city officials have been told not to respond to my questions. The current system deters the concerns of minorities and even poor Whites from being heard. So if we can change the way council is elected, we can choose people who will listen to our concerns and speak up for us. Until the system is changed, that is going to continue.”

Holloway, accompanied by representatives from the United Front for Justice (UFJ), a civil rights group, and other activists filed the suit November 20 with the U.S. District Court for the Eastern District of Virginia, Richmond Division. The UFJ has been active in calling for the removal of confederate statues from city or state-owned land and other civil rights issues facing poor and minority people.

Roy Perry-Bey, who heads UFJ, said the group supports “Ms. Holloway’s efforts because the City of Virginia Beach has resisted the developing trend toward single-member districts in order to maintain its 111-year-old at-large scheme that operates to dilute minority voting power.”

The suit, “Holloway vs. City of Virginia Beach”, says the city’s current at-large election to the city council has the effect of unlawfully diluting or minimizing “minority voting strength” and equal opportunity to elect candidates of their choice. This, the suit reads, violates Section 2 of the Voting Rights Act of 1965, and the First, Fourteenth and Fifteenth Amendments to the U.S. Constitution. It notes the city’s charter instituted at-large elections in 1906 as a means to promote racially discriminatory objectives.

According to the suit, from 1906 until 1986, every member of Virginia Beach’s city council to hold office was White. And since 1986, only three Blacks have been
elected to the panel.

African Americans currently make up 19 percent plus of the city’s population. Virginia Beach is the largest city in Virginia. It is the only city in the Hampton Roads region which does not have a Black or other minority representative sitting on its council.

The suit claims that dilution of the Black voter occurs because of the nature of the system the city uses to elect council.

Virginia Beach runs a hybrid district and at-large system of electing council school board. There are seven districts, three at-large seats and the mayor is elected at large.
The point of the Holloway’s suit is that a candidate running, for example, in the Kempsville district, receives votes from residents in that respective voting district. But people from other districts at-large are able to cast votes for that district’s candidates as well.

Local NAACP and other civil rights activists in the city have complained for several decades, that the choice of a candidate is nullified or overruled by voters from outside the district.

Portsmouth, which has a majority Black population, and Chesapeake also use at-large systems of electing council and school board.

Chesapeake has only one Black council member today. But at one time recently, Chesapeake had as many as four Blacks on council.

Norfolk, Franklin, Suffolk, Hampton and Newport News use district systems in the form of wards or boroughs.

Most cities use the same system for electing council and school board.

Norfolk shifted to a ward-based system of electing school board two years ago. Next year it will have the second round of elections for that panel.

Holloway said in June she filed a complaint at the Beach’s Rosement school after her son was physically removed and placed in an isolation room in the school when he became non-compliant to a teacher directions.

She has filed a complaint with the city’s Domestic and Juvenile Court system, claiming her son was abused by school personnel. She said the case will be heard January 20.

“My son has an emotional disability,” she said. “He is prone to physically and emotionally becoming unresponsive, but he can be redirected to respond to commands uttered by teachers. But on this day in June, the teacher drug him out the classroom, claiming that he was aggressive. And they placed him in an isolation room and restrained him. I did not know they had an isolation room and in an elementary school.

“I talked to the principal and he could not give me any satisfactory responses to my concern,” she continued. “Nor would the superintendent’s office or the school or council… all of whom have been told not to respond to me.

“Yes, I am a Mama Bear who is protecting the rights of my child and other people who believe their voice has not been heard by the school and city council officials,” she said.