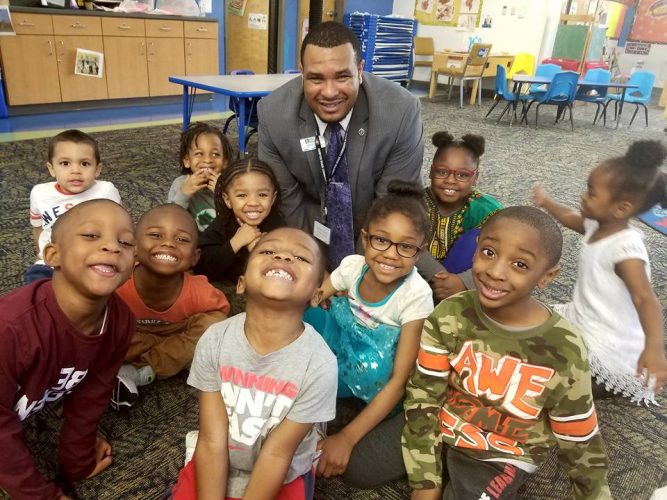 According to a new study, less than 5 percent of African-American children grow up in the kind of neighborhoods that most foster upward mobility.

Carlos Clanton grew up in such a neighborhood. Specifically, Clanton grew up in a single-parent home in Lambert’s Point and Park Place. This past January, Clanton, 38, launched his candidacy for the Norfolk School Board on a Facebook post, which has had more than 8,000 views. This is the point. Clanton resembles the 20-million children in this new study.

In plain terms, the subjects in this new study are now age-30-something adults. The new study, “Race and Economic Opportunity in the United States,” was compiled by Stanford, Harvard, and U.S. Census researchers. They focused on children born from 1978-1983.

Clanton’s ongoing success story not only answers this question. It also shines a glaring light on millions of now-age-30-something adults who are successful – but grew up in low-income neighborhoods, with absent fathers, and stubborn generational income gaps. On the one hand, Clanton’s success is tied to his willingness to firmly grab hold of each rung of the ladder. On the other hand, his success story clearly shows that income does not have the final say on upward mobility.

“I have steadily advanced because of personal determination that was fostered by my family, church, and greater community, as well as my teachers. That was a big part of it,” said Clanton, a 2004 Old Dominion University graduate, who is serving his second term as the president of the National Urban League Young Professionals.

Of his steady ascent, he said, “It comes from the perspective of what can happen when you have individuals in your community who care about you. There are many positive people and things available in any community but the individual has to take advantage of them. At a young age, I latched on to my mentors. Everybody has heard the old adages about what leads to success. You know the one that says, ‘It’s what you know.’ ‘Or you know the old adage that says: It’s who you know.’ But I truly believe success is based on ‘Who knows you.’ I have been very intentional about the things I have done in life.”

For eight years, Clanton served as the executive director of the Norfolk Education Foundation. In 2017, Gov. Terry McAuliffe appointed him to the Commonwealth Commission on Diversity, Equity, and Inclusion. He currently serves as the senior director of resource development and community relations for the Hampton Roads Community Action Program.

“But this new report demonstrates there is still work to be done,” said Clanton pointing to recommendations in the new study. Specifically, the new report identified “a few approaches” that could reduce the disparity gaps: mentoring African-American boys, reducing racial bias among whites, reducing discrimination in criminal-justice systems and increasing interaction across racial groups.

“Mentoring programs and community based programs are still vital,” Clanton said. “But I was exposed to a lot of different things early on. For example, I’m a Black opera singer. And I had quite a few mentors. Two that stand out are Elder Willie Moody, the minister of music at First Baptist Church-Lambert’s Point (now the minister of music at New Calvary Baptist Church). I met him at age 11. Another one of my mentors was Duane Bushey. He was my career and technology education teacher at Maury High. I still communicate with them to this day.”

Here are more highlights from the new study. Black and Native American children have large intergenerational income gaps relative to whites that not only launch income disparities but also cause them to “persist across generations,” the new study noted.

Here’s another highlight. African-American and white men who all grow up in two-parent families with similar levels of income, wealth, and education–well, the new study showed that African-American men “still have significantly lower incomes in adulthood.”

The study also noted that African-American and white women with similar family incomes have comparable incomes “despite having much lower test scores.” This suggests that tests do not accurately measure differences in ability. “Environmental conditions during childhood have causal effects on racial disparities,” the study noted.

Clanton said, “When I look at this report, I feel there are many opportunities that we can offer children to help them close the gap. It is important that we do not allow a zip code to determine if a child is going to be successful.”

Clanton added, “A number of students live in concentrated areas of poverty. We need to get rid of the barriers by exposing children to different opportunities like cultural arts, technology, and science. This will allow them to see various career opportunities. We also need more individuals in our schools who reflect and look like the children they are serving.”

Clanton said he launched his campaign after he and his mother, Patricia Clanton, had a long conversation in June 2017, shortly before she passed away. “She told me she was proud of me. She told me, ‘Don’t stop. Keep going.’ That was the seed that was planted in me.”

In other words, for a long list of reasons Clanton is knocking on doors, has more than 100 volunteers supporting his campaign, as he continues to climb the ladder of success.