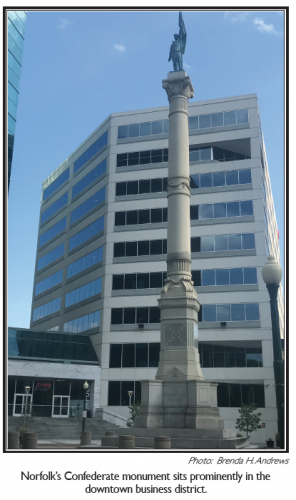 A coalition of groups has begun lobbying the Democratically-controlled Virginia General Assembly to amend the statute which forbids locales from removing Confederate Statues.

To highlight their efforts, on January 8, various groups supporting the monuments removal held a rally on the Virginia Capitol grounds on the opening day of the 2020 Legislative session.

Among those groups was the Christians United for Social Change (CUSC), a partnership of Norfolk’s First Lutheran Church, a mostly white congregation, and the Basilica of Saint Mary of the Immaculate Conception, a historically Black Catholic church.

The speakers were allowed two minutes to urge state legislators to amend “the Protection Statue Virginia Code §15.2-182” which deters cities and counties from removing the monuments, from public spaces.

Many of the monuments, such as the one located on Commercial Place in downtown Norfolk, were built during the early 1900s.

They were built to highlight the reasons for the Civil War: Southern States’ rights to practice slavery and White Supremacy.

According to Elizabeth Janik, one of the leaders of CUSC, the January rally was conceived during a meeting of the group at First Lutheran on January 6.

Janik, a member of First Lutheran, said CUSC and other groups are calling for the wording of the existing Amendment to be changed to allow the local governments to determine the fate of the monuments.

She said this would allow communities such as Norfolk, Charlottesville, Portsmouth, and others to remove the monuments being sued by conservative groups opposing their removal.

“We want the cities and the counties to decide for themselves,” said Ofelia Wattley, a member of St. Mary’s. “Conservative groups are always talking about local communities having control. But they don’t support this effort. We want citizens who want these monuments removed to call their local lawmakers and help us lobby for the change, especially those groups which have been marginalized and oppressed over the years.”

The Norfolk City Council voted unanimously in August of 2017 to remove its Confederate Monument downtown. It would be moved to a local graveyard. But the city has paused seeking clarity from the courts and the Attorney General about its right to do so.

The courts have refrained from doing so. But Virginia Attorney General Mark Herring has said that locales did not have to adhere to the statute injected into the Virginia State Code in 1997.

The United Front for Justice, (UFJ) has filed a suit to force Norfolk to apply its resolution and remove the towering monument in downtown Norfolk.

Roy Perry-Bey, a leader of the UFJ, said the state statute has no bearing on Norfolk. He said that in 1997 when state lawmakers created the protective statute, it referred only to the counties and not cities.

The monument was built in the 1890s. Norfolk became a county in 1845, breaking away from the massive Norfolk County, which was created during the colonial period and covered most of Hampton Roads.

Plus the city owns the statue and sanctioned the building by the United Daughters of the Confederacy which organized its construction.

Janik is a part of Monumental Justice Virginia, a statewide movement of Virginians who believe that local communities should be able to make local decisions about the Confederate statues in their public spaces.

Janik said along with the Democrats controlling the General Assembly, there are several sponsors of the bill to amend the statute.

The legislation has been endorsed by organizations around the state, including Virginia First Cities and organizations in Norfolk, Richmond, Northern Virginia, Louisa, and Charlottesville.

The bill, Janik said, has been filed with the Cities, Counties and Towns Committee, chaired by Democrat Kaye Kory 38th district in Fairfax County.

When Republicans controlled the House of Delegates, measures to amend the law were killed.

“Hopefully, this time, it will not be buried and not allowed to see the light of day at a 7:30 a.m. meeting that no one attends,” said Janik. “This bill does not call for the destruction of the monuments. It only calls for locales who want to remove them out of public spaces to so.

“We are concentrating on the Confederate monuments and not the ones dedicated to the heroes who fought during WWI or WWII or other wars.”

“Take ‘Em Down Cville,’ the Charlottesville affiliate of the Monumental Justice Virginia, also attended the event. It was created in the wake of the White Supremacy March in 2017 in August.

“People in communities all over Virginia want the right to decide how their public spaces reflect their community values,” said Jalane Schmidt, a University of Virginia religious studies professor,

Charlottesville public historian, and a Monumental Justice Virginia organizing committee member, she said, “Monuments to the Lost Cause of the Confederacy don’t reflect our Charlottesville values.”

“Since the events two years ago in Charlottesville, Richmond anti-racist activists have re-doubled our efforts to protest these monuments, but we need a change in the state law.”

Janik said her group is the Norfolk affiliate of Monumental Justice. “Confederate monuments are a symbol of institutionalized racism and a painful reminder of Virginia’s past; they do not represent the proudly diverse, inclusive vision that we have for Virginia today,” she said.

“Norfolk and other localities deserve local authority over the stories and symbols in our prominent public spaces. We fully support the decision of Norfolk City Council to relocate the Confederate monument in our downtown to a nearby cemetery, and we hope that in 2020 the General Assembly will allow this long-overdue action to occur.”

Though the Charlottesville City Council voted unanimously in 2017 to remove the statues of Robert E. Lee and Stonewall Jackson, it has been prevented from doing so by a local judge’s interpretation of Virginia’s war memorials law.

“Most of these statues across the South were erected in the early 1900s, many decades after the Civil War, by white leaders as part of a campaign of intimidation and disenfranchisement of their African-American neighbors,” said former Charlottesville City Councilor and Vice-Mayor Kristin Szakos. “They memorialize the Confederate dedication to slavery and white supremacy, and our communities should not be forced to venerate that cause embodied in these monuments.”

The city of Norfolk recently filed a lawsuit against the Attorney General of Virginia to move a Confederate monument in that city. The new bill in the 2020 General Assembly will amend that law to allow localities around Virginia to make their own local decisions about what to do with their local monuments.