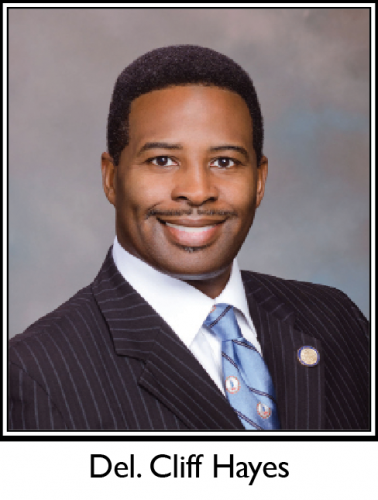 Norfolk State University (NSU) will be the home of a new policy think-tank, thanks to legislation approved to fund it during the 2019 General Assembly session.

According to Democratic State Delegate Cliff Hayes of Chesapeake, he was successful in engineering a bill through the General Assembly which will create The NSU Center for African-American Public Policy, (CAMPP) starting next academic year and based on House Bill 1700.

Hayes said the $300,000 in state funds creating the center will be available when the new state budget goes into effect July 1.

Delegates Hayes, Jerrauld C. Jones, Jr., Marcia Price, Lashrescse Aird and Lamont Bagby were among the key sponsors who supported the bill which made the CAMPP a reality.

According to the bill’s sponsors the center will be a non-partisan entity which will study policy issues related to civic and political engagement in the African-American community in the region.

“There are a myriad of issues related to city and state government, education, and other issues facing the African-American community,” said Hayes. “It will have a staff which will research and develop policy ideas to be used by the university and the general public.”

The Virginia’s General Assembly hoped to address the rising college tuition costs by offering public universities incentives to cap tuition rates and ensuring that the public can comment on proposed tuition increases.

State budget amendments proposed by the House Appropriations Committee, on which Hayes serves, include an additional $45 million in funding for universities that decide not to raise tuition next year..

Under the proposal, each university that freezes tuition rates for the year would receive a share of the $45 million. Large universities, like Virginia Commonwealth University, George Mason, Virginia Tech and the University of Virginia, would receive $5 million to $6 million in extra funding.

The Virginia General Assembly passed a bill creating an independent 16-member commission that will draw the maps for the state’s voting districts after the 2020 Census.

But a number of members of the Virginia Legislative Black Caucus (VLBC) oppose the measure claiming that there is no guarantee that a Black lawmaker or civic leader will be included among its membership.

The proposal passed the House of Delegates and the Senate on the final day of the 2019 session.

The bipartisan commission will be made up of eight citizen members and eight members of the General Assembly — four from the Senate and four from the House.

The measure was a victory for lawmakers and civil rights groups hoping to deter either of the political parties from controlling the redistricting process and gerrymandering the districts to benefit the two respective parties politically.

The political party which controls the governor’s mansion or either both or one of the houses of the General Assembly controls how those state and federal voting districts will be drawn.

Republicans just lost a federal court case, filed by a group of Black Democrats, claiming the party in 2011 drew 11 State House Districts which packed Black voters in them.

This made adjacent House districts more white and Republican and the federal court, after the lawmakers could not do it, redrew the districts creating more Democratic leaning districts, when it removed large numbers of Black voters from their majority Black districts.

“But this measure does not guarantee that an African-American lawmaker or civic leader will be on that panel,” said Democratic State Delegate Cliff Hayes, who represents the 77th District lodged in Chesapeake.

Hayes’ district lost the most Black voters, but not enough to jeopardize his chances of winning election. He said those voters were placed in other Republican districts which may give another Democrat a chance to secure a seat in the House of Delegates.

“But the main concern of Black Caucus members is the possibility that we will not have a voice in how the new districts will be drawn,” said Hayes. “And we question if it will be 100 percent independent with the fact that members of the House and the Senate will be named to it.”

Del. Lamont Bagby, D-Henrico, the chairman of the Virginia Legislative Black Caucus, said, “We have great concerns about having African-American representation in the room for redistricting. And this doesn’t guarantee that.”

The Senate voted 40-0 to pass the measure and the House of Delegates voted 83-15, with 14 Democrats and one Republican, Del. Lee Ware, R-Powhatan, dissenting.

Democratic State Delegate Joe Lindsey, who represents the 90th District in Norfolk, called the plan “piss-poor,” saying it was only a modest improvement over an earlier Republican proposal that the entire Democratic caucus opposed.

“There are some that say that we’re not abdicating our authority,” Lindsey said. “I’d say that’s exactly what we’re doing.”

The proposal states that all the commission’s meetings would be open to the public and all its records and communications would be considered public.