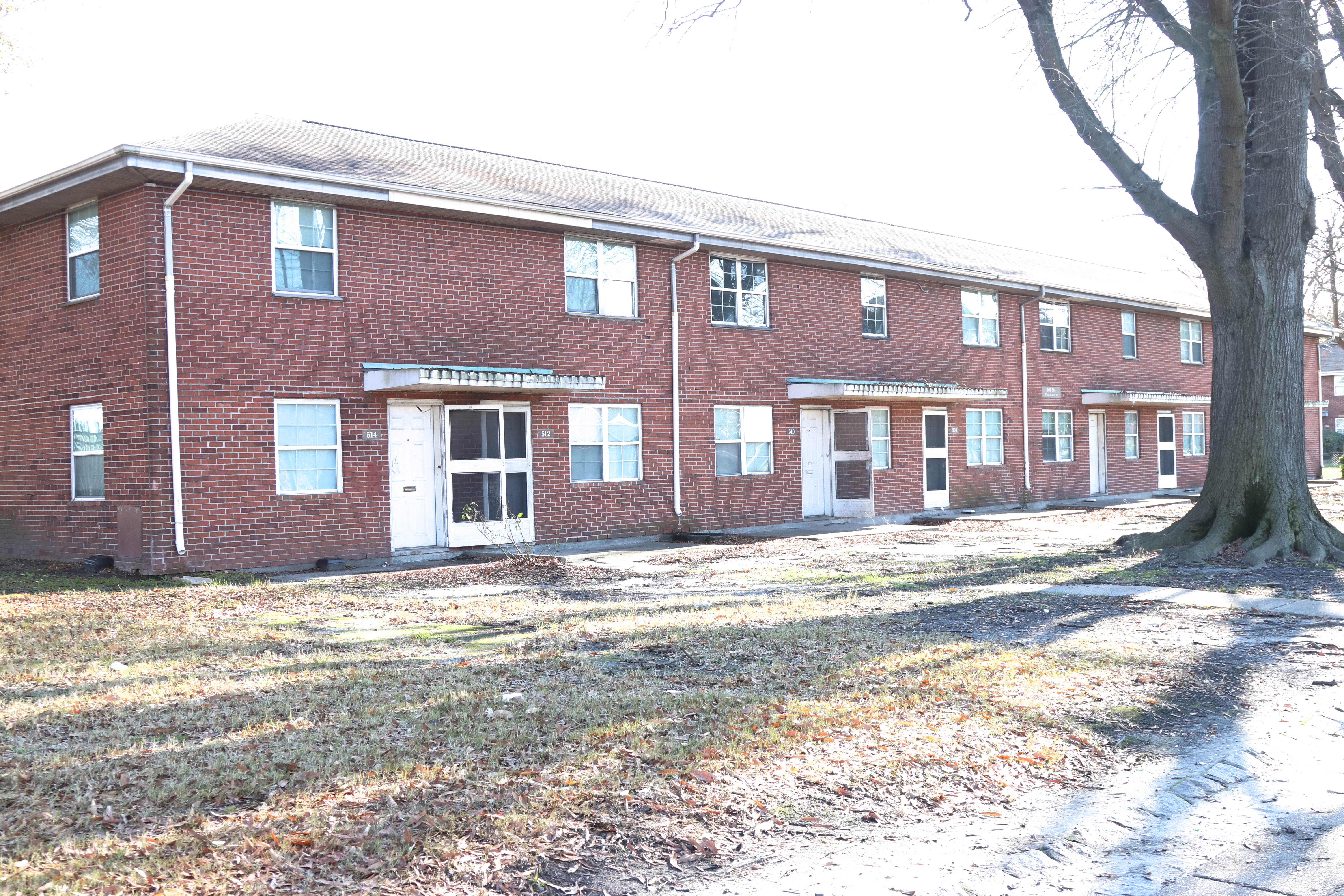 Three years after the development of the St. Paul’s Quadrant started, Norfolk Redevelopment and Housing Authority (NRHA) says half of the 1,276 residents in the Tidewater Gardens housing community have been relocated to make way for new development.

The project is in Phase One and at this point, there are 187 of the 618 units in Tidewater Gardens which are being targeted for demolition. Thus far 140 of them have been emptied of families and individuals.

Only six of those units targeted during this phase have been demolished.

As NRHA and the City of Norfolk proceed with the project, plans to rebuild replacement housing has

begun in the St. Paul’s area, starting along Fenchurch.

Also, long-time businesses which sat in the redevelopment area, such as McDonalds and a convenience store facing St. Paul’s Blvd. have closed. The restaurant has been closed and the store has been razed.

The vacant land which sits next to the Hampton Roads Transit Transfer station and two blocks from several historic Black churches will be used to build new housing stock.

But apart from these early moves related to the development, media coverage of the development has highlighted concerns and tensions between NRHA and the city, advocates, and residents.

Last week, one of the most active and critically vocal members of the Mayor’s St. Paul’s Advisory Committee, says he was notified unexpectedly that his two-year term of service had expired and he would not be reinstated, along with two other members of the council.

Lavonne Pledger, who lives in the Young Terrace Community, one of the three housing communities targeted for razing and redevelopment said he was removed from his seat.

To avoid some of the “mistakes” that the city and NRHA have made in the past in relocating people and demolishing their homes in low-income and blighted communities, Norfolk City Council created the 16-member committee.

It is composed of resident leaders and residents from the three affected housing communities, leaders from nearby churches, businesses, and nonprofits such as the Southeastern Virginia Food Bank, which serves the area.

Pledger’s position on the advisory council, according to the city clerk’s office, was categorized as a resident representative from Young Terrace.

According to the city clerk, Allen Bull, Pledger’s three-year tenure on the panel did officially run from February 2018 to February 2021.

Pledger, who was one of the most active members of the committee and had a good attendance record, according to the city clerk’s office, received a letter on March 18 noting he was no longer a member of the committee.

But he was also one of the most critical of the city’s redevelopment plans in the St. Paul’s area, even during panel meetings.

Pledger’s family experienced relocation and redevelopment of the city’s historic Ghent Community back in the 60s. In an August 2018 edition of the GUIDE, Pledger vowed to advocate for the people of St. Paul’s.

He said he wanted to deter the city and NRHA from pushing the public housing residents of St. Paul’s from one impoverished section of the city to another.

When the only grocery store closed in the St. Paul’s area last year, he and other residents organized a food collection and distribution drive.

He and other activists are pushing the city to restore a grocer to the area which is now deemed a food desert.

Pledger also has spoken at protest events organized by the activists’ group New Virginia Majority and other advocacy groups for the residents being displaced by the redeveopment plan.

Four named residents in the St. Paul’s area, the Residents of the St. Paul’s Quadrant Tenant group, and the New Virginia Majority, are plaintiffs in a suit filed early last year against the city, NRHA, the Housing and Urban Development (HUD), and Ben Carson, the former HUD secretary.

The suit claims the plaintiffs, led by the city, are razing the three housing communities and forcing residents to live in the segregated and impoverished parts of the city.

It calls for the city to band its current plans and build affordable housing in the current area for current residents instead of gentrifying the area for middle-income families and individuals.

City Communications officials have placed a gag order that forbids city officials and NRHA operatives from speaking out publicly about the redevelopment plan until the federal courts decide to move forward or reject the merits of the suit.

But on March 17 on Black Entertainment Television (BET) the St. Paul’s Redevelopment was highlighted on a series called “Disrupt and Dismantle.” The series depicts the impact of systemic economic racism against African Americans in the nation. On its website, BET writes this about the series. “From environmental racism to police brutality to the school-to-prison pipeline, Soledad O’Brien explores inequalities Black communities face and the actions that need to be taken in order to achieve lasting change in the U.S.”

O’Brien, a nationally acclaimed journalist, and a production crew converged on the St. Paul’s area where she sought to connect the dots of Norfolk’s historic redevelopment projects and their negative impact on the city. The goal, according to BET, was to examine how communities like Norfolk can improve economically without removing low-income citizens.

Critical reviews of the report, however, have said O’Brien’s reporting was not balanced with images of new mixed-income communities which have replaced old public housing areas.

Notably, in Norfolk, O’Brien looked at the upscale Ghent community project of the late 1960s and 70s that required the razing of low income and dilapidated housing, some of it owned and occupied by Black families.

There was an understanding that the Black residents who lost their homes would be allowed to return once the area was completed; however, that did not materialize because the price of the new housing was beyond their reach, critics say.

Pledger was featured in the documentary as the BET production crew captured images of him and his family at his home in Young Terrace.

The next day he said he received a letter from the Chair of the 16-Member Advisory Committee, 7th Superward Councilperson Danica Royster.

Royster was appointed to the council earlier this year. She replaced Angelia Williams Graves who ascended to the House of Delegates representing District 90.

According to the city clerk’s office, Pledger and the others who were removed from the committee were granted tenure from February 2018 to the February 2021.

Traditionally, the city clerk’s office calls and contacts appointees to determine if they want to continue serving or alert them that their tenures have ended.

But it seems Royster sought to handle that task herself, the Clerk’s office told the GUIDE.

Pledger said he even attended the March meeting of the Advisory Committee where he was engaging with questions and other input.

But he said he was not aware nor told that his tenure had expired by the Chair or other city officials on hand at that meeting.

Nor does he recall reading any documents which detailed such specific information.

Further, the council met to discuss appointing some 48 people to various committees and commissions.

Pledger said he believes appearing on the BET documentary and being openly critical of the city to a national audience was enough to rile city leaders and boot him from the panel.

“That just shows you can’t say anything bad or be critical of the city,” said Pledger, who is a fitness trainer. “But I will continue to advocate for the people of St. Paul’s despite the lies and propaganda being issued by the city.

Pledger and other housing activists say that while the city claims to be moving residents from structurally eroding and flood-prone Tidewater Gardens to “areas” of economic opportunity, it’s just the reverse.

Advocates said many residents are being relocated to other low-income sections of the city.

“My biggest worry is that the city will continue to remove people and they will be homeless,” Pledger said. “I think they are not being given the options to areas of opportunities that are not food deserts. They are just moving people from one poor and underserved

neighborhood to another. That’s not opportunity.”