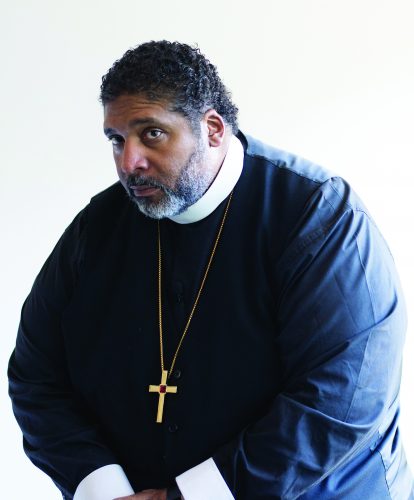 Rev. William Barber has served as the President of the North Carolina NAACP, and in that capacity, he led weekly protest marches he launched in 2013 to the state capitol calling attention to unfair laws of state legislators.

Every Monday, for months, protesters congregated in front of the North Carolina General Assembly building. Their numbers rose from the hundreds into the thousands, week by week, becoming known as the “Moral Mondays” protesters. They fervently opposed measures of the Republican-led state legislature that cut unemployment benefits, turned down federal funding for Medicaid, and restricted voting, among other issues.

Barber resigned in 2017 from the presidency of the North Carolina NAACP, to renew a 50-year-plus unfulfilled mission of the civil rights movement led by Dr. Martin Luther King, Jr. Currently, he and Rev. Liz Theoharis are leaders behind the revived Poor People’s Campaign that Dr. King had begun to work on shortly before his assassination in 1968. The campaign is designed to call national attention to today’s conditions of poor and oppressed people in America.

Like the campaign founded by Dr. King, the modern Poor People’s Campaign is focused on what King described as the “triple evils” of racism, poverty and militarism – with the addition of environmental devastation that disproportionately affects people living in poverty.

Barber’s goal is to put new energy and focus into the civil rights struggle for poor and oppressed people.

Last week, Rev. Barber’s life time commitment of social justice advocacy earned him one of the 25 “genius grants” awarded by the MacArthur Foundation. The prestigious annual honor comes with $625,000, meted out over five years, to help awardees complete their grand designs.

MacArthur Fellows pursue various life paths and their only criteria for award must be that they are “talented individuals who have shown extraordinary originality and dedication in their creative pursuits and a marked capacity for self-direction,” according to the foundation’s website.

The MacArthur Foundation’s grant comes with no requirements or expectations – there is no evaluation of a fellow’s work during the fellowship term. The foundation emphasizes that the grant is a “speculative” prize, meant only to help a fellow’s work continue with the benefit of wider recognition and an unexpected financial boost.

The Fellows Program does not accept applications or unsolicited nominations. Nominators, evaluators, and selectors all serve anonymously and their correspondence is kept confidential. This policy, according to the foundation, enables participants to provide their honest impressions independent of outside influence.

Cecilia Conrad, Managing Director, MacArthur Fellows Program, explained those selected. ”Working in diverse fields, from the arts and sciences to public health and civil liberties, these 25 MacArthur Fellows are solving long-standing scientific and mathematical problems, pushing art forms into new and emerging territories, and addressing the urgent needs of under-resourced communities. Their exceptional creativity inspires hope in us all.”

In its release about Rev. Barber, the MacArthur Foundation wrote the following about him:

“Merging moral and activist traditions, Barber is providing a faith-based framework for action that strengthens civic engagement and inspires the country to imagine a more humane society.”

From 2006 to 2017, Barber was president of the North Carolina chapter of the NAACP and he has been a member of the national board of the NAACP since 2005. He is also a distinguished visiting professor at Union Theological Seminary.

Barber’s publications include the co-authored books Forward Together: A Moral Message for the Nation (2014), The Third Reconstruction: Moral Mondays, Fusion Politics, and the Rise of a New Justice Movement (2016), and Revive Us Again: Vision and Action in Moral Organizing (2018), and he is a contributing op-ed writer for The New York Times, CNN, MSNBC and The Washington Post