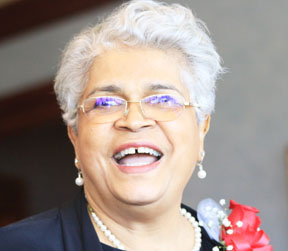 On a warm and sunny Sunday afternoon this spring, The Town Point Club located in downtown Norfolk was the beautiful venue for the 100th Anniversary Celebration of THE WOMAN’S CLUB of NORFOLK. The Woman’s Club of Norfolk, one of the oldest local African American women’s organizations in Hampton Roads, had as their Anniversary theme … “and STILL WE RISE.” On February 18, 1916, Mrs. Dovey Collins, an active community worker, and 16 of her friends met at the Collins’ home to discuss the establishment of a club which would begin as a social outlet. A committee was formed to give the organization a name. The women decided to name themselves “The Needle Craft Art Circle.”

As the club evolved and the women became more civic minded, the name was changed to the Woman’s Club of Norfolk.” They contributed to the Federation of Colored Women’s Club and always sent a delegate to the Federation’s conventions. Meetings were held in members’ homes and included various activities such as a life partnership with the YWCA and a Golden Heritage Membership in the NAACP. The women have spearheaded efforts to encourage voting; improve neighborhood conditions; and educate the community about African American history and culture.

They also petitioned the city of Norfolk to keep open the only Negro/Colored/Black library—the Blyden Branch Library; protested any further cuts in colored teachers’ salaries; purchased gifts, at Christmas, for residents in the Janie P. Barrett’s School for Girls; helped to raise money for Eastern Virginia Medical School (EVMS); and adopted Jacox Elementary School as the club’s special project.

Prior to the beginning of the program and luncheon guests were invited to attend a meet and greet reception. Brenda Neumon Lewis served as Mistress of Ceremonies. Gisele Bullock gave a beautiful Opening Prayer followed by a warm Welcome from President Mercedes Coveney. Cultured Jazz Combo, comprised of students from Norfolk State University and a Norfolk State grad, provided the music for this auspicious occasion. The grace was given by Myrna Simmons.

Following dinner, Lorna Bouldin and Ola Goss gave special mention and recognition to the illustrious Honorary Members of the Woman’s Club. Of the six Honorary Members, Mrs. Claytea Newby and Dr. Evelyn S. Peevy were able to grace us with their presence. Not able to attend were Mrs. Anna Jordan Brinkley; Ms. Patricia Spriggs; Mrs. Laura Brown who now resides in Florissant, Missouri; and Mrs. Hermione Jackson who lives in Union City, Georgia.

One Hundred Years and “Still We Rise” Presentation a short stroll through history of the organization was done by Cassandra Newby-Alexander
RISE: “R”—REMEMBER; “I”— INITIATE described by Miriam Williams; “S”—SERVICE discussed by Carole Sligh Jackson; and “E”—EDUCATE explained by Alveta Green. Michael Hucles proposed the 100th ANNIVERSARY TOAST. Closing Remarks were given by Mercedes Coveney. Special Thanks to Dosh Jackson for his wonderful pictorial board and video of the club and to member Sandra Jackson for her creative talents and the development of the Anniversary Scrapbook. Mrs. Ruth G. Jarvis chaired this afternoon celebrating the 100th Anniversary of The Woman’s Club of Norfolk with assistance from all of the club members.

“Through the years, The Woman’s Club of Norfolk has included 2nd and 3rd generation members; professional women from all walks of life with a long record of personal and community accomplishments continuously since its inception in 1916. Despite changes in membership and changing times, the commitment by The Woman’s Club of Norfolk to be a force in serving the community remains a strong and unifying foal. “… and STILL WE RISE!!!