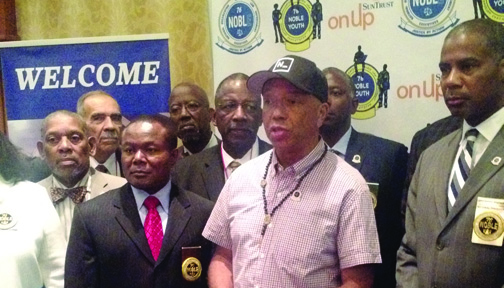 Russell Simmons speaks at a convention of the National Organization of Black Law Enforcement Executives in Washington, D.C. (NOBLE)

Russell Simmons is as afraid of a confrontation with police as most other Black men. However, despite a recent incident in which he was pulled over by cops in the Hamptons, the RushCard co-founder and music mogul is most concerned about the relationship between African-Americans and law enforcement. “I have a healthy fear [of being pulled over],” said Simmons who was a keynote speaker at a convention of the National Organization of Black Law Enforcement Executives (NOBLE) in the nation’s capital on Tuesday, July 19.

“The other day I was pulled over in the Hamptons and I was scared. I was really scared,” he said. “There was a rabbi behind me and [the officer] told the rabbi, ‘You go ahead and keep it moving.’ I told the rabbi to stay right here. I didn’t think they were going to abuse me, but I was scared.” Simmons remarks came after recent tragic events involving police officers and young Black men in Baton Rouge, La., Falcon Heights, Minn., and Dallas, Texas.

At the NOBLE conference, Simmons and RushCard announced the expansion of their partnership and support of The Peace Keepers, a nonprofit whose goal is to maintain peace in communities where gun violence is high and whose mission is to bridge the growing wedge between law enforcement and the African-American community. The Peace Keepers are also partnering with NOBLE in an effort to strengthen relationships between the Black community and law enforcement. Simmons spoke of building stronger relationships between communities and the police, restoring community faith and trust in law enforcement.

He also discussed ways to reduce community deaths at the hands of law enforcement as well as methods to help eliminate violence towards police officers. “My heart is broken for the families of Alton Sterling, Philando Castile and the law enforcement officers in Dallas who senselessly lost their lives,” Simmons said. “While I am saddened and outraged, I realize that throwing my hands up in frustration won’t accomplish anything,” he said.

Simmons continued: “RushCard is prepared to help finance The Peace Keepers and the valuable work [The Peace Keepers founder] Captain Dennis Muhammad is doing in communities throughout the country. I also look forward to partnering with NOBLE to bring law enforcement to the table to build bridges that will ultimately save lives.” Muhammad, who also attended the NOBLE conference, said men in particular and the community in general must take responsibility to help make their neighborhood a decent and safe place to live. That also means working in partnership with law enforcement, he said.

“However, due to the recent national attention of police misconduct and controversial shootings of young Black males, police and community relationship is at an all-time low,” Muhammad said. “The lack of trust and respect with the police or the ‘Them vs. Us’ is not new. It goes all the way back to the Civil Rights era where we would watch on TV police sick the attack dogs, use fire hoses, beat the marchers with night sticks, and we have also seen them use the butt of their guns. These images were seen all across America and left a bitter taste in the mouths of Black Americans across the country.”

Muhammad said that we no longer view the police as friends and helpers, we see them as foes or enemies. “We need police, we cannot live in a lawless society. However, we must not go backward, but move forward and not give up on building a relationship of mutual respect with the law enforcement community,” said Muhammad. Further, Simmons said he sympathizes with Black officers who have a tough job.

He said he wants to build a bridge between them and the community and between the Black officers and their White counterparts. “We have 25 cities where The Peace Keepers are funded by RushCard,” Simmons said. “We want to work with police, not only in protecting our community, but building a bridge so the future can be different from where we are today.”