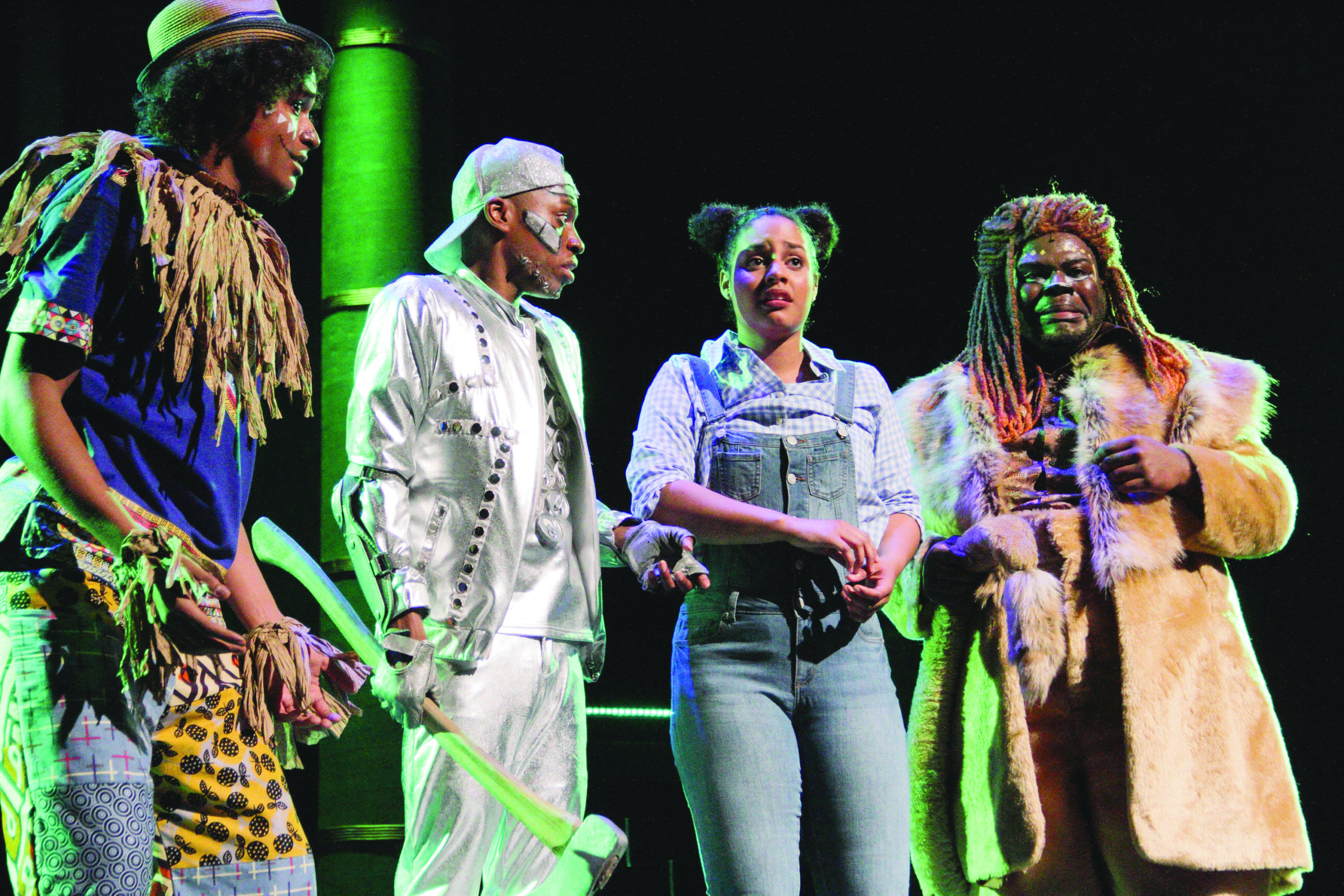 When L. Frank Baum published his classic novel “The Wonderful Wizard of Oz” in 1900, he likely had no idea that the subsequent 1902 Broadway musical adaptation, “The Wizard of Oz,” would one day receive frequent productions featuring exclusively African-American casts. The latest local rendition, jointly staged by Norfolk State University and the Virginia Stage Company, is a colorful, inspired “The Wiz,” blessed with a conspicuously gifted cast.

Staged at the historic Wells Theater and co-directed by the VSC’s Patrick Mullins and NSU’s Anthony Stockard, this “Wiz” is decidedly afro-centric, sweetly laden with subtle African and African-American themes, manifested in scenic designs, choreography, and make-up. A towering African mask predominates the Wiz’s lair and numerous performers’ faces are painted in a fashion that harkens back to tribal Africa.

And then there’s the talent, the directors having elicited performances rich in expressive African-American colloquialisms and culture. The cast delivers, giving naturalistic performances to wholly fantastical characters. Prominent amongst them of course are Dorothy, the Scarecrow, the Tin Man and the Lion.

Alana Houston, who splits her studies as a senior at Elizabeth City’s Northeastern High School and a freshman at NSU, makes for quite an endearing and alluring Dorothy. She is at once appropriately starry-eyed, feisty and compassionate. This young woman can also really belt out a tune.

Though the Scarecrow had been suspended on a post for quite a long spell, he appears to have found fleet feet amazingly fast, only stumbling a time or two. Still, Matthew Jackson’s portrayal of the affable, charismatic straw man remains true. You like him instantly.

While Jonathan Cooper’s Tin Man may have initially gone wanting for oil, you sensed he had found a fully charged battery eons ago. His performance is entirely electric, lightning especially having taken up residence in his tap shoes.

As the comical, rotund cowardly Lion, Darius Nelson is choice, his comic timing impeccable. The actor enjoys his assignment and it shows.

Jackson, Cooper and Nelson are all also talented vocalists and excel in their individual numbers. When they join Houston for the popular “Ease on Down the Road” and “Who Do You Think You Are,” however, you feel they are taking a journey beyond that which throws their characters together.

Other notable performances include NSU senior Meredith Noel as Addaperle, Broadway veteran Laiona Michelle as Evilene, and NSU junior Indya Jackson as The Wiz. The statuesque, seasoned Michelle is deliciously evil, sensuality reeking. She is commanding and you love to hate her and hate it when she disappears. Departing senior Noel continues to show extraordinary range. She appears comfortable in any skin and adapts to character like a chameleon.

Mullins and Stockard cast against type by using Indya Jackson in a traditionally male role. I have seen other females portray the great and powerful Oz. It can be a risky enterprise, demanding that the audience dare to greatly suspend belief. Jackson is truly a gifted performer, but she was hampered somewhat by audio challenges that taunted her opening number. It’s certain to improve.

“The Wiz” is generally performed on a stage much larger than the Wells proscenium offering. Yet, the directors have effectively captured the magic that the production demands, packaging it in a sensory feast of color, sight and sound and a huge cast, much too large to mention all here, uniformly dedicated to having you join them on their wonderful journey to Oz. The production continues through April 30.