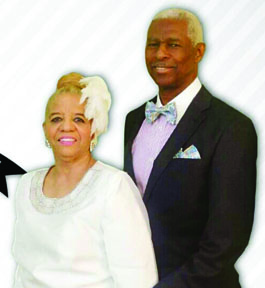 When the Rev. Elbert T. Knight took an inaugural tour at the campus of Mt. Carmel Baptist Church, in Portsmouth, in 1981, he refused to turn a blind eye to the hard, rough realities that existed inside and outside of the church’s doors. Knight, age 73, was 38 at the time. He said sheer endurance pushed him to increase the membership from about two dozen to several hundred and to add an 8 a.m. service during the years he has served the church and community.

This means, he has raised funds, hired staff to work in the edifice and to pave the parking lot and add street lights; because, according to Webster’s Dictionary, the word endure means to last, to continue. Another example of his endurance is the celebrated drug-treatment program he launched about two decades ago with about six people. Now, many officials in the criminal justice system use the program which attracts about 60 people a week, he said.

Of his decision to endure in an initially hard, rough situation for more than three decades, Rev. Knight, is celebrating his 35th anniversary during the month of September.
He and his wife, First Lady Alfreda Knight, will be hosts to three special worship services planned at the church to mark their anniversary. On Sunday, September 11 at 4 p.m., Bishop Curtis Edmonds, St. Mark Missionary Baptist Church, will lead the service, followed on Sunday at 3:30 p.m., by Pastor William Hampton, Mt. Calvary Baptist Church. The services conclude on September 25 at 3 p.m. with Guest Pastor Charles Beamon of Enoch Baptist Church. All are open to the public.

Rev. Knight fondly remembers his early years of scarcity at Mt. Carmel. ”When I came to Mt. Carmel, it did not have a paved parking lot or street lights around the church. Now we have about 100 paved parking spaces and the amenities, as well. We also bought additional property.” Knight came to Mt. Carmel Baptist after pastoring from 1979 to 1981 at Mt. Bethel Baptist Church in Virginia Beach. He reflected on other changes that have occurred during his tenure. “In the course of 35 years, we have purchased four homes and demolished them. We gave one home away. All of this was done to make room for the growth of the church.”

Knight added, “The drug treatment program we started in 1998 with about six people now has as many as 65 each week. The courts all over Tidewater use it. I have appeared in court for those who do not have a voice. As the area courts have become aware of our program, many have released people to our program.” And, yes, it is effective, he said. “We have had several newspaper articles written about our program. We have a better retention rate of people staying off of drugs and out of the court system. Several judges have told me this. Every circuit judge in the area has been to our church. Our church has been visited by many government officials, several mayors, including the mayor of Portsmouth.”

In a sense, inspirational writer T.F. Hodge brings Knight’s 35-year-old legacy of endurance into sharp focus in his 2009 bestseller, From Within I Rise. Hodge writes, “The sky is not my limit … I am.” In a sense, this what the Bible says. It goes so far as to define endurance as a decision, one that inevitably launches favorable outcomes. “Behold, we count them happy which endure,” notes James 5:11. Indeed, we call blessed those who have persevered. Knight listened to both commentaries, smiled and nodded in agreement. “For the 35 years that God has allowed me to be in this church, we have never really experienced in-house fights,” he said. “Here, again I give God the glory because there is no way I could have done that.”

Rev. Knight pointed to other accomplishments, “We have modern technology and screens in the sanctuary. We renovated the physical building, and added an administrative wing which includes a fellowship hall, conference room, administrative offices. We enlarged the sanctuary and choir loft,” (and added or renovated classrooms as well). Knight gives honor to God for the favorable outcomes that are evident inside and outside of the parish’s door. “It is because of the Holy Spirit of God,” he said. “He called me to preach. He is my Master. Therefore, this is what has enabled me to endure for these 35 years.”

So, will he retire? Will he take a well-deserved break? “I’m leaving that up to the Lord,” he said. “I realize that after 35 years I know I will not be able to pastor forever but at this point, I know God has blessed me with decent health, strength and a sound mind. “I am waiting on the Lord to give me the green light on when I will step down. I would like to leave the church in good hands.”