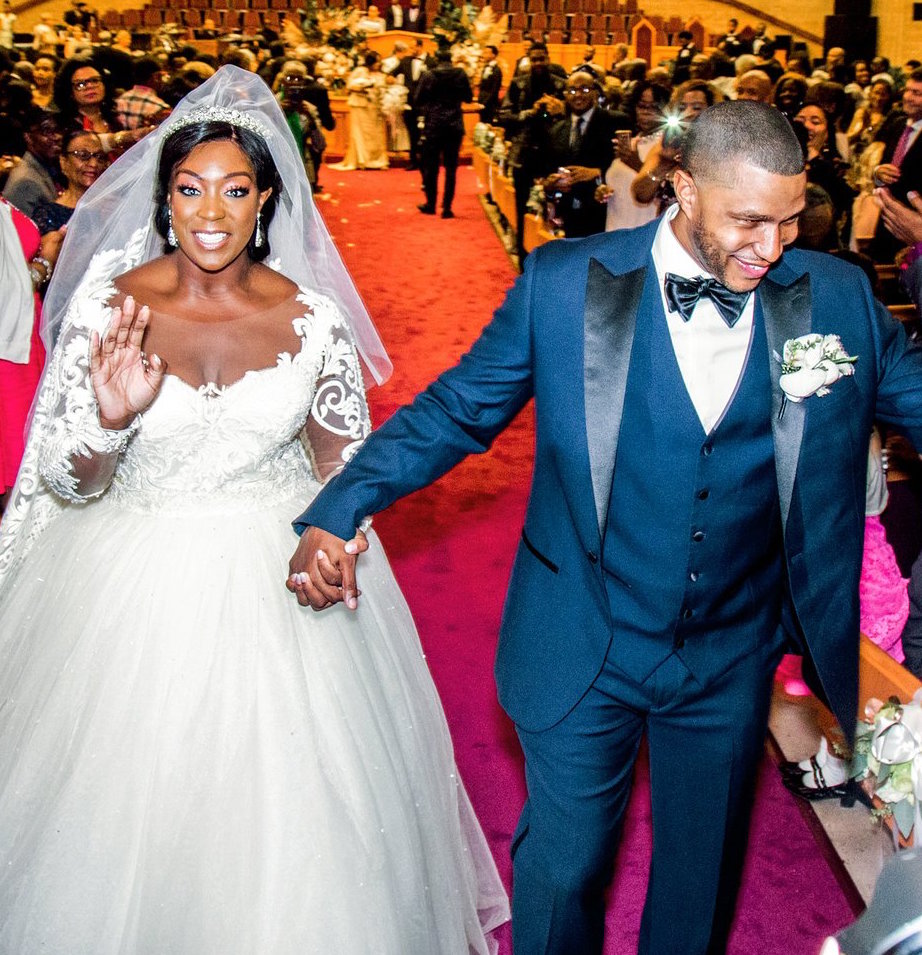 Bright is a 33-year-old academic from Tennessee. He and his bride were joined in matrimony in the nearly thousand-seat church that was filled with family and friends, reporters, television executives and political figures seated on both sides of the aisle. Daisy and rose petals covered the aisle. The bride wore a white, two-piece hand-embroidered lace wedding gown. The groom wore a dark blue tuxedo.

“He’s smart, handsome, faith-based and family-oriented,” the bride said of her new husband, whom she met five years ago outside a Harlem restaurant, according to The New York Times.
“Sometimes I say to my mother, ‘Mom, I have to pinch myself, is this really happening? I really get to marry this guy?’” she said. “He’s a living, breathing testament that God is real, because this is what I prayed for.”

The groom’s parents are Vanessa Bright, a speech therapist, and James Bright, the director of human resources for the University of Tennessee at Martin.

As the bride’s father read a scripture during the ceremony, he said that he too had his prayers answered on his daughter’s wedding day.

“There were times, especially when Dominique was a little girl, when I wondered if I would ever get to walk her down the aisle,” her father said. “I’ve been stabbed, and I’ve been jailed for civil rights causes and had death threats against me, so to be able to be here today, just as a father and nothing else, and to know it’s just about my daughter and not about a cause or a controversy or someone wanting to harm me, well, that means the world to me.”

The ceremony was performed by the Rev. Dr. Margaret Elaine Flake who said, “We are excited that Dominique and Marcus are coming together into this holy state of matrimony. And if anyone has a reason they should not be united, just be quiet.”

Everyone laughed, including her father and his girlfriend Aisha McShaw, who sat to the left of Kathy Elaine Jordan-Sharpton, who is a production coordinator at the Apollo Theater and operates her own catering company. The bride’s parents separated in 2004. Next to the bride’s mother sat the groom’s parents.

The groom is an administrator at Medgar Evers College in Brooklyn and a frequent contributor to HuffPost. He is also the executive director of education for A Better America.
The bride studied at Temple in Philadelphia before completing her education at the American Musical and Dramatic Academy in New York. She is the national director of membership at her father’s National Action Network, which serves more than 100 chapters across the United States. She is also a musical theater actress and has appeared in several local stage productions in the past few years,

The couple met on June 1, 2012, outside Sylvia’s Restaurant in Harlem. Dr. Bright was visiting New York and arrived late to the restaurant, where he was to meet a group of friends, several of whom knew Ms. Sharpton.

By the time he arrived, however, the group was leaving, and a mutual friend introduced him to Ms. Sharpton as she was hailing a taxicab to go home.

They spoke briefly, but long enough for Ms. Sharpton to “want to get to know him better,” as she put it.

The next morning, Ms. Sharpton looked up from her work station and saw him standing there.

Within two months, they were dating steadily.