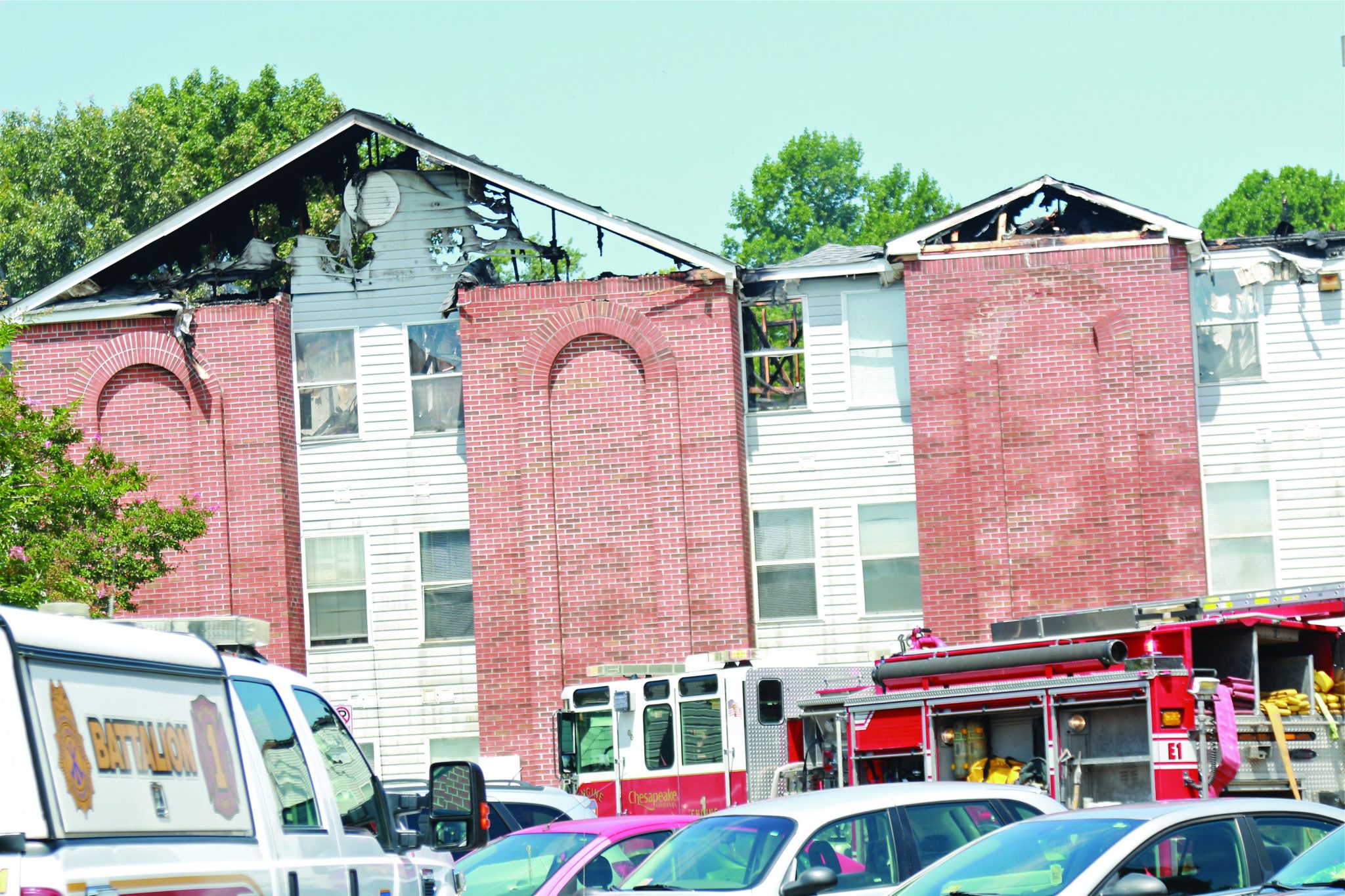 CHESAPEAKE
It is not unusual for Angie Gregory to be awake and watching TV at 4 a.m. She gets home late from work and frequently stays up until the early hours.

On Saturday morning, July 15, as she was watching TV, she was aware of a severe thunderstorm taking place outside her second floor apartment at the Chesapeake Crossing Senior Community Apartments on Robert Hall Blvd. That is not usual this time of year, especially this season which has seen an abundance of storms.

Gregory said suddenly she heard the sound of people running down the third floor hallway above her. That was unusual, causing her to think someone could be breaking into an apartment. At the same time, she heard the shouts from her neighbors, “Fire!” “Get Out!”

Going to her window, she saw bellowing red-orange flames shooting into the air across from her apartment. She quickly put on a t-shirt and jeans, grabbed her purse, and ran toward the stairs to the parking lot where her frantic neighbors were gathering awaiting the arrival of the fire department.

“We were outside several minutes watching the flames growing and engulfing the buildings before the first fire truck arrived,” said Gregory.

“Everyone was asking, where is the fire department?”

Chesapeake Fire Department said they were called to the blazing fire shortly after 4:30 a.m. on Saturday morning and arrived six minutes later.

By the time the fire was brought under control shortly before 7 a.m., the day had dawned and the damage could be seen. Three of the five apartment buildings in the complex had been destroyed, with the most damage on the third floors of the buildings. Apartments on the second floor were less affected by the fire but undoubtedly suffered severe water damage while first floor apartments seemed the least affected.

Also, three of the residents, they later learned, had died in the mayhem and several persons, including a firefighter were taken to the hospital.

Every one of the residents was displaced – more than 150 permanently. The remainder of the residents temporarily until their units can be made habitable, something no one knows when four days after the tragedy.

The cause of the fire has been speculated to be lightening strikes that hit the complex in two places, but that has not been confirmed to date.

As the investigation continues surrounding the cause of the fire and the events of that Saturday morning, it has been learned that the complex did not have a fire alarm.

According to news accounts, a fire department spokesman said the complex was not required to have such an alarm.

The complex is owned by Boyd Homes, and its president is reported to have said the apartments do have a sprinkler system that includes an alarm which he said did go off during the fire.

According to state fire prevention codes, fire alarms are not required unless the building code calls for it. The Chesapeake complex was exempt.

Gregory said the whole experience has been unnerving for her, but like all tragedies, she said it brought those involved closer together. It was the residents who alerted her and her neighbors of the fire, running door to door and yelling “Fire!”

She said she heard no fire alarm going off, and she was awake at the time the fire started.

Gregory said she sat in her car in the parking lot with two other residents for several hours after the four-alarm fire was extinguished. As the morning wore on, a relief table was set up with water, food and coffee.

“But we were unaware of the food,” she said about herself and those in her car. “Someone did bring water around, but around 10 a.m. when I finally asked a Red Cross worker about something to eat, he told me the table was on the other side from where we were parked.”

Residents were evacuated from the scene around 11 a.m. after those with medications inside of their apartments were assisted by firefighters who entered the buildings to retrieve their medications.

Some persons were picked up by family members or friends or transported to a temporary shelter at the Indian River School.

Those taken to the shelter without anywhere else to go were later given hotel rooms, but for how long is not known Angie Gregory considers herself blessed. She was picked up by her best friend and taken to her friend’s Norfolk apartment.

Gregory’s apartment is in one of the two buildings that were untouched by the fire. She will be able to return to her home eventually, once the area is cleared.

For now, she is looking forward to a pre-planned vacation to Florida this week with her best friend. The complex’s management team entered her apartment on her behalf on Monday to pack a suitcase of her clothing and toiletries. Her church family, New Covenant Fellowship Church of Chesapeake, is helping out to encourage her brief respite from the tragedy of the past few days.

Gregory is sorry for the loss of life and property of her neighbors, and grateful for the Good Samaritans who helped to save her life and that of the other neighbors. She is prayerful that when she returns next week, she will be returning to her home at the complex.