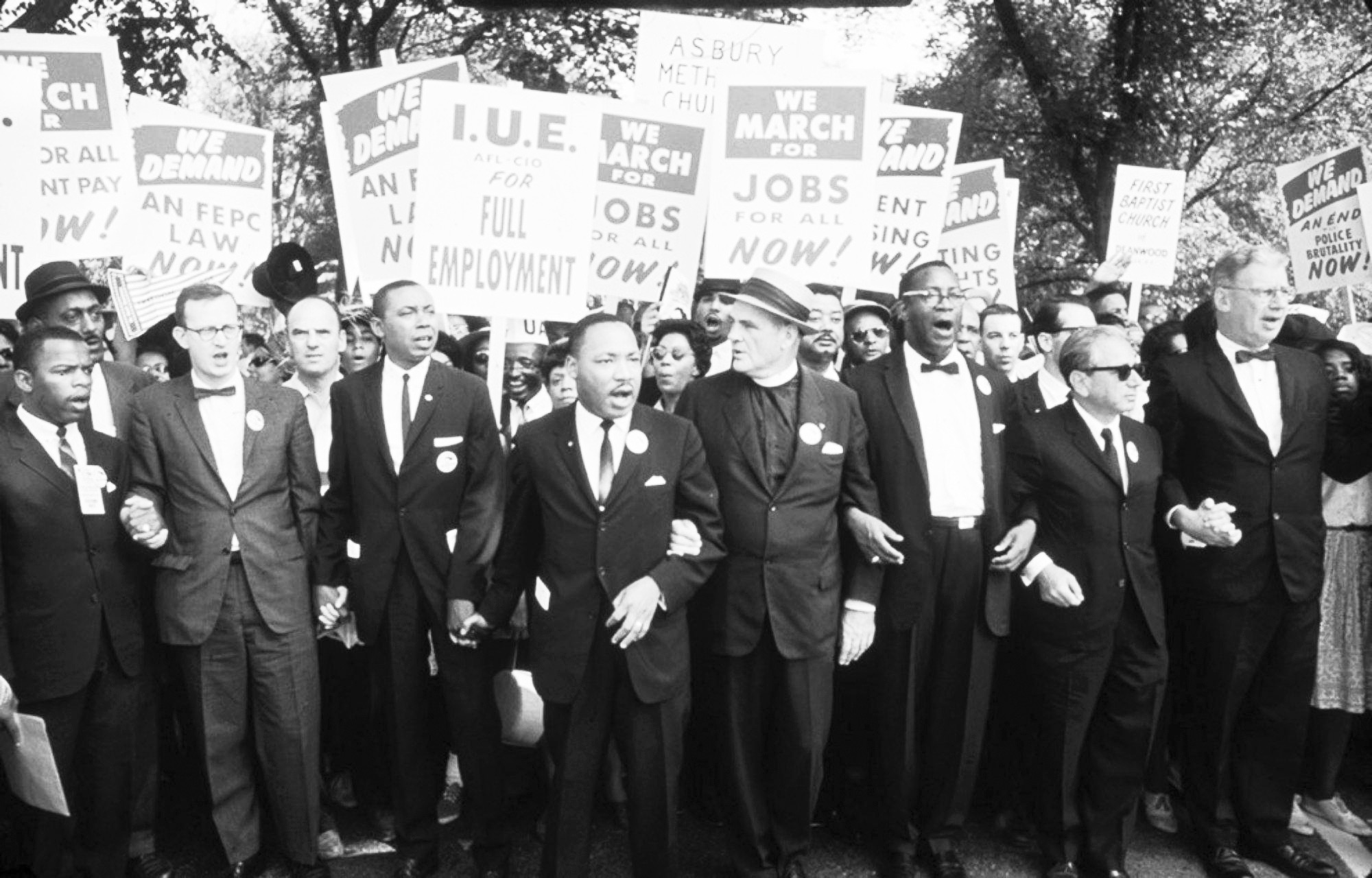 Even as a young man, A. Philip Randolph understood that the economic wellbeing of workers and the political rights of African Americans were inextricably linked. It is one of the reasons why, in the 1920s, he agreed to organize and operate the Brotherhood of Sleeping Car Porters, the first Black-led labor union to receive a charter from the American Federation of Labor.

It was his recognition of this coalescence of Black economic and political interests that led him to threaten the first March on Washington in the 1940s; which was only preempted when President Franklin D. Roosevelt agreed to issue Executive Order 8802, banning discrimination in Civil Service and World War II defense industries. And it was why he named the iconic 1963 march on Washington, which he organized and led, the March on Washington for Jobs and Freedom. The complete title wasn’t an accident. Randolph understood that the economic component was essential in obtaining freedom and equality for Black people.

It was, therefore, clearly logical that in 1968, as the new associate director of the A. Philip Randolph Institute, APRI, I was sent to Tennessee to help the workers, most of them Black, engaged in the Memphis Sanitation Strike. It was a classic nexus of the promise of the civil rights movement and the American labor movement; a logical comingling of race and work in the context of a democratic nation.

At the 1961 AFL-CIO convention, King warned that Black people should be skeptical of anti-union forces, noting that the “labor-hater and race-baiter is virtually always a twin-headed creature spewing anti-Negro epithets from one mouth and anti-labor propaganda from the other.”

On February 11, 1968, a group of 1,300 almost exclusively Black, sanitation workers walked off of their jobs. For years, they had suffered through low pay and horrendously dangerous, racially-tainted working conditions. When two sanitation workers were crushed to death by a malfunctioning garbage truck that month, the workers had enough. They launched boycotts and protests with placards that are preserved in the Smithsonian Institution, declaring that “I Am A Man.”

I was sent to assist the staff of the American Federation of State, County, and Municipal Employees, AFSCME, as it tried to organize these beleaguered sanitation workers. The city’s mayor had refused to speak with the workers, calling their strike illegal. In the meantime, thousands of tons of garbage piled up on the streets of Memphis – despite scab workers who crossed the picket lines.

I was not the only outside help to gather in Memphis in those early months of 1968. Bayard Rustin (Randolph’s right hand and executive director of APRI), Roy Wilkins (the executive secretary of the NAACP) and James Lawson, Jr. (a leading civil rights movement theoretician and tactician) were also there. Each visibly supporting the strikers as the national media swooped in and splashed this struggle all over America’s newspapers; the coverage seemed to crackle over radio and television everywhere.

Then, on March 18th (against the counsel of his inner circle), Dr. King famously arrived in Memphis to offer his support to the strikers. That evening, he addressed an enormous gathering of 25,000 strike supporters. Ten days later, he led a demonstration that went terribly wrong when some protesters turned to violence, smashing store windows, looting and inviting city police to respond with billy clubs and tear gas. A Black 16-year-old, Larry Payne, was shot and killed by police during the melee. City officials estimated that more than 20,000 students skipped school that day.

I was there. That march started at a Black church, the Clayborn Temple at Hernando Street and Pontotoc Avenue. Dr. King was at the head of the march and I was close behind him. As we marched through the Black community, we could see people lining the streets in support. The white people we saw at that time seemed neutral to our cause.

I can’t say I sensed any hostility toward any of us. Then suddenly I smelled the bite of tear gas. I turned quickly and looked back. I could see young Black men throwing stones at the storefronts we were passing. At first, the police seemed to be focused on these violent youth. But in short order, they were spraying tear gas indiscriminately at all of us.

The gas was suffocating. It burned the rims of my eyes and was reaching down my throat. I could taste it and, with it, I could taste defeat. It was a crushing setback. At first, Dr. King was hurried into a car and taken to a nearby hotel. But eventually, he and other march leaders decided to turn the march around and head back to Clayborn Temple. It was the right thing to do. I could see that Dr. King was very upset, distraught and depressed. He seemed so disappointed, saying that he had experienced tear gas before, but never as a result of demonstrators losing their resolve and self-discipline.

Once we returned to the church, Dr. King joined us and practically fell silent. When he did speak it was to urge the protesters to be peaceful and nonviolent. Before long, he told the demonstrators that the march was over and that everyone should leave quickly and in an orderly fashion.

But some of us stayed, mostly members of AFSCME and staffers from Dr. King’s Southern Christian Leadership Conference (SCLC). We urged Dr. King to lead a second march, one in early April. We argued that the strike was part of a larger trade union struggle and that national labor leaders could be recruited to help maintain discipline for the second march.

Dr. King was hesitant; you could see it in his eyes and read it in his manner. He wanted to explore other ways to support the sanitation workers, but eventually he came around. He left Memphis. I, along with the AFSCME and SCLC staff members, including Bill Lucy, Jesse Epps and P.J. Champa, went to the city’s Black ministers to solicit their support for the second march. The ministers embraced the plan right away and pledged to urge their congregations to do the same.

We organized an outreach effort, creating and passing out leaflets supporting the new march wherever we knew Black people gathered, like supermarkets and barbershops. We were also able to enlist the support of the Black members of the Memphis City Council.

On April 3, Dr. King returned to the city. Despite the fact that he was not feeling well, he got out of bed to speak to a gathering at Clayborn Temple. And while history remembers well that this would be his last public speech, the one in which he spoke of reaching “the mountaintop” and being able to see “the Promised Land,” but, like Moses, being fearful that he would not be allowed to reach it. He also spoke directly to the striking sanitation workers: “We’ve got to give ourselves to this struggle until the end,” he said. “Nothing would be more tragic than to stop at this point in Memphis. We’ve got to see it through.”

It was a magnificent moment. It was the old Dr. King again. I had worked with him before, going back, of course, to helping Randolph and Rustin organize the March on Washington in 1963, and Velma and I meeting with him and other civil rights leaders trying to help Dr. King decide whether to take on segregation in the Midwest in the summer of 1965. And there was his six-city, get-out-the-vote tour in 1964 that I helped to coordinate for him through the Midwest and Northeast when I worked for the AFL-CIO Industrial Union Department.

So, I was in Memphis on April 4th, about to attend an early evening meeting of strike supporters when I got word that Dr. King had been shot. Like millions around the world who would learn of this searing tragedy, I was stunned. I rushed by car to the Lorraine Motel where I knew he and his aides were staying.

All I found were police, sobbing activists and onlookers, and steps where Dr. King’s blood trailed from the balcony where the nation’s prophet of peace had been slain. I saw that balcony where Dr. King fell, it was still stained with his blood that had pooled and ran off of the side like a crimson rain.

I had to talk to my wife Velma. I found a phone and called her. There was no one else in this world I could truly turn to, to help me make sense of this staggering act of horrific violence, of sickening hatred – not simply for one man, but for an entire race. My race.

In less than two weeks the strike was over. The second march, with Bayard Rustin playing a role in its coordination, did take place on April 8. In the wake of Dr. King’s assassination, the march played a dual role, becoming a memorial to the monumental man as well as a show of continued support for the striking sanitation workers.

Some 40,000 people participated, including Dr. King’s brave widow, Coretta Scott King. There were no incidents.

While Memphis Mayor Henry Loeb continued to oppose the unionization of the sanitation workers, in the end, his opposition was overridden by the city council that felt the pressure from mounting constituent complaints about tons of garbage reeking in their streets.

Yet, on the 50th anniversary of the Memphis sanitation workers strike, organized labor faces new and powerful challenges. For example, the case of Janus v. AFSCME, which the U.S. Supreme Court is taking up, raises whether unions have the fundamental right to expect public workers they represent to pay union dues. The matter is likely to be decided this year. The implications of a decision, for obvious reasons, could be profound regarding public sector unions like, for instance, the Service Employees International Union and the American Federation of Teachers, affecting millions of workers.

In response to a White House and far right that appears determined to not only turn back the clock – but break it – regarding organized labor in America, arises a new necessity. We must, following the example of Randolph and Dr. King, harness an emerging coalition of progressive forces that today must include not only traditional civil rights and labor groups, but also Black Lives Matter, and the #MeToo and related women’s movements.

At the same time, demonstrations of this collective power must be felt at the ballot box nationwide, especially as midterm elections draw near.

Norman Hill is President Emeritus of the A. Philip Randolph Institute.

This post is excerpted from a forthcoming memoir, Climbing the Rough Side of the Mountain, by civil rights and labor activists Norman Hill and Velma Murphy Hill.