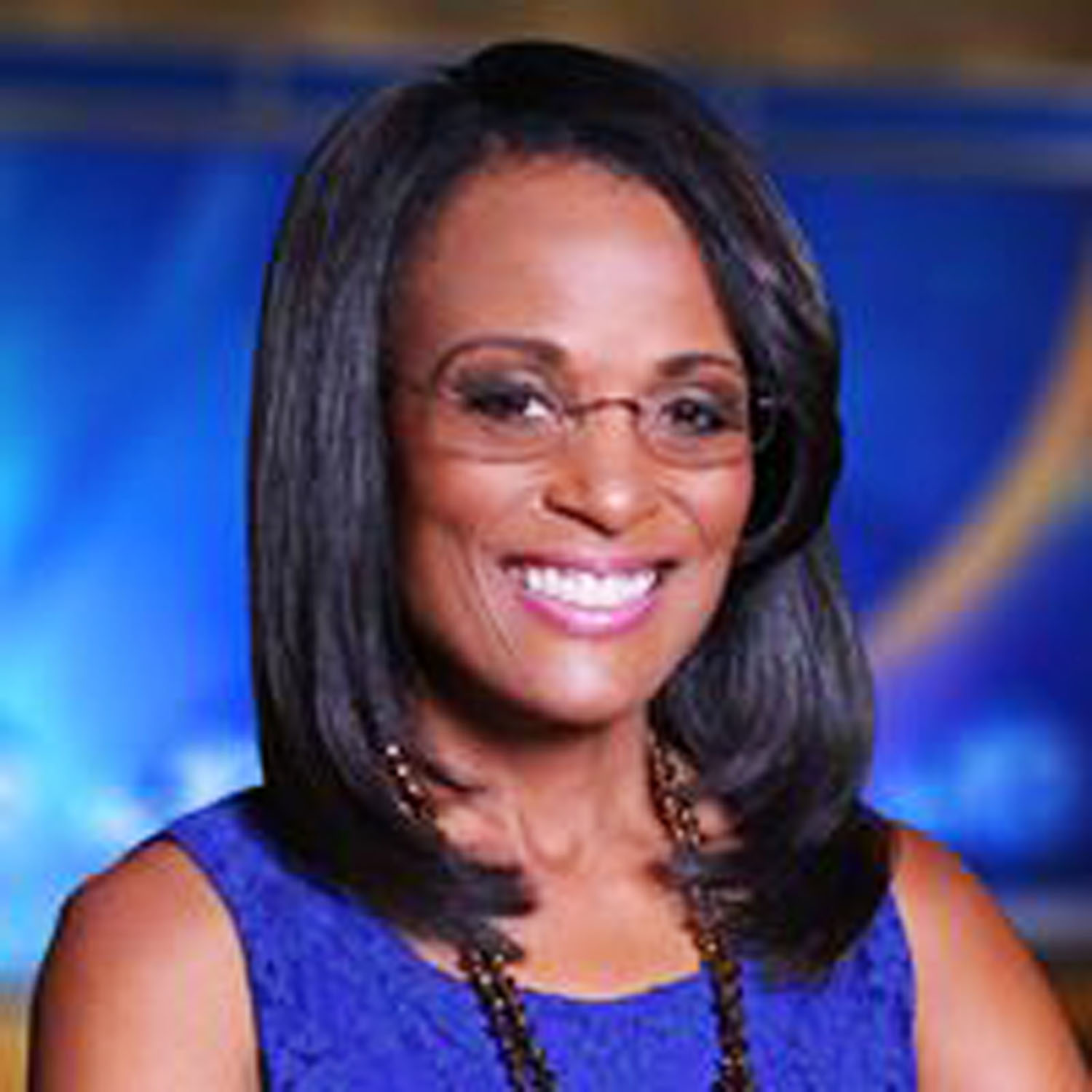 Regina Mobley is proudly celebrating her 25th year as the Primary News Anchor for ABC-13 WVEC-TV, and 32 years in broadcasting in Hampton Roads.

A native of Norfolk, Mobley graduated from Granby High School in 1979 and went on to complete her Bachelor’s Degree in Mass Communications from Norfolk State University in 1983.

She started her career in broadcast journalism as an anchor and general assignment reporter with four local radio stations, and in 1985, transitioned to television as a reporter for the local CBS affiliate, WTKR-TV.

On the military beat, she was on the team of reporters who covered the 1989 turret explosion on the USS Iowa that killed 47 Navy personnel and received international coverage. In 1991, she transited the Suez Canal onboard the aircraft carrier USS John F. Kennedy as it returned from Operation Desert Storm.

From the Mediterranean Sea, she met with Navy personnel from various ships in the Kennedy Battle Group who were instrumental in liberating Kuwait from Iraq In 1996. Mobley spent more than three weeks in Bosnia and the Adriatic Sea region covering U.S. troops who established zones of separation among warring factions in Bosnia.

Since joining the WVEC staff in late 1992, Mobley has been in the spotlight regularly as a news anchor and reporter. She has developed a strong following in the Hampton Roads community with a reputation for aggressive coverage of crime and other high-profile stories.

One of the highlights of her three-decade long career was her March 2011 interview with President Barack Obama, the first ever of a sitting President by a local news reporter.

An avid golfer, she is a long-standing member of the Board of Managers for the First Tee of Hampton Roads, a junior golf program that teaches children the game of golf and provides mentoring in essential life skills for youth. She sits on the Board of Directors of the American Red Cross, Mid-Atlantic Blood Services Region.

A resident of Virginia Beach and proud mother of two adult daughters, in 2011, she married Clyde A. Taylor, a technical producer to major television organizations that cover sports.

Mobley made golf headlines in 2000 when she shot two holes-in-one within a 24-hour period, won a new car, and achieved official Golf Digest acclaim. According to Golf Digest, the odds of that happening to a rookie golfer are 300 million to one. In addition to enjoying golf, she also enjoys running, cycling, and swimming.

NJG: What inspired you to get into media, especially broadcasting?
RM: As a senior or junior in high school, I remember turning to World News Tonight with Frank Reynolds, Peter Jennings, and Max Robinson. The broadcast which took you from Washington, overseas, and then back stateside to Chicago was cutting edge journalism that showcased the efficiency of electronic newsgathering. I was hooked and formed a linear approach to entering the television news industry.

NJG: Did you have a role model?
RM: I had a great deal of respect for the work of the late Peter Jennings, and the late Ed Bradley. As a native of Hampton Roads, I admired and learned valuable skills from the late Ed Hughes and Bruce Barry, both of WTKR. I also have a great deal of respect for former WAVY reporter Ava Hurdle and WTAR-TV anchor Becky Livas.
I am proud to say that many years later I had the pleasure of working with WTKR intern Nicole Livas. She was a natural who could nail her stand ups with one take. It was no surprise when she grew to become a sought after reporter and anchor in several markets.

NJG: When you entered the field, what kind of presence did Blacks have in it?
RM: Beginning around 1981, I worked at WNIS -AM, as a news reader. About a year a later, I was hired as a DJ at WNOR-AM. Within a year I joined the news department as a morning show news reader, and around 1983, I was hired at WTAR as a news reader and reporter.
I worked in radio just as the urban radio scene was beginning to dominate the airwaves. There were opportunities for minorities on-air, in sales, marketing, and management.

NJG: How did you transition from radio to TV?
RM: I was approached by former WTAR news director Lou Paris, who suggested I produce a television audition tape. I produced a story at the corner of Brambleton Avenue and Church Street regarding plans to build the MLK memorial. With that single story, I was hired as a reporter for WTKR-TV.

NJG: How has that diversity changed in the field since those early days?
RM: I am proud to say that since the mid-1980’s, Hampton Roads has had an appropriate number of minorities who have worked in high profile positions as on-air talent. I have seen progress in the number of minority men and women who have been employed to assist in the management of content and resources.

NJG: What do you attribute to your longevity?
RM: It’s important to handle with care the people, places, and things that end up in the headlines. So many viewers have allowed me into their hearts and homes during periods of tragedy. I am grateful that they have trusted me to offer a fair and accurate account of their situation.
I also spend a lot of time and effort on maintaining good spiritual and physical health. I’m praying God will help me to complete a third half-marathon during the next year.

NJG: What kinds of stories do you enjoy the most?
RM: Ahhh, great question. I am very proud of my stories that are good examples of my relationships with the people of the community. Back in 1992, when I joined the staff of WVEC, I covered a story about a Norfolk police officer whose wife had just given birth to triplets. Eighteen years later, I returned to their home to cover high school graduation for the Mitchell triplets. I keep in touch with the boys via Facebook.

I’m also very proud of the stories I did over the years that featured children who were part of the Centerstage children’s performing arts organization, founded by the late Margie Day Walker. Many of those talented people are now veterans in the entertainment industry.

I am also proud of the obituary stories I have produced on leaders in the region, including my story on the late mayor of Virginia Beach, Meyera Oberndorf, and former WVEC news anchor Jim Kincaid. I was with the mayor the night she was elected mayor in the mid-80’s, and I did the last television interview with Jim Kincaid. He died one month after my interview with him at his home in Farmville, Virginia.

NJG: You have written a lot about the connections between father and sons, and other issues. What is your inspiration for doing it?
RM: One story that I will never forget is the story I produced around 1990 on a new fatherhood program developed by veteran social worker Brian Hawkins. The young man I interviewed for the story was about 18-years-old and was an outstanding athlete. He was very polite, articulate, and handsome.

About a year later, there was a report of a homicide in a public housing community in Norfolk. A day or so later, I learned the murder victim was the young father I had interviewed. I was told he had lost his eligibility to play high school sports, and he turned to selling drugs. The streets claimed him one month later.

NJG: What inspiration and enjoyment do you get from being civically active?
RM: I’m very proud of a program I launched at The First Tee called Gridiron to Greens. It was a one-day crash course in golf for the entire Granby High School Football team. Many of the Granby football players had never swung a golf club.

I also serve on the Board of the American Red Cross. My daughter, Renee, is a cancer survivor, and her treatment called for several whole blood transfusions. It’s critical for the entire community to take ownership of the safe blood supply issue. What happened to Renee could happen to you. I am proud to say Renee has been cancer-free for more than 28 years. Thank God!

NJG: You are constantly on the move. How do you relax? What kind of person is Regina Mobley around the house when you re away from work?
RM: When I stop moving, that means I have the flu or something like that.

My husband Clyde says any day now, I’m going to hit the wall.

NJG: What is the most important responsibility of a journalist in serving the people who watch, read and listen to them for information?
RM: As news people are under attack from politicians and others who call the news “fake,” it’s important that we handle people, places and things with care and honesty. If we make a mistake, own up to it and correct the mistake without hesitation. To quote my former news director Dave Cassidy, “I’d rather be right than first,” when covering a story.