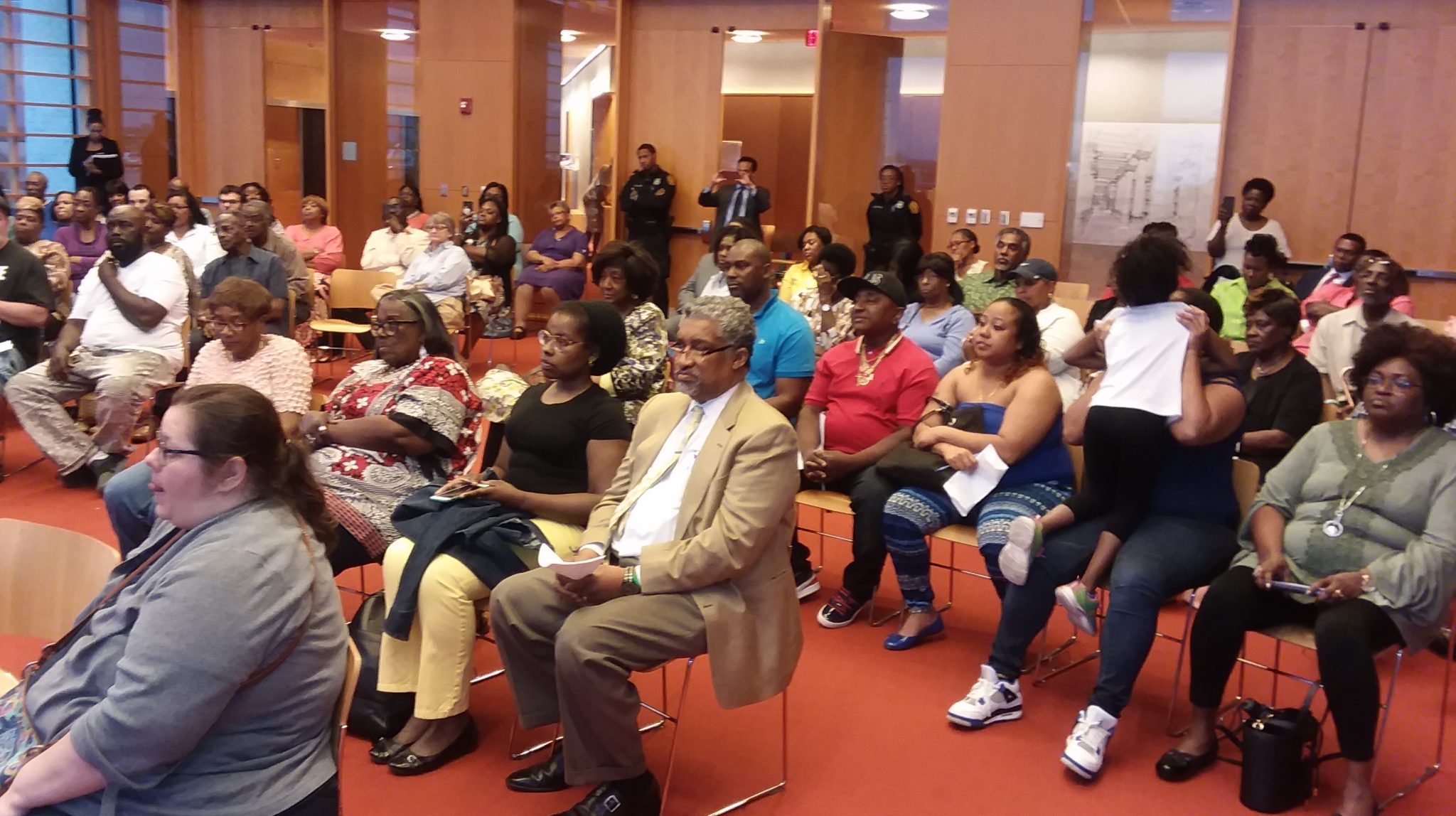 Area residents voiced overwhelming opposition to a proposed recycling and trash collecting facility in a Norfolk neighborhood during a town hall meeting on May 22 on the sixth floor of the Slover Library. Those attending included residents living near the site, those who did not, housing activists, and city leaders.

The public hearing which lasted one hour and 13 minutes was hosted by Select Recycling Waste Services, Inc. (SRWS), and was attended by more than 100 persons. Each of those speaking denounced SRWS’s plan to open the facility in the Bruce Park/Barraud Park section of Norfolk.

The company is proposing to collect refuse from construction sites around the region, truck it to the old Globe Iron complex site at 1525 St. Julian’s Avenue and extract recyclable material to be sold.

The meeting was one of two public hearings SRWS was required to schedule to comply with Department of Environmental Quality (DEQ) requirements to secure a permit to proceed.

According to city officials only 10 percent of the material that will be at the site will be recyclable. Other materials will be stored and then hauled away on trucks to a land fill.

The facility is already zoned to allow the company to recycle. But it is not zoned to store the garbage which the city and residents living near it fear may include hazardous waste such as asbestos or worse.

The city has denied SRWS’s permit request to store garbage, and the recycling company is seeking to secure an “exception” or “variance” from DEQ to override the city’s zoning code.

The company has said the site was used already for heavy industry, and it would construct safeguards to assure the site from being hazardous to the nearby residents.

The city has asked the DEQ to deny the variance. And according to Norfolk City Council which has expressed its opposition, the city has launched legal efforts to appeal any favorable decision by that agency.

June 5 is the final day that residents can voice opposition or support to the DEQ for the venture in writing via traditional mail or E-Mail.

The time and date set by SRWS for the May 22 public hearing coincided with a regularly scheduled city council meeting. A week before the public hearing was held, city council persons Mamie Johnson (Ward 3) and Angelia Williams Graves (Superward 7), were alerted the hearing had been set for May 22 at 7 p.m.

It was set during the same time the council was taking a crucial final vote on the city budget. The council starts public business at 6 p.m.

But the two convinced Mayor Kenneth Alexander and other council members to move the vote on the budget to earlier in the panel’s agenda to ensure city leaders would be in attendance.

Also, with the help of their allies, Johnson and Graves launched a conventional and social media alert urging people to attend the May 22 meeting. A story appeared in the May 7 edition of the GUIDE.

The vote was taken by council and the Mayor, Johnson, Williams-Graves and the City Attorney arrived shortly after the public hearing began.

Several of the speakers pointedly noted during their address to the company they had been alerted via the media campaign.

Before the meeting started, another questionable mishap occurred.

When the GUIDE arrived, a number of people seeking to attend the meeting stood outside of Room 115, a small room which may seat 20 people.

Two company representatives and a stenographer seemed taken aback by individuals, such as the School Board Chair Rodney Jordan and Barraud Park resident Marcus Powell, who pointedly ask them why the meeting was being held in such a small space.

The reps ignored them and continued to request they and other attendees sign a sheet to be able to speak.

But Charles Johnson, a member of the library board, had convinced an employee of the Slover to open up the large sixth floor event room.

He then entered the small room and alerted those who had arrived to move to the event room.

Several of the attendees noted that the company either did not anticipate the larger crowd or wanted to limit the number of people who would participate by selecting the smaller venue.

On time, at 7 p.m., the meeting was called to order by a company representative Sharon Cordell Ivory.

She said the hearing was required by a state code and due to the technical nature of the issue and number of individuals who planned to speak that all comments would be recorded. SRWS would respond them in writing and the comments would be available for public scrutiny at the library.

Many of the speakers noted that it was a case of environmental racism, since most of the nearby residents are African American.

Several speakers pointed out that there were no city or state officials in the room during the early part of the event.

Both council members spoke near the end of the event, but Graves addressed the queries about her initial absence and that of her colleagues.

“I am sure there were a lot of questions before we got here,” Graves said, as she opened her remarks. “We had to vote on the budget. It’s no coincidence that this meeting was scheduled on city council night between 7 and 8 p.m. But we will give them (SRWS) the benefit of the doubt.

“We have raised our objections formally, through our city attorney’s office publicly and those objects have not changed,” she said and acknowledged the Mayor and Johnson were indeed present.

Graves said the council “is unified” on its opposition to the plan and had engaged Delegates Joe Lindsey and Jerrauld Jones, whose districts “sit right in the middle ” of the targeted community to lend support for opposing it.

“This is not over,” said Graves. “Bruce and Barraud Parks….have come too far for someone to and turn our neighborhoods into a trash dump.”

Graves referred to Dr. Linda Horsey, a Clinical Psychologist who lives in Huntersville, who said the expected waste, including the “sludge” and other solid wastes, according to EPA definitions, would be far more toxic than the company described in its application.

Graves said she had told Meeks at the first meeting directly that “this was not going to happen” without a fight.

“We are standing for you and with you and doing everything in our power, including legal action to prevent the trash dump from coming into Barraud Park.”

Councilwoman Johnson said before SRWS bought the old Globe Iron building and other nearby properties, Norfolk had designs on buying it as part of the city’s Master Plan. But the city was out maneuvered by the current owners.

She urged people attending the May 22 meeting to continue to be vigilant in the coming weeks. Like Graves, she said the city was in litigation with the company and needed support from people in the impacted communities.

Graves told the audience to send their comments to SRWS

Admin@srwscorp.com She said that just in case your comments “do not

make it” CC and send an email to Donald.Brunson@DEQ.va.gov. 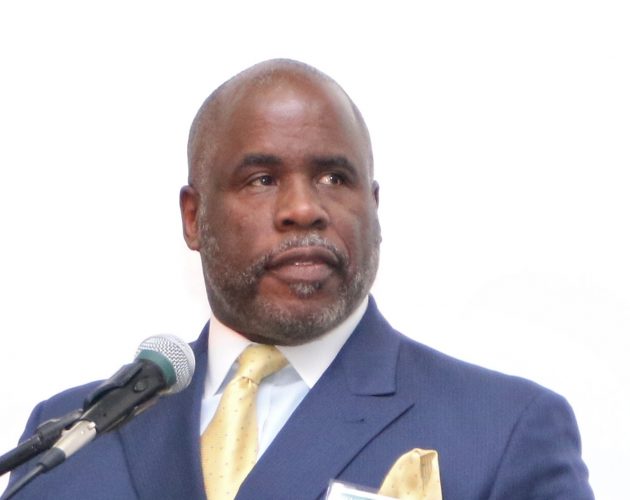