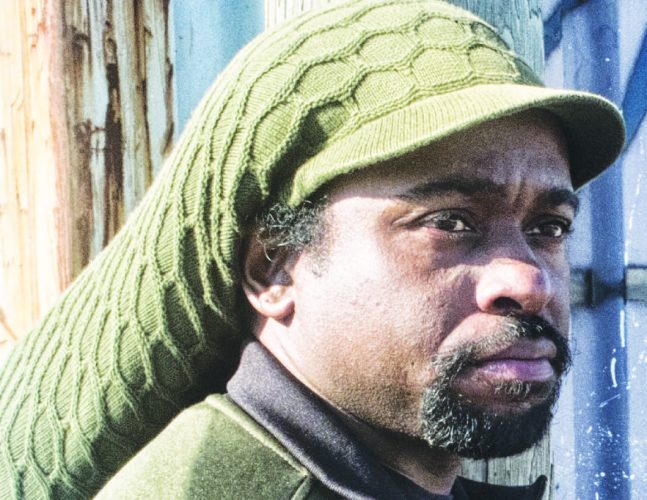 The resurgence of White Supremacy and efforts to turn back the progress crafted by the Obama administration have fostered a wave of protests from progressive voices.

Hampton Roads houses a wide variety of such artists and activists who are following the trend.

One of the most visible of those artists using “protest art” to bring attention to the nation’s “isms” is poet, educator, writer, and recording artist, Synnika Lofton.

Lofton and Randolph Harmon, aka Babatunde, are the duo Black Lion Insurgents, the offspring of Lofton’s Guerilla Ignition Company he founded. The hip-hop duo has produced and performed tracks at various venues in the region from the “Make War In the Temple,” album including the most popular, “All I Know” and “Turn It Up.”

The company also has produced the 38-year-old Lofton’s 145th release, “Chant for Charlottesville,” a single, which is a mix of protest poetry/spoken word and Hip-Hop.
The target of this spoken word poem stems from last summer’s White Supremacist invasion of Charlottesville, Va., where protests erupted because of a proposal to remove a Confederate statue from a park in that city.

The Neo-Nazis and Klan members were challenged by counter protestors and one of them, Heather Heyer, died after being run down by a car driven by one of the racists.
In “Chant for Charlottesville,” Lofton penned lyrics dedicated to Heyer.

“She gave her breath/to break stone/ to crack patriarchy/ to spark revolution/ to uproot racism/ to liberate justice/ from an American tomb.”

Lofton said he believes “people have a responsibility to agitate and disrupt, when injustice becomes a part of any society.”

Recently, he crafted “Kill the Machine” which is a single from an album called “The DNA Collection,” slated to be released this summer.

“In ‘Kill the Machine,” Lofton said, “I love the repeated lines ‘I resist/ I‘m a child of the soil.’”

“I really enjoyed composing the lines because the proper response to institutionalized racism is to simply challenge it and fight back. It can never be allowed to exist in a place that supposedly practices freedom, justice, and equality.”

Lofton said his inspiration is challenged from many directions; one of them is the late Gilbert “Gil” Scott-Heron, an early soul and jazz poet, spoken word artist musician, and author, whose works emerged in the 70s and 80s.

“The Revolution Will Not Be Televised,” is a 1970 poem and song by Scott-Heron in which he recited the lyrics, accompanied by congas and bongo drums.

Lofton said music is one of the strongest mediums of protest art. Hip Hop is one of the most widely promoted genres on the airwaves and other media. But socially conscious content is not profitable enough for commercial radio to play it regularly, he says.

He said a slither of it, such as the kind he and other socially conscious artists produce, is exposed on an independent level and can be found through various online platforms, such as Bandcamp, SoundCloud, the official websites of artists, Podcasts or You Tube.

Other socially conscious artists such as Dead Prez and Immortal Technique have used their clout in Hip Hop to produce protest tracks, especially when addressing incidents of police killings of unarmed Black and Brown men, such as Michael Brown in Ferguson, Missouri, the strangulation of Eric Garner in New York, or the shooting of Philando Castile in Minnesota.

Such heavyweights have used music, their voices, and contributed financially to support the movement against such police violence, led by Black Lives Matters and other activist groups.

Lofton said the protest art form may be described as a sub-genre or “trap music.” Typical lyrical themes include observations of hardship in the «trap,” street life, poverty, violence and harsh experiences that artists have faced in their urban city surroundings.
“With Trump, it’s overwhelming,” said Lofton, who was born in Mantee, Mississippi, in a military family. He spent a portion of his upbringing in California, before his path of life led him to the East Coast for college at Goddard College in Vermont, and then eventually to Hampton Roads.

“The federal suit against Trump’s realty company for discriminating against Black tenants; the Central Park 5, where he attacked five young Black men, wrongfully accused of raping a white woman in 1989; questioning Obama’s birth record; I knew about Trump before he got in the White House,” said Lofton. “His racism is evident and overwhelming and protest artists have been there to document every issue.”

Lofton has been a Literature/Creative Writing instructor at several high schools and is an adjunct English Composition professor at NSU, where he‘s been a featured performer at the William Carroll Writers Festival, a festival named in the honor of the late poet and educator Dr. Bill Carroll.

Lofton said that he wants to lend his skills to help mold the next generation of writers of poetry and prose for a variety of genres, especially those who want to engage, disrupt, and stir the consciousness.

“I find that young writers are very curious and forward thinking and want to work,” said Lofton. “I want them to read about intense subjects like slavery, oppression, imperialism, and what it means to be an individual voice in the world.”