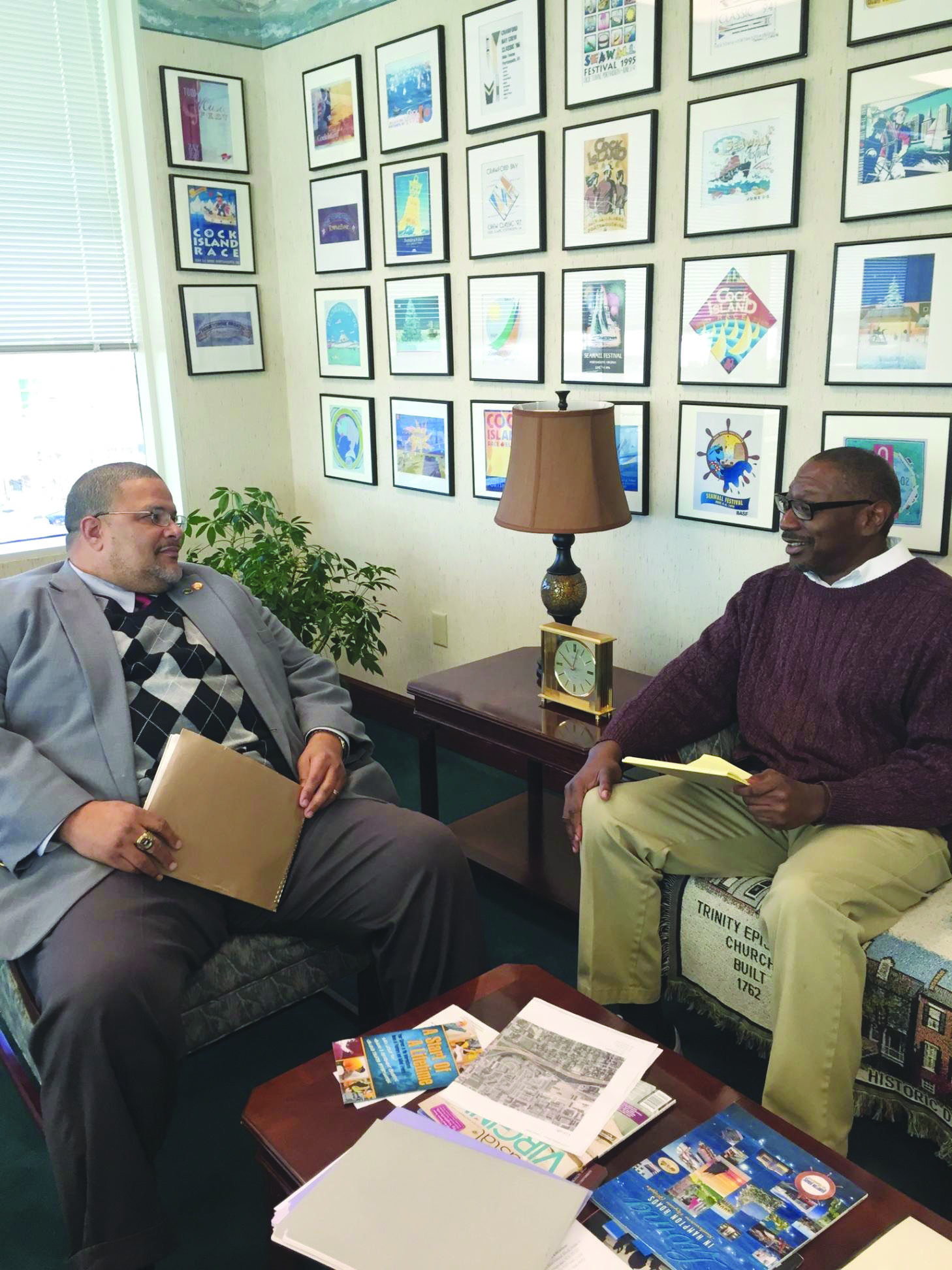 The infighting, criticism and attacks on the Portsmouth City Council are all indicative of tensions the city of Portsmouth is experiencing, due to the city’s transition from a majority White population to a majority Black population.

This was the assessment of Portsmouth Mayor Kenneth Wright during a rare and exclusive New Journal and Guide interview on January 29 in his office.
Wright said his view reflects the beliefs of his allies on council and supporters, who believe efforts by the Black majority on city council to bolster city finances, foster economic development, support education, and to recruit more jobs to the city are being resisted and attacked by a shrinking cadre of White business elite who do not welcome the reforms the Black council majority has promoted.

Wright has been the city’s Mayor for five years, and is about to seek a third term. In explaining the reason for the current wave of political drama, he said, “As the late Mayor (James) Holley always said, ‘let’s put things into its proper perspective.’”
“Portsmouth is 263-years-old and had a White majority for 243 years. For the last 20 years, we have transitioned from a majority White political majority to a majority Black one,” said Wright. “In that 20-year period, 13, 511 White people have left Portsmouth. Our current makeup is 54 percent Black and 42 percent White.”

He continued, “We also have a new generation of public servants who are more concerned with the needs of the people and the economics of the city; although the economics is still controlled by that 1 percent Bernie Sanders is talking about (on the campaign trail).
“That elite group controls most of the city’s economics, but it is losing power because the new city council is asking why are we giving contracts to the same developers, the same law firms, and the same architects.

”Once you get to that period, you’ve got a fight on your hands,” he said. “The good old boys will not relinquish control. They are behind a lot of negatives being directed toward the council.”
Portsmouth demographic and political changes, and the economic pains created by loss of tax revenue and the recent economic downturns have had their impact on the city.

The city, the mayor said, has been seeking to reverse these trends by recruiting businesses and families willing to buy homes to support its tax base and strengthen the city economically.
Franklin and Richmond experience the same shifts in demographic and economic fortunes. Norfolk, which is moving toward minority-majority status, with Blacks securing broader controls of the political and governmental levers of power, may experience the same tensions. But Wright says he “hopes Norfolk and other communities experiencing this transition” will avoid them.

Wright entered office in 2010 and during most of his tenure, there has been steady political and personal drama between members of council and other city leaders, to include the Sheriff and former city managers. The city now has a Black (female) city manager.
Tensions between the Mayor and Sheriff Bill Watson have come into sharp public focus recently.

Wright attributes the cause to the council’s proposal to extract some $1 million from Watson’s budget, and there is talk of tearing down the jail.
Wright and city council colleague Dr. Mark Whitaker, one of the newest and more outspoken members of the governing panel, have backed the removal of the Confederate monument that is located at the corner of High and Court Streets.

Also, the council has been answering questions, criticisms, and inquiries about the current city auditor’s inability to conduct periodic surveys of the city agencies. Wright has managed to retain council support, despite calls for his resignation.
He said considerable tensions have risen over council’s effort to cancel leases on buildings that house city agencies and are owned by what Wright calls “friends and cronies “ of past city officials and the “good ole boy network who’ve gotten rich on these arrangements.”

“Why should we lease space in buildings when we have city-owned facilities we can use free,” asked Wright. “We were paying about $1 million or more on those places. We have cut that in half and will do more to stop lining the pockets of people who are taking advantage of the city. This is taxpayer’s money we could invest in education, helping to fix our infrastructure and community centers.”

The most embarrassing tensions between Wright and the city’s Sheriff arose after the January 11 council meeting. A video shows that Sheriff Watson spotted an expired city sticker on the Mayor’s car. Instead of issuing a warning or a citation at that point, the Sheriff waited until Wright got into his car and drove out of the city garage where his car was parked.

A low speed chase ensued as the Sheriff followed the Mayor’s car until he stopped when the Portsmouth Police arrived.
The Mayor has been charged with eluding the Police.
Wright refused to discuss the issue because it is still before the courts.
Wright said when he took office, the city’s finances were in a meltdown due to the shrinking tax base, and bad decisions of previous city councils. Now as a result of cost cutting and directly engaging the Credit Rating Agencies with examples of how the city will reverse these trends, Portsmouth has received a strong AA rating.

When he arrived in office, the city’s pensions system was near collapse, he said, but the city was able to secure Pension Obligation Bonds at a low interest rate (because of the AA Rating) and improve the health of the plans.
Wright said that investments of city and private capital have been injected into the Midtown Business District (Mid City),Victory Village (Tower Mall), and neighborhoods, along with the construction of a new $78 million courthouse complex, because of asbestos and other flaws in the old one.
The old jail on the waterfront will be redeveloped for housing and commercial use.

Wright pointed out of his office window to the various million dollar apartment developments that are being built downtown. None of them are being constructed by “friends of the good old boys, but people outside the city,” he said.
Wright said that like Norfolk, Portsmouth is seeking to revitalize its downtown waterfront area to attract young professionals (Millennials) to work, play and raise their families there.

The city has conducted a “Disparity Study” to determine the level of women and minority participation in its procurement system in competing for contracts to supply goods and services to the city.
Portsmouth and Hampton are the only two cities to do so at the behest of the 200 Plus Men of Hampton Roads. The study has show a gap in that area which the city hopes to invoke policies to close, said Wright.

Wright said that members of the economic elite can no longer “call and get insider information on contracts, finances and compromise city council members to vote to give them special privileges.”
“We are living in a city where 36 percent of its children live in poverty and 19 percent of the total populations is living in poverty,’ said Wright.
“Why not invest some of that city money in helping all boats rise not just the ones of the elite?”

Wright said that the city recently purchased the old Fredrick Military Academy and is in the process of converting it into a major sportsplex/recreation center to be used by the community for after school programs and recreational activities. But the move has been met with criticism from the Tea Party.

He said the city, churches and communities must work together to improve the educational and employment opportunities for the large number of poor and underserved Black men between the ages of 16 and 24, who are impoverished and vulnerable to being involved with crime and other negative outcomes.

All of this positive news is taking place against a backdrop of an effort to recall Mayor Wright by what his supporters call members of the frustrated White business elite. Thus far, the campaign has not gathered steam.
Also an election is taking place in Portsmouth and Mayor Wright and three council members (Elizabeth M. Psimas, Rev. (Dr.) Curtis E. Edmonds, and Danny Meeks), will be seeking reelection.

Will the Mayor and other council members face a hostile electorate seeking to oust these incumbents?
Wright said that despite the positive moves the council has made, the mainstream print and broadcast media will only report on the mudslinging and political drama because “it’s stuck in tabloid mode.”
“When we try to get the message out they come in with preconceived ideas based on negative information leaked to them by members of council,” said Wright.

Wright said while constituents would like to see friendlier relations between the majority and minority members of council, he said he enjoys the debate, but “wishes it could be more civil.”
But Wright has been bypassing the media, choosing to use friendly traditional media outlets or social media to promote and report on positive effort by Council.

He is often seen at various social and civic functions, and enjoys taking pictures with citizens, especially the youth.
Each Sunday he attends at least four church services, not to recruit voters and tout the council’s record, but to “listen to the voters about their concerns and bring them back to the council to discuss, or for action by the city manager.”

“These tensions have been going on for 20 years,” said Wright. “The reason I’m here is because the previous mayor was recalled! We’ve been working on a ‘New Beginning for This Historic City’ since I’ve taken office. We now have a super majority of Portsmouth voters who are supportive of our policies on moving this city FORWARD,” said Wright.
“We have support from a super majority of our Black and White citizens, and are looking forward to the next chapter.”