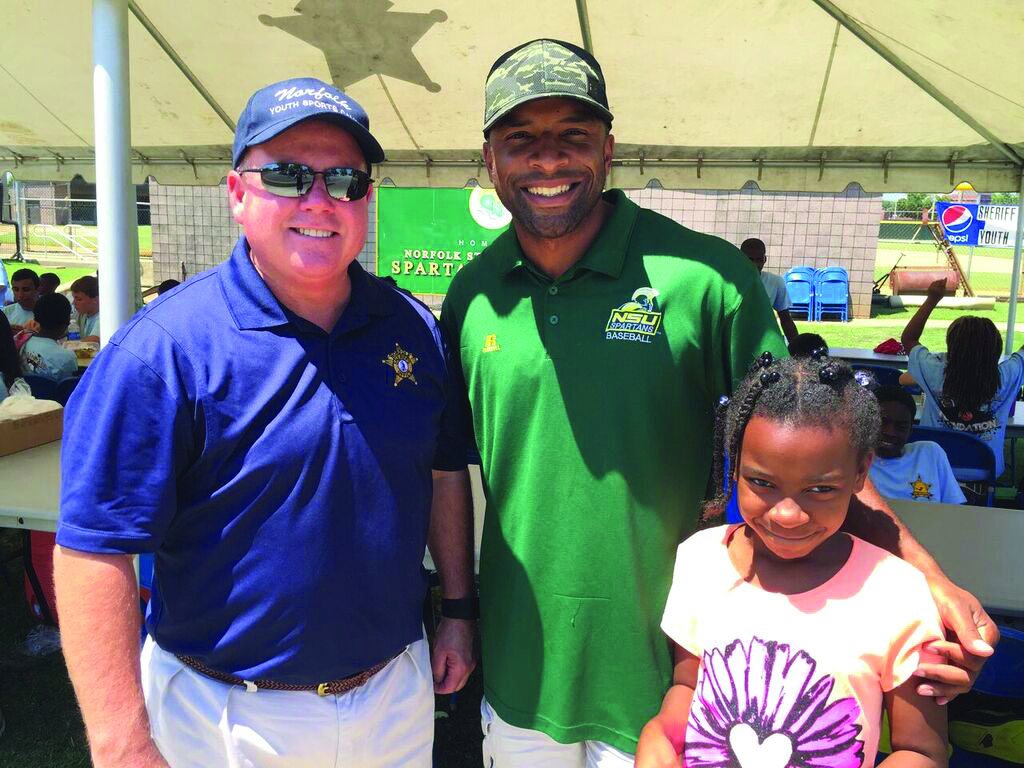 By Karen Hopkins
Special to the New Journal and Guide

Sheriff Bob McCabe was leaving his foundation’s free summer camp, when a parent ran up to thank him for giving his children an opportunity they otherwise couldn’t afford.
“Those are the moments I cherish; where I can see and feel the impact of our programs on our community,” McCabe said. McCabe, who is seeking to become Norfolk’s next mayor, has pledged to shift the city’s priorities to offer better service to the neighborhoods. His top goals are stronger schools, safer neighborhoods, real transparency at city hall, and being more business friendly.

“Whether you live in Berkeley or Campostella, the east side or west side, all people want the same things,” he said. “They want safe neighborhoods, great schools, and access to affordable housing.” When McCabe took over the Norfolk Sheriff’s Office 22 years ago, the FBI was investigating the previous administration for corruption. Today, Inside Business Publication has named the Norfolk Sheriff’s Office one of the best places to work.

As sheriff, he has introduced several innovative programs inside the city’s jail, including opportunities to help inmates find jobs, to earn their GED or high school diploma, therapy to overcome substance abuse, a fatherhood program to teach dads to become better fathers, and volunteer-led classes like creative writing and art. He said, as mayor, he’ll use his organizational experience to expand programs in the community to help strengthen families.

“More affordable housing options will also go a long way in building stronger communities,” he said. “More than half of our residents have to spend 30 percent of their income on just paying rent. We should offer incentives to builders in order to promote the development of more affordable housing options.” He noted Norfolk families want access to more shops, restaurants and grocery stores near their homes. Currently, he said, it takes about 90 to 150 days to open a small business. He wants to make the process easier by cutting the red tape to create an express lane to open small businesses.

On the campaign trail, McCabe has been driving home the need for quality education in order for businesses to thrive in Norfolk. He said he remembers attending a civic league meeting 34 years ago, and hearing a real estate agent say that families don’t want to live in Norfolk because of the quality of Norfolk’s schools. “The problem still exists today,” he said.
As mayor, McCabe said he would like to implement the “community schools model.” Basically, this sets up the school as the center of the community, and after school, children are offered wrap-around services, including mentoring, sports, tutoring, health and dental care, to name a few.

Community schools are funded through federal grants and include partnerships with local businesses, non-profits, volunteers and parents. McCabe said he has years of experience forming community partnerships to provide opportunities for children and senior citizens. Two programs he points to proudly are the Sheriff’s Office “Senior Watch” program which does wellness checks on nearly 200 seniors in Norfolk, and “Project Lifesaver” which tracks and keeps people with dementia safe.

The Sheriff Bob McCabe foundation provides turkey dinners to about 500 families every Thanksgiving and Christmas, and school supplies and uniforms for Norfolk students. During the summer, he works with community partners to offer six weeks of free summer camps for children, ages 10 to 13. To date, more than 5,000 Norfolk children have attended Camp McCabe which is now open for registration. (Visit Norfolk-Sheriff.com. McCabe said he is looking forward to being the next mayor and will retire to keep a full-time schedule that will allow him to meet with community leaders and business owners. ‘I will work to earn your trust every day,” he said. Sheriff McCabe recently won an endorsement from former Attorney General candidate Justin Fairfax. The Norfolk Police Union has endorsed him as the best candidate to improve public safety.