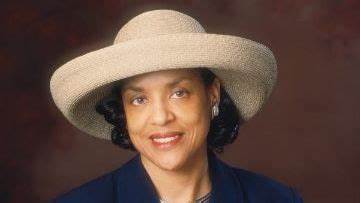 Shortly after Portsmouth City Manager, Dr. Lydia Pettis Patton announced her unexpected resignation on Tuesday (Sept. 8), the city council fired the City Attorney.
The council voted 4-3 to accept Patton’s resignation with the three Black councilmembers voting not to accept it.
The white majority on the panel, during the emergency meeting which addressed Patton’s resignation voted also to fire Solomon B. Ashby, the City Attorney. Patton and Ashby are African American, and Patton recommended his appointment.
This was confirmed by the GUIDE with Vice Mayor Lisa Lucas Burke.
Patton, who has been enmeshed in controversies surrounding the fight to remove the city’s
Confederate monument and other issues, is departing before her scheduled retirement and exodus in late December.
“Through prayer and reflection, I have decided that in the best interest of the city of Portsmouth, to step aside immediately as City Manager conditioned upon the city meeting its obligations owed to me under my contract.

I have served this city with honor and dedication and I want to leave the city as I came in 1986 with honor,” Pettis Patton wrote in an email to city leaders,
Dr. Pettis Patton gave no reason for her resignation, after three and a half decades working with the city in various capacities.
She was the city’s first African American City Manager, a position she held since 2015.
The council appointed Lavoris A. Pace, a native of Smithfield, as the interim City Manager. He was the city’s Director of Communications and Marketing before ascending to Assistant to the City Manager.
Pace has an undergraduate degree from Norfolk State University (NSU). He majored in Graphic Arts and Advertising Design. He also studied at Virginia Tech, according to his biography.
According to various news sources and rumors among city leaders, the council had planned to fire her and City Attorney Solomon B. Ashby, Jr. during the Sept. 6 council meeting
It is said the firing would not be related to the suspension of Police Chief Angela Greene, who was placed on administrative leave by the City Manager last week for 30 days.
Greene will remain in that status, pending an internal investigation.
Greene, who is African American and female, filed felony charges against Sen. Louise Lucas and other citizens surrounding the vandalization of the Confederate monument in the city’s downtown. In doing so, she bypassed Commonwealth Attorney Stephanie
Morales, who is also African American.
This created the current controversy and vocal calls for the Chief’s resignation mainly by members of the Black community. Greene has gained support mainly by members of the white community.
Just why Greene and members of her department filed the charges against Lucas is still unclear. But the various Black civic leaders say it is due to the pressure from the powerful Fraternal Order of Police (FOP) union, which is mostly white and male, as are most of the officers in the Portsmouth Police Department.