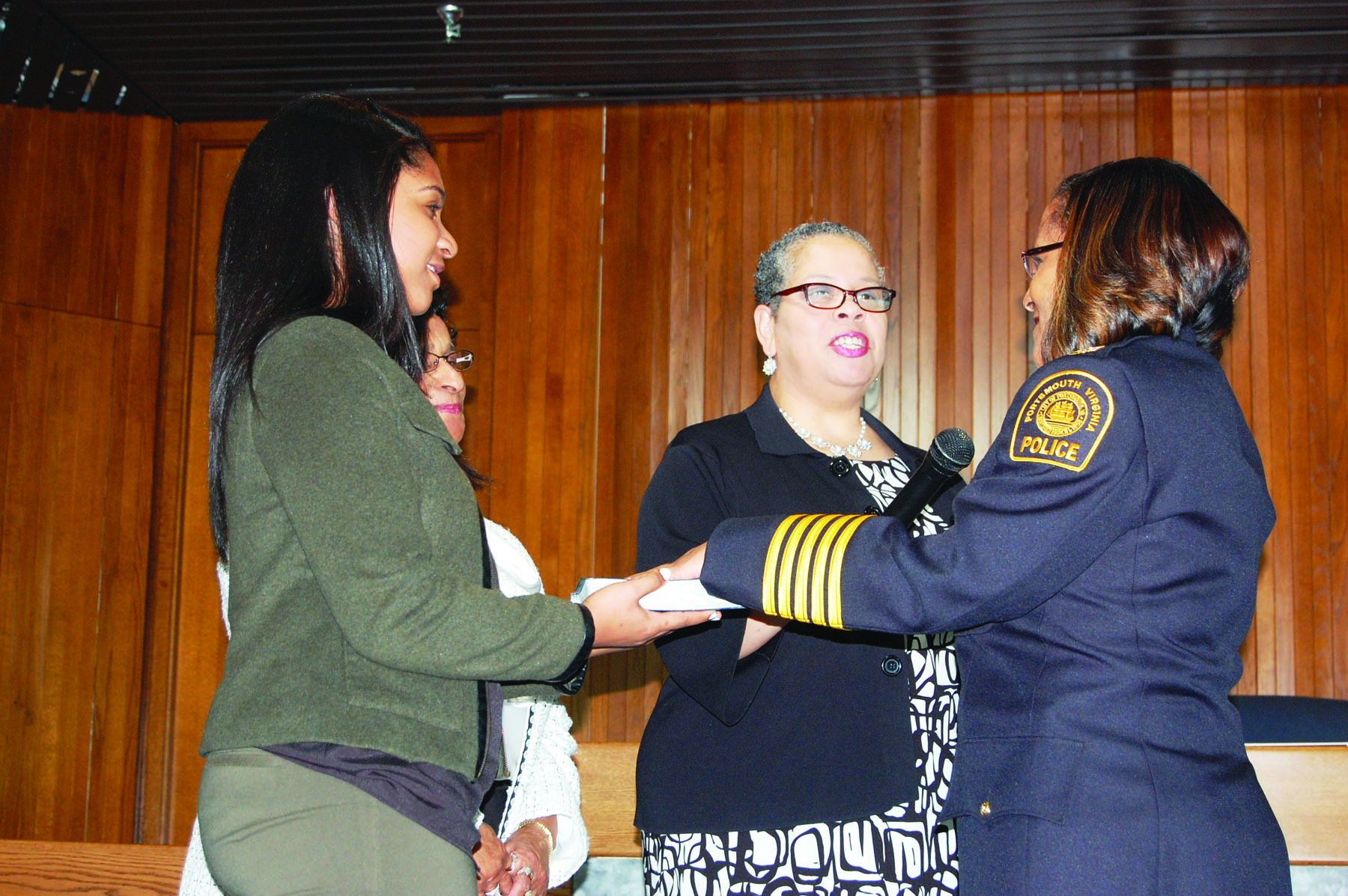 Tonya Chapman is a member of a very small and elite group of law enforcement professionals. She is one of 200 women in this nation who are Chiefs of a police department.
Chief Chapman was the first African-American woman to be named a month and a half ago to lead the Portsmouth Police Department. That places her in an even smaller club: a Black female Chief of an urban police department.

In the March 2016 edition of Police Chief Magazine, an article entitled “Policewomen: Their First Century and the New Era” by Peter Horne, Ph.D., pointed out the growth of women in law enforcement has been a slow one. Horne, a Mercer College professor, noted only 1 percent of the nation’s police officers were woman in 1971, and today out of 800,000 people involved in the various form of policing, they make up only 13 percent.

The first women who were hired in a law enforcement role were ‘matrons’ who worked at jails or the courts handling cases involving mostly women and children, around 1840. In 1893, a woman by the name Marie Owens was hired as “patrolman” at courts in Chicago where she dealt with women in jury standing before the courts. In Portland, Oregon, in 1908s, Lola Baldwin was hired as a police detective, the first woman hired for true policing duties.

Each city has recorded that first time when a woman opened the glass door and entered a profession dominated by men. Chief Chapman’s professional career in law enforcement spans over 25 years. Before she arrived in Portsmouth, Virginia’s Governor Terry McAuliffe appointed her as Deputy Secretary of Public Safety and Homeland Security in 2014. In 2011, she served as Deputy Chief of Police with the Richmond Police Department.

The mother of one daughter, she is the first Black female chief of a municipal police department in Virginia. Does being a woman bring a different perspective on leadership and devising strategies on fighting crime, the new Chief was asked. “I am not sure I can say that I bring different attributes compared to men so far as leadership is concerned,” she responded. “I do bring empathy, passion and compassion for the community and the officers. I am sure there are men who have the same attributes. I like engaging the community. And I believe the community wants us to be engaged.”

Before beginning her policing career, she student-taught at a public high school. It was a brief experience she found difficult. “I was so young … 21 years old and teaching kids who were 17 or 18. I could not connect with them,” she recalled. “The young men wanted to date me and the girls wanted to fight me. So teaching was not for me.” Chief Chapman, in her short time on duty as the leader of the PPD, has inherited a department that has its share of positives and challenges seeking to serve and protect an urban center like Portsmouth Manpower, updated equipment and relations with the community are just a few challenges urban police departments are confronting, as fighting crime has become more complicated.
Chapman said she wants to cultivate a new culture among the PPD officers.

“We need a different perspective on how we police and how we patrol to use resources we have more effectively,” said Chapman. “We want to redeploy our resources geographically to protect the community better. We need to reach out to the civic, faith and business leaders.” “We know fighting crime is not just a policing issue,” she said. “We want to involve all of the city departments to look at the personal, economic and environmental factors which will help us do our job.”

One of the most obvious challenges for Chapman is diversifying the demographics of PPD. The Portsmouth Police Department currently has 238 sworn officers, of whom 63 percent are White males and 27 percent are females and/or minorities. “I have some work to do,” Chapman admitted. “I cannot explain why African-Americans are shying away from policing. But it is not a field minorities, including Hispanics and Asians, are attracted to. So we have to recruit and remarket ourselves. There are so many positives to being a police officer, but it only takes one negative incident to destroy the good work police officers do.”

While serving as the Human Resource Commander for the Arlington Police Department, Chapman said, to increase minority representation in that agency, the department used minority media, especially the Hispanic outlets, and did outreach work to civic leagues, churches and colleges. Chapman said recruitment should be directed toward changing the mindset of young members of minority groups to recast their view of policing. “We need to engage the youth via police athletic leagues (PAL), School Resource Officers, Explorers programs, and other programs n the schools,” she said. “We must use these as recruiting tools.”

The inability to attract minorities to the ranks of policing, studies show, and Chief Chapman realizes, is lodged in the chilly relationship between the police and portions of the Black community, in cities where the populations are largely minority. Tensions in her city were heightened due to two incidents of police shootings of African-Americans last year. One officer has been indicted for his role in one of those incidents and will be tried later this year.

To ensure individuals are treated fairly, Chapman said PPD has secured a “ Procedural Justice” police training grant from the Department of Justice. “I attend roll calls to talk to my officers about making the right decisions,” said Chapman. “Also during in-service training, our officers are reminded of the other tools they have to resolve a situation besides their weapon.” Chapman said that during her short tenure she has driven about the city, touring various neighborhoods. In the neighborhoods traveled, she has seen young men standing on street corner or in front of dwellings.

She said she does not want to pre-judge their intentions; however, idleness due to lack of employment, sometimes leads one down the wrong path. Chapman said she wants to promote better community-police interaction and cooperation, to curb crime committed by young men who are involved in negative behavior. Recently, she was invited to a program where the Tidewater Metro Baptist Ministers Conference, based in Norfolk, unveiled a program to have church leaders “speak out” from the pulpit against crime in the Black community.

One consequence of the meeting has been installing “Anonymity Boxes” in area churches where people can drop in tips about suspected criminal behavior without revealing their names. Police Resource Officers will access these boxes and use the tips to combat crime. Some persons in the Black community criticized them as “Snitch Boxes.” “I think those boxes are a good idea,” said Chief Chapman. “Many people refuse to call the police, assuming we will not be responsive. We need people to trust us to respond to their needs. But they must get out of this silence mentality … this attitude that ‘I do not want to snitch.’ Silence breeds violence and this makes our job harder to fight crime. I want people to use the crime line and receive the benefits if a tip helps us solve a crime. “To build that trust and legitimacy, ” said Chapman, “I want our officers to get out of the cars and engage our community.”