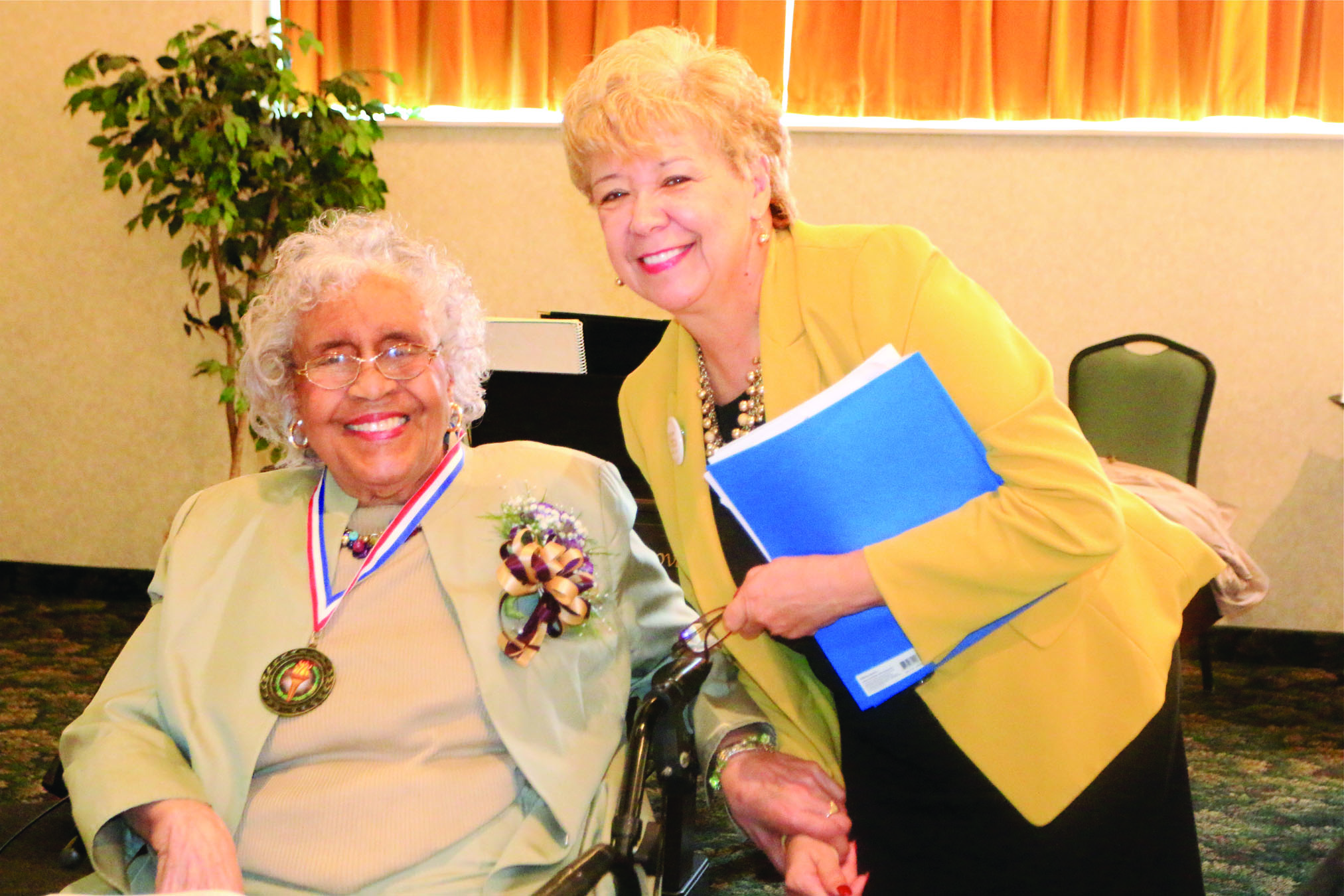 According to her family, she passed away quietly at the Lake Taylor Transitional Center in Norfolk, Virginia after battling a lengthy illness.
She was 94 years old.

Her funeral will be 11 a.m., on November 18 at the Murray “Taste and See” Center adjacent to the Historic First Baptist Church, Bute Street, her life-long church home in downtown Norfolk.

Before Dr. Peevy began recording the people and events that made up the elite and widely read civic and social world of Norfolk and Hampton Roads, her name was often included in the column or in articles of the GUIDE.

Peevy was involved in various organizations – civic, political and professional –before she took over writing the Social and Civic Whirl column in 1981, according to the Guide Archives. She served famously as a local and national leader of the Iota Phi Lambda Sorority, and in 1972, hosted the sorority’s annual Business Week luncheon locally.

Lula Sears Rogers, her youngest sister, said her sibling was the 7th and she was the 15th child born in the Sears clan. The family lived in the Old Huntersville section of Norfolk, “ where everybody stayed and everyone knew each other like family.”

The big busy house attached to what people would call a “confectionary store” back from the 30s to the late 50s, but today it would be called the “corner” or “convenience” store.
It was a source of income for the family and it served the entire community’s needs.

The family sold everything from food, copies of the Journal and Guide newspaper, to wood for stoves at the corner of Washington and Proescher Streets.

The only post office owned and operated by Black people in the “colored section” of Norfolk was housed there, too.

Rogers recalled her mother was the Post mistress, and handed out mail, stamps and money orders over the counter before there were mail carriers.

All of the Sears children, at one point in time, worked in the store, including Evelyn, until she ventured off to Hampton Institute where she majored in English education.

“The year Evelyn graduated from Booker T (Washington High School) and went off to Hampton in 1941, I was born,” said Rogers. “She was 18 and she was beginning her life as an adult and I was just coming into the world.

By the time Lula completed “Booker T.” the year the city closed the schools to deter Blacks from desegregating seven all-White schools, her sister was gaining steam in her career in the Norfolk Public Schools.

Along her career path, she earned her Master’s degree and a Ph.D., recording a 40-year career before retiring from the field of education.

Peevy was first a teacher and then Guidance Counselor at Jacox Junior High School and Norview High School and other sites. She also taught night school at Norfolk State.

She was initially married to a Harry Taylor and the couple had three children: Harry, Jr, Eunice and Pat.

She later married ex-military man Goldman Peevey, who after leaving the service, became a highly regarded Chef at the Lake Wright Hotel.

“During the holidays the whole family would go out there to eat and he (Goldman) prepared everything,” said Rogers. “Along with being a faithful husband, he was live-in chef for Evelyn and supported her in everything. There was always something good to eat, especially on birthdays because he would make those huge cakes.”

Dr. Peevy devoted a great deal of her time and energies to the Historic First Baptist Church, Bute Street, the oldest Baptist congregation in Norfolk.

She was a Trustee, a guiding forces on various committees and ministries sponsored by the church, including the one that recruited and trained missionaries for work in the ministry overseas and domestically.

But one of her biggest triumphs was securing the services of the church’s current senior pastor.

Thirty-seven years ago Rev. Robert G. Murray was preaching at Westwood Baptist Church in Richmond and Peevy got wind of his skills and charisma.

Alone, her sister recalled, Peevy drove up to Richmond to scout out the young pastor and see and hear for herself how he handled himself in the pulpit.

According to Rogers, she was so impressed she introduced herself to him. Then she convinced the Pulpit Committee to accompany her on a mission to Richmond to see the young minister for themselves.

“There were several other candidates for that job,” said Rogers. “The pulpit committee finally got to a final three, then two, then it was Murray. That was one of her finest achievements.”

Known as the “Chairman of the Board” of the Peevey clan, her leadership and drive were demonstrated not only in her church work, but in the Eastern Stars, the 100 Black Women’s Club, Lott Carey Missionary Society, being the first Black woman on the Norfolk Election Commission, and other work politically and in charitable causes and organizations.

In 2016, she was one of the GUIDE’s Impacting Lives Honorees, one of the last public appearances she made.

According to her sister, Dr. Peevy as a child was rather quiet, but as she aged, she became more socially and personally aware and educated on the affairs of the world, “She could handle her own and talk about any subject with great depth,” said Rogers.

“My sister’s legacy was that she was a very. diplomatic, honest, hard working civic, political and social leader,” said Rogers, who lives in Chesapeake. “Everything she pursued, she did it professionally. She did it because she cared about her community, its institutions, especially her church and, of course, her family. In everything she did, guided by faith and love, she rose to the top and led, and she did it professionally.”