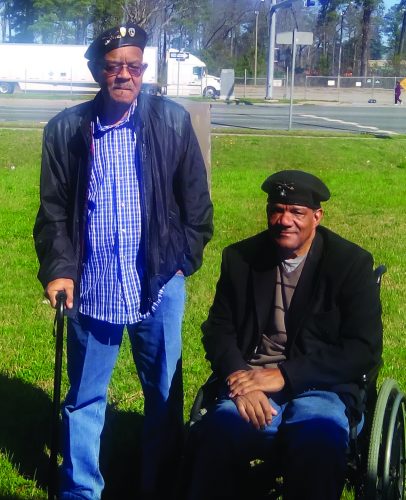 In 1967, while America was in Vietnam fighting to implant democracy abroad, Theodore Hall was wondering if it would ever come to his hometown of Norfolk.

“All I wanted to do, as a child, was to go into Smith and Welton Department store, sit down, order food and sit and eat it with respect and dignity,” Hall recalls. “Racism was so bad in this city I could not even do that in the 60s.”

In 1967, Hall, 19-years-old, knew his draft number would come up eventually, so he volunteered.

He lived with a foster mother on Chapel Street in Baraud Park.

After graduating from Booker T. Washington High School, he wanted to make something of himself and the military was an option.

He arrived for basic training in September 1967, at Fort Jackson in South Carolina. Hall discovered he could easily adapt to the regimen which equipped him with the skills to stay in battle.

He also discovered his younger brother Cecil was training at the same facility.

“I had no idea he had joined weeks before I did,” said Hall. “He was in a training across the field from me. He was afraid for me and I was afraid that he would die. But I knew the Lord would take care of us both.”

For Theodore Hall, AIT was demanding, but not as socially restrictive as boot camp, so he said he got a chance to relax.

The Age of Aquarius was in full bloom and Hall ran into a world a bit more liberal than his native Virginia.

“There were boundaries sexually and socially (in Virginia),” Hall recalled. “In California … there were none. There were bars for Gays and straight … you could partner with anyone … drugs were everywhere … leave your clothes at the front door. They said God was dead.”

Hall was called “country boy” because of his cultural reserve.

He did not drink or smoke and stayed away from the variety of illicit drugs and other pleasures his fellow soldiers were eager to taste.

Assigned to the Army’s First Calvary, he was sent to South Korea initially. Then in December of 1968, his unit was shipped to South Vietnam.

The fighting had been heightened 11 months before by the Tet Offensive one of the largest military campaigns of the Vietnam War, launched January 30, fifty years ago.

The enemy North Viet Cong launched a ferocious attack against the forces of the South Vietnamese and the USA military and civilian command and control centers.

Theodore Hall reunited with his brother again in Vietnam. Cecil said he missed the brunt of Tet offensive by four months, arriving at Tay Nigh months before his brother. He said was never involved in combat. But he had a host of other jobs, including cook, guard duty and delivering supplies to troops in the field via truck convoy.

Theodore Hall said the 1st Calvary had more Black Commissioned officers and high ranking enlisted men than any other unit.

“The brothers of the 1st Calvary were unified and organized,” recalled Hall. “They had established a reputation as effective killers out in the field. The Black officers worked well with the men. They had to be better as leaders. They were sent out to help Army and Marine units who were in trouble.”

Hall said his unit took its share of battering in the form of firefights and shelling.

“The other guys stayed high to calm their nerves,” recalled Hall. “I did not and they thought I was an undercover agent, there to tell on them. I needed to stay sober because I wanted to stay alive. But when the shooting started, everybody sobered up.”

Hall recalled one day his unit was helicoptered out into the field with other units, one of which included his brother Cecil.

A Black medic, with the help of other Black men in the unit, invoked a little known law in battlefield doctrine.

“Two blood brothers could not be on the battlefield at the same time,” said Hall. “So they put me on a chopper, with the dead and dying, back to camp. My commander called me a coward. But I think I was saved … thanks to my brother.”

Eventually Theodore Hall was pulled out of Vietnam and sent to less dangerous and more “luxurious” duty in Japan with a military police unit.

“The Black officers helped me get out of Vietnam,” he recalled. The White officers wanted to send me back as soon as Cecil left Vietnam. They knew I would be killed. God knew what he was doing.”

“There was some change … racism was still obvious,” he said. “You could sit in the Smith and Welton restaurant. They were slow serving you … but you did get served. Blacks could not serve nor could they operate the cash register. We still had a ways to go.”

With the help of the STOP Organization he earned skills as a welder.

He and his brother also signed up for the Army Reserve in 1974 to get some extra money. He recalls they applied his military leadership skills at Camp Pickett,, Virginia for yearly training.

“White guys listened to me and some of the brothers did not,” recalled Hall,who was sergeant by then. “There was one Black soldier I really had trouble with.”

Hall recalls leading truckloads of soldiers out in the field for various operations. The troublesome soldier, Hall recalled, had a tendency to lose his hat in the wind. The truck had to stop, allow him to retrieve his head gear. He did not listen to Hall’s instruction to avoid it.

One day, the hat hit the wind and instead of reclaiming it, the truck drove back to base. Hall’s commanding officer ordered him to retrieve it.

Hall’s truck overturned enroute, and he was penned beneath it. Not able to breathe, he was assured death would claim him.

His brother, who was in another truck, spotted the accident.

Cecil Hall and others were unable to free Theodore, but they went for help and Theodore survived.

“When I first looked at him, he did not look conscious,” said Cecil Hall. “But he came to and started instructing the guys in how to save him. He was motivated to hang onto life because he did not want me to see him die. The people in the hospital did not believe he stayed conscious.”

Theodore Hall, then 29, lost the use of the lower extremities and would be bound to a wheelchair for the rest of his life.

His brother, Cecil, and other soldiers received Medals of Commendation for saving his life.

“By the grace of God. if it were not for my brother, I would be dead,” said Theodore Hall. “I could have died or been brain dead due to lack of oxygen.”

Hall was sent to the West Roxbury Veterans Hospital in Boston, where other soldiers with varied spinal cord injuries and levels of paralysis were treated.

“I went through extensive rehabilitation and learned to move about,” recalled Hall. “In Roxbury, they taught you how to be independent despite your injury.

“They did not allow anyone to push you in a wheelchair or give you a motorized one. I still don’t use one. I did not want my muscles to get weak; that will kill you.”

The Hall brothers live in Norfolk now. Cecil is active in Portsmouth’s Faith Evangelical Church. He mentors inmates at the Regional Jail, helps with the homeless, volunteers at the Wesley Center.

This time of year, Theodore attends Black History Month events, especially this year with the theme “African-Americans in Times of War.”

He shared his memories with the public during a recent panel discussion with other vets at the Slover Library.

“Me and my brother are still close,” he said. “We talk about how he saved my life twice.

“We were taught by our family that God and caring for family was important,” Theodore Hall said. “Look out for them. Many people are more concerned with money and fame. But God, family and friends – you cannot forget them.”