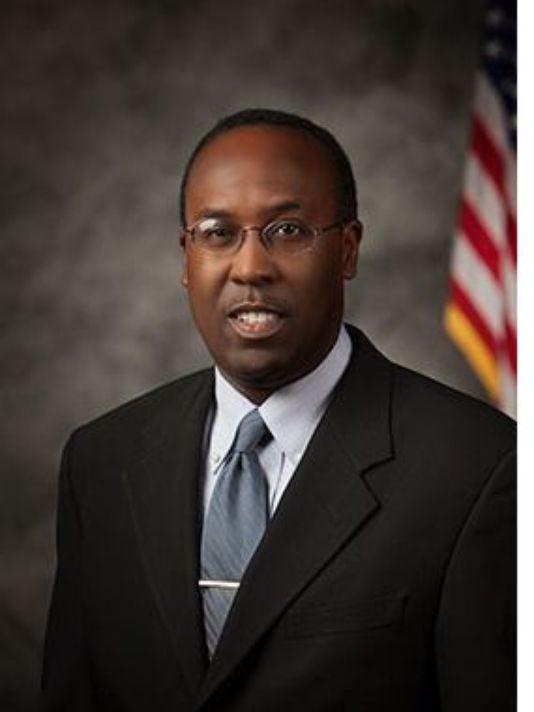 Dr. Mark Whitaker has maintained his innocence and belief that prosecutorial misconduct is behind the indictment and conviction on forgery charges that were inflicted on him two years ago.

Many in the Portsmouth community, including Black Pastors, Community Leaders, and the Portsmouth Branch of the NAACP have expressed that an investigation of Whitaker by the Portsmouth Sheriff’s Department was inappropriate, political, and even, racist.

Whitaker, a former City Councilman, was removed from his seat on Portsmouth City Council in 2018, following a case against him that he says should never have gone to trial. Today, he is on the 2020 ballot in Portsmouth hoping voters will return him to a new term on the city council.

He continues to call for the justice he feels was denied him two years ago.

Based on an investigation by the New Journal and GUIDE which researched and secured documents, emails, and special grand jury testimony inadvertently transmitted to the public in 2018 by the Office of the Clerk of the Portsmouth Circuit Court, the claim of innocence by Dr. Mark Whitaker appears correct and the community support of him was merited.

Initially charged with 20 counts, a Portsmouth Judge reduced the charges to three.

Whitaker and his lawyer, Attorney Don Scott believe the remaining three charges used to convict him were suspect because there was never a victim in the case.

All three charges are related to business loans from the New Bethel Federal Credit Union, founded by New Bethel Baptist Church, where Whitaker is the Assistant Pastor and his father Bishop James M. Whitaker is the Pastor. The church created New Bethel Development, LLC to finance and redevelop a drug-infested 13-acre site located beside the church.

Chief Judge Billy Moore appointed Ross Spicer of Frederick County as the Special Prosecutor, who assigned the case to his Deputy Prosecutor Andrew Robbins who formerly worked for the Portsmouth Commonwealth’s Attorney Office. Contrary to Virginia Code 19.2-211, Special Prosecutor Ross Spicer, not the special grand jury as required by VA Code 19.2-211, requested that Captain Lee Cherry and Investigator Brett Johnson be appointed as special assistants to the Special Grand Jury.

Neither Cherry nor Johnson had any experience in investigating such cases, according to department records. It was no coincidence the Sheriff’s Department, led by Bill Watson, was a political foe of Whitaker.

While on the City Council, Whitaker voted to reduce the budget of the Sheriff Department budget and openly criticized Watson for the lack of diversity in his department.

According to testimony obtained from documents made public by the Clerk of the Portsmouth Circuit Court, Johnson lied under oath before the special grand jury when he stated, “Chris Suber was another tragedy all alone, this poor guy got taken for $1 million…every dime

According to the transcript, Johnson said Whitaker “pressed Suber to pay the $22,000 in mortgage payments when due, but Whitaker took the money causing the venture to be foreclosed on by the bank.”

Documents provided to the GUIDE indicated from November 29, 2010 – September 29, 2012, Suber provided $915,000 to New Bethel Development, LLC to assist with paying the mortgage, real estate taxes, and other expenses related to the 13-acre project.

Documents confirmed all of the funds paid by Suber were deposited directly into the New Bethel Development, LLC SunTrust checking account. Furthermore, the investigation by the GUIDE reveals the

funds were used to pay the mortgage, taxes, and other LLC expenses, but none of the funds were used by Whitaker as testified by Brett Johnson before the Special Grand Jury.

The GUIDE also obtained an email document from Southern Bank confirming payment of the mortgage coinciding with funds provided by Suber. Investigator Brett Johnson and Commonwealth’s Attorney Robbins knew of the email from Southern Bank, but chose not to enter it which tainted the character of Dr. Whitaker before the Special Grand Jury.

Furthermore, based on information obtained from a source and documents inadvertently made public by the Clerk of the Portsmouth Circuit Court, Johnson testified before the Special Grand Jury that New Bethel Federal Credit Union was missing $240,000 because according to Johnson “No loans had been repaid.” Again, information and documents obtained by the GUIDE confirmed all loans were paid in full.

The CPA for New Bethel Federal Credit Union confirmed all loans were paid in full.

In fact, documents from a CPA

According to documents, the fourth untruth that ultimately led to Whitaker’s conviction involved Whitaker being charged with stealing the Identity of two individuals by using their social security number on loan documents without permission.

The investigation by GUIDE revealed there were never any social security numbers used for that purpose or a credit check.

Another twist in the case: A subpoena was issued for Investigator Brett Johnson to testify in the criminal trial against Whitaker in July 2018. However Johnson, the lead investigator, never appeared in court. In fact, according to various sources, no one has been able to locate Brett Johnson since the trial.

Commonwealth’s Attorney Robbins accused Whitaker of committing forgery on three counts against Kevin Blount, who was a business associate with Chris Suber. However, Blount never filed charges and stated Whitaker did nothing wrong.

“Our history is replete with accounts of weaponizing the criminal justice system to silence the voices of African Americans who speak Truth to Power,” said Whitaker.