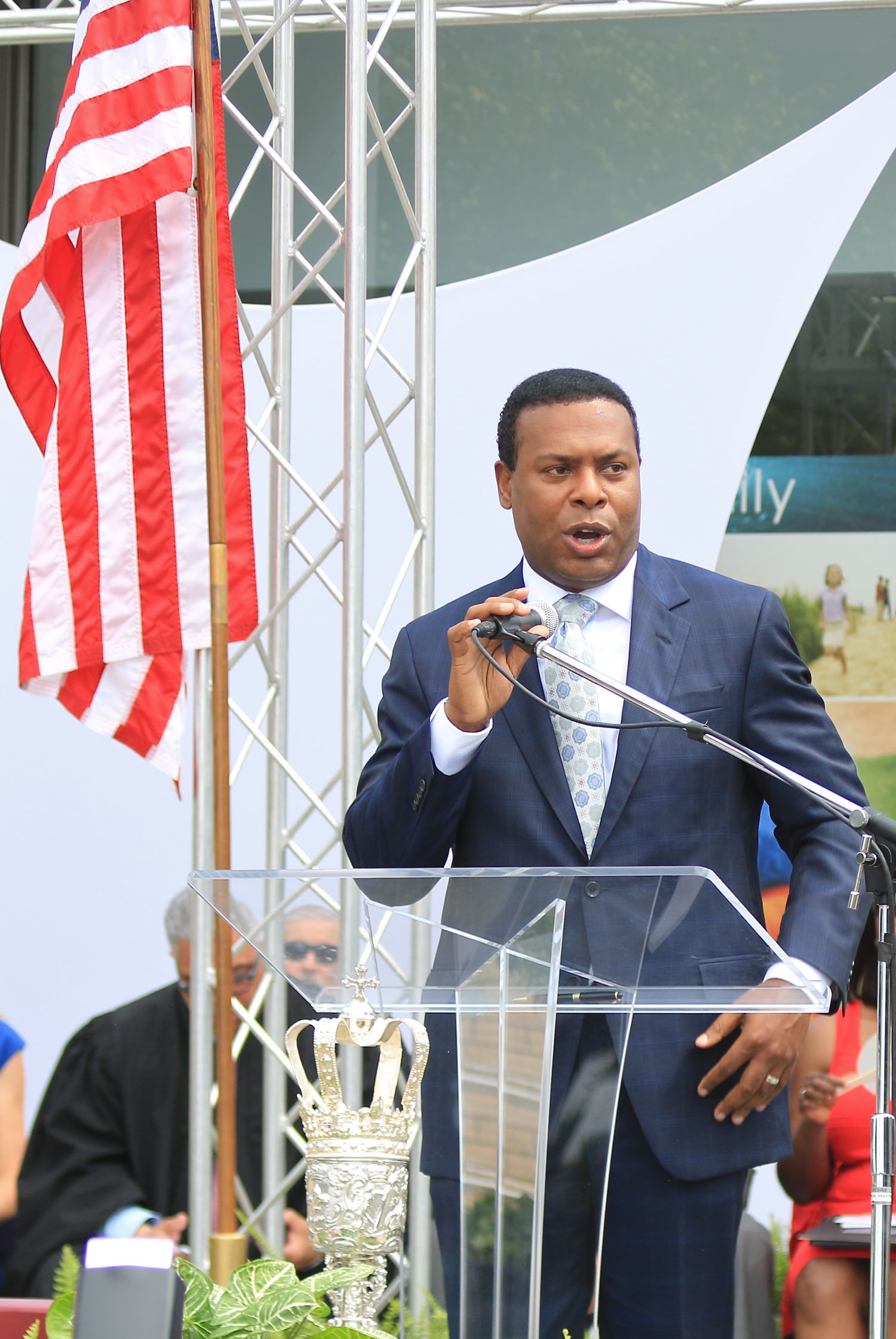 A week earlier, he had conducted an hour-long interview with the New Journal Guide where he talked intimately about his views on various issues, policies and his own frustrations since being sworn in last year as the city’s first Black mayor.

Asked about the most nagging shortcoming he has noticed since taking office, he talked about dealing with education and funding support for teachers.

“You have teachers who deserve raises and funding for professional development,” he said. “They spend a lot of time preparing and accessing examinations, and they are spending their own money on supplies.

On building consensus policies and programs, Alexander said that “we build initiatives together.”

“I keep them informed on initiatives, legislation and we get together and draft it,” he continued. “Then we allow a council member or two to take the lead to share the presentation and the winning for the city.”

During his State of the City address, Alexander ticked off a list of development projects in the downtown sector. But the Guide asked him about the lack of a Black business footprint in the booming downtown business corridor.

He mentioned that other businesses are in the works.

Alexander said he is aware of the commercial and retail business “deserts” in underserved areas of historically Black sections of the city and the perceived high cost of operating in them due to crime and other issues.

He mentioned there should be some incentives for pubic and private partnerships to recruit commercial investment in these areas. This includes small “mom and pop stores” or others which want to launch an idea.

“I have been and will continue to work on this issue. My job is to connect the businesses and opportunities and just get out of the way,” said Alexander.

Alexander said he is also concerned about the “food deserts” in the areas which lack grocery stores providing healthy fruits and veggies.

“A food desert leads to health problems such as strokes, cancers, heart disease, high blood pressure,” he said. “A lot of those diseases are preventable. Also what about hygiene products and dental care products? We have an obligation that all of our citizens have access to these products.”

On the issue of the indictment and jailing of former Norfolk Councilman and Treasurer Anthony Burfoot, Alexander had a mixed perspective.

He and Burfoot grew up in Berkley and were high school classmates.

“I value our friendship,” he said. “I know his family … mom and sisters … on the personal side you grieve like somebody back home.

“But then there’s the side of you that was elected, took an oath of office to insure that justice and the rule of law are upheld with respect for the law. You have to separate the personal feelings from the rule of law.”

The biggest criticism hurled at his administration by some since taking office is that “nothing has changed,” he said.

“There are people who believe that the government can solve all your problems or refuse to do so.”

Alexander said he believes in limited government and that it cannot resolve all of the social and economic issues facing people.

He believes that public-private alliances which include the churches, civic and fraternal organizations should play a broader role.

“I hope they will level up and become more independent and free of government,” he said.

The main handicap of his new job is “I spend too much time away from my children,” he said. “I have a son who is 16…a critical age for him as he learns how to drive. There is also my 13-year-old.”

But what he likes most is that “on any given Tuesday during council meetings you can change a person’s life.” We make decisions on land use, land zoning, connecting, building schools, closing a street, matching a business with a need and a person with a skill set who needs a job.”

Alexander mentioned that some 6,000 plus jobs are being created in Norfolk, bolstered by ADP, Optima and Movement Mortgage moving into the old J.C. Penny space at Military Circle Mall, a new major IKEA furniture building, and a new outlet mall, as well as other corporate migration to the city.

Alexander said the city also is in good financial shape with a $2 billion operating budget and over $800,000 in “discretionary” funds.

“Once all of these new job creators are up and running at projected levels, the City of Norfolk will realize new gross annual tax revenue of over $12 million per year.”

With the growth in jobs in Norfolk especially downtown, Norfolk, with a population of roughly 250,000, provides more jobs than any city in the region, Alexander said – 210,000.

Alexander said the city is more competitive with adjacent locales. But he also pointed out the importance of regional competition such as the corridor around Richmond, with its 1.2 million people, and Gross Regional Product (GRP) of $86 billion, the same as Hampton Roads which has 1.7 million people.

Alexander said the opening of a “Regional Career Technical Center” where residents could learn high tech skills is needed for the current job market and would be a boon for the area.
This could be complimented by high school courses and studies in vocational trades and the arts to prepare students for employment after graduation.

Thus far 11 people, including a small child, are victims of homicides in the city. Most are African-Americans, in many instances, the resolution of petty squabbles. There were 20 such incidents last year at this time, Alexander pointed out.

“We’ve got work to do,” he said. “We need a little of everything to deal with the causes … a lack of self esteem,” he said, “What happened to ‘sticks and stones may break your bones, but words will never hurt you’”?

“We’ve got to break this cycle.”