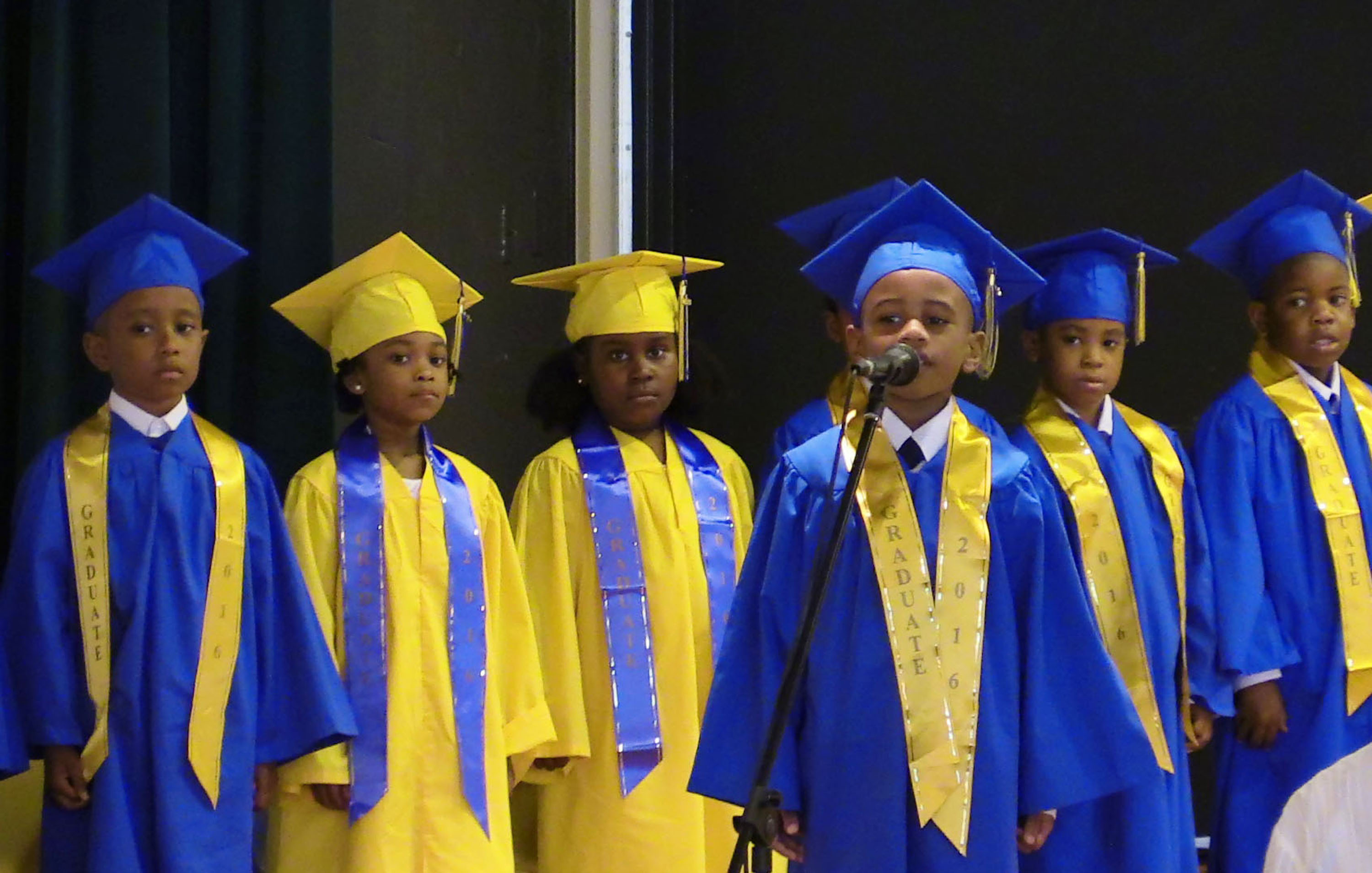 The Rev. Dr. Robert G. Murray was impressed with the church-owned school he toured at a denominational meeting in Texas; to the point that he returned home to Norfolk, and launched READY Academy at the historic First Baptist Church-Bute Street.

READY Academy was launched in 2004 with 22 students. It currently has 157 students, an impressive curriculum, and about 100 seasoned volunteers and 100 donors. This means READY Academy brings two facts sharply into focus. Black churches not only taught reading, writing, and arithmetic to newly freed slaves in Sunday school or weekly Bible classes. Black churches now provide upgraded educational services including after-school tutoring programs, computer classes, financial seminars, cancer-survivor classes, and exclusive worship services for youth. In other words, as the nation examines this year’s Black History Month theme: ‘The Crisis in Black Education.’ The historic First Baptist-Bute Street illustrates the impact that these churches have had through the years.

“It was a vision the Lord gave him,” said his wife, Amanda Battle Murray, who heads READY Academy, which serves students ages 3-11. “Pastor Murray went to an American Baptist Conference and went on a tour. He was so impressed with the children he saw in the school in Texas. He noticed how disciplined they were. He returned home and offered to buy a nearby building. But when we applied for the building the owners told us they would never sell. Soon, they came to us and asked us to buy the building.”

The rest is history. “We have so many skilled, competent, and dedicated volunteers,” Amanda Murray said.

She pointed out how Charles Corprew Jr., a former Norfolk Public Schools principal was chair of the board of directors at READY Academy when it opened. Lisa Anderson is the current board chair of READY Academy, which is operated by the 217- year-old church.

“Our school is full of so many experienced educators,” Amanda Murray added. “For example, we have an experienced security person who turns up first thing in the morning when we open the doors. We have many experienced educators who volunteer. We have experienced clerical workers. We have state-certified volunteers who teach classes in music, Spanish, and even swimming off-site. We have parents who hold professional positions at local universities such as Norfolk State and Old Dominion. They come in and do demonstrations or serve as guest speakers.”

Black churches, in other words, continue to provide educational opportunities, a mission that dates back to slavery when newly freed slaves would learn how to read by reciting Bible verses in Sunday school and weekly Bible classes. Black Baptist associations by 1900 were supporting about 80 elementary schools and 18 academies and colleges. Meanwhile, African Methodist churches were funding 32 secondary and collegiate institutions; and the smaller AME Zion denomination was supporting eight.

Black churches, these days, are tackling headline-grabbing problems like juvenile delinquency, strengthening families, and improving math and reading skills. For example, from 2002 to 2004, there was a 50 percent increase in the number of faith-based organizations that received state funding to provide juvenile delinquency prevention services in several states including Florida.

Another example is Shiloh Baptist Church in Washington. D.C. It established a Family Life Center to strengthen and nurture families. Meanwhile, 10 churches in Jackson, Tenn. launched a tutoring program for children that live in public housing in Jackson, Tenn. About 350 youngsters travel on a church bus to meet with 250 volunteers who pore over homework with youngsters who want to improve their reading and math skills. Meanwhile in Georgia, the 6th Episcopal District of the AME Church launched an America Reads Challenge project with emphasis on rural areas.

In Norfolk, Amanda Murray said the effort at READY Academy continues to surge. “We opened with 22 students in Pre-K-3 and Pre-K-4,” she said.

“Our goal was to add a grade each year up to third grade. Once we accomplished this goal, I thought we had reached our goal. I told others, I am sure we have already done what the Lord told us to do,” she said, laughing softly.

“Soon, we added the fourth-grade class in 2013. And we started our fifth-grade class in 2014. My assistant is a full-time volunteer. Her name is Rosa Edwards. She is a retired physical education specialist who retired from the Virginia Beach Public Schools system.”

Black churches, in other words, have obviously tackled the crisis in education by providing an increasing number of opportunities.

Lula Rogers, a retired Portsmouth City Schools educator and a lifetime member of the historic First Baptist-Bute Street, paused to consider how things have changed.

“If I compared the educational programs today to the ones that existed in the church when I was a child, I would say first of all that we did not have a lot of people with versatile educational training,” said Rogers, who also serves as the historian at the historic First Baptist-Bute Street.”

Rogers added, “We didn’t have anyone to offer tutoring classes. And although we had an evening service,” she said referring to the recently launched youth-only worship service that meets on Sunday evenings. “When I was growing up, the evening worship service was for adults only. Now we have an evening service that is only for our youth. Now we also have children’s church.”

Rogers continued to compare and contrast the past and the future. “In the past, children had to sit in the pews with their parents. Now, the children participate in our weekly worship service on Sunday. They recite Bible passages they have memorized. The pastor talks to them. Then, they go to a classroom in the back of the church and have their own lesson. We also have started a special group for tots. Before, if you had a baby on your shoulder during service – well, that’s the way things were – sometimes they cried during service. But that has changed. Our pastor said he likes to hear crying babies because it is a sign of growth. Now we have a special program for tots.”

But the new educational opportunities did not come out of thin air, “We did a survey with the congregation about five years ago and found that our congregation wants to offer holistic educational programs,” said Bruce Williams, who heads A. Bruce Williams and Associates, a local public relations firm. He has been a member of First Baptist for over 15 years.

The congregants used the results from the survey to compile a five-year plan. Among other things, the survey showed congregants should develop new programs for those ages 20-35. Soon, the church launched its Youth and Millennials campus in an adjacent building, in addition to providing a weekly alternative worship service that meets each Sunday at 6 p.m. The effort also includes social media instruction, intergenerational interaction opportunities, pizza parties, social events, and streaming video services.

“Teaching the three R’s (reading, writing and arithmetic) is still a priority, “Williams explained. “But we’ve expanded so that we now offer educational programs to six generations. For example, we offer prostate cancer seminars, a counseling center, a cancer survivor ministry, exercise classes, and even programs on HIV-AIDs. We also have a financial seminar that started this summer to help people get out of debt.”

Williams pointed to other ongoing efforts, “We also feed the homeless (about 25-200) people very Saturday at noon. We are also offering showers. And we have provided employment for some who were homeless. Every day we grow, change and try to extend our reach and the array of ways we can worship that includes all six generations we strive to serve. It ain’t easy.”
Amanda Murray added, “There are times that we just do what we do because we love the Lord and this is what He told us to do.”