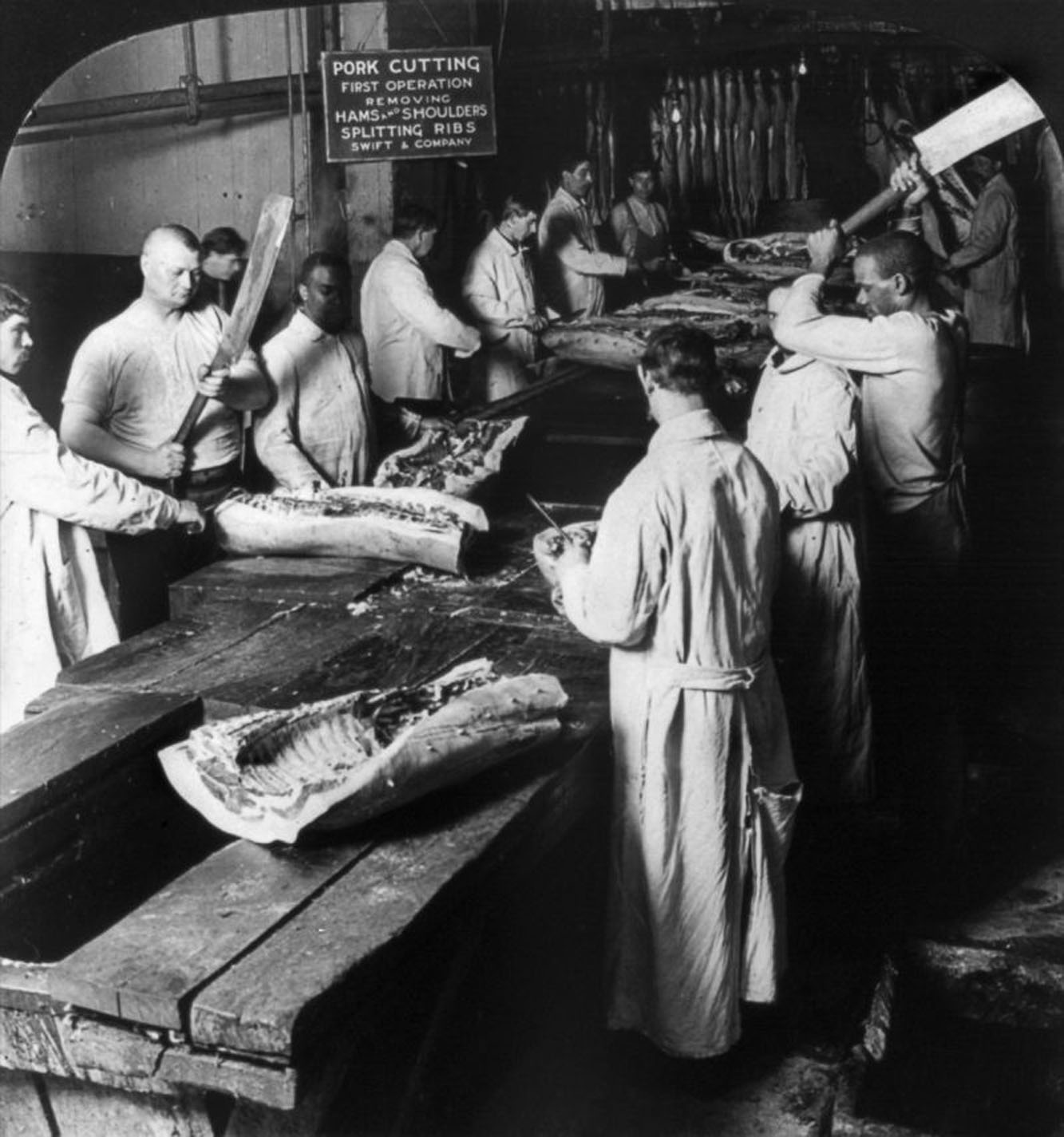 Before Congress passed the 1906 Pure Food and Drug Act, blood, filth and spit were common sights in slaughterhouses – like rats. “There would be meat that had tumbled out on the floor, in the dirt and sawdust, where the workers had tramped and spit,“ Upton Sinclair wrote in The Jungle. His 1906 bestseller was so disturbing that it pushed President Theodore Roosevelt to urge Congress to enact the new law before it adjourned on June 30, 1906, according to the FDA website.

“There would be meat stored in great piles in rooms; and the water from leaky roofs would drip over it, and thousands of rats would race about on it,” Sinclair continued. “It was too dark in these storage places to see well, but a man could run his hand over these piles of meat and sweep off handfuls of the dried dung of rats. Packers would put poison bread out for them; they would die, and then rats, bread, and meat would go in the hoppers together.“

Sinclair’s graphic bestseller not only describes widely accepted practices in the meat-packing industry. His book also spoke out for exploited immigrants who held low-paying jobs in slaughterhouses. In today’s world, we can make a comparison.

As gruesome scenes in Sinclair’s book finally helped to change the law at the turn of the century, an increasing number of graphic cellphone and dash-cam videos may achieve the same feat to address the manner of police-civilian encounters. Specifically, the number of police shootings in July climbed to 855 people, according to The Guardian – or 715 people, according to The Washington Post. Most were unarmed, mentally ill and people of color. More alarming than the increased numbers of killings are the number of police officers who have received minor to no punishment, the Guardian noted.

Equally alarming is the number of police officers who are ignoring standard operating procedures: More police officers are firing into cars, using Tasers, and hiding behind ‘suicide by cop killings,’ the Guardian noted on its website. And the bond between police and prosecutors is impeding justice. While the 1906 law cleaned up foul-bloody slaughterhouses and ended abusive practices in the food and drug industry, would new legislation on police conduct launch a federal office (like, say, the FDA)? Roosevelt signed into law a bill that launched the Food and Drug Administration.

It is the FDA which enforces the Federal Food, Drug, and Cosmetic Act that protects and promotes public health by regulating and monitoring the production and sale of food and drugs. Yet, so far, no lawmaker has proposed legislation that would protect minorities from police misconduct. Recently the NAACP Legal Defense Fund rolled up its sleeves and tackled the escalating issue. The NAACP urged Congress to “withhold federal funds from local police departments that use abusive practices.” Or as President Theodore Roosevelt famously said, urging Congress to sign the 1906 bill into law before it adjourned, “Do what you can, with what you have, where you are.”

The point is the NAACP is arguing there is already a law that will curtail police brutality. Title VI of the Civil Rights Act compelled school districts to begin desegregating in the 1960s. Sherrilyn Ifill, lead counsel said in a recent statement on the NAACP website: “Especially in the North, where desegregation was largely driven by the fear that districts would become ineligible for critical government funds.“

Ifill said, “Unfortunately, federal legislation creating police grant programs includes language purporting to exempt them from obligations that might threaten funding. This loophole should be closed immediately. No state or local agency should be allowed to make an end run around the obligations against racial inequality in our hard-won federal civil rights laws.”

Ifill pointed to how the federal government has already provided at least $2 billion to police departments nationwide. Tulsa has received $14 million since 2010. Charlotte has received $4 million, while larger jurisdictions such as The Chicago Police Department have received $40 million since 2010. “The public is fast losing confidence in the integrity of the rule of law as applied to police who kill,“ Ifill said, speaking in a Sept. 22 op/ed in the Washington Post. The increasing number of videos that show African-Americans being killed by police is a “nightmare,” she added.

Is history repeating itself? You, decide. But history shows several decisive steps ultimately ended abusive practices in the meat-packing and drug industries. First, there were reports of widespread abuses in the meat-packing industry. Next, Sinclair went underground to write his graphic bestseller. Third, Roosevelt read it. Fourth, Roosevelt urged Congress to sign the bill. The rest is history.

History clearly shows the law’s impact. Specifically, the sale of patent medicines containing opiates decreased by 33 percent after the bill was passed. Misbranded food and drugs could no longer be sold nationally or internationally. Offending products could be seized and condemned. Offending persons could be fined and jailed. For the first time, the manufacture, sale or transportation of poisonous patent medicines was prohibited.

Or as Roosevelt famously said, “Walk softly and carry a big stick.” The point is like several decisive steps slowly cleaned up the food and drug industry, an increasing number of disturbing cellphone and dash-cam videos are pushing more celebrities and public officials to speak out against police brutality.

One example is Harry Belafonte’s new public service announcement, “Against the Wall.“ Several men stand with their hands up against concrete while actual news footage of police related shootings plays in the background. The cast includes several notable figures, including actor Michael B. Jordan, Danny Glover, Van Jones and Marc Lamont Hill. Belafonte said of his new short film, “When you have a large population of murdered young men in the streets of America, and they’re all Black or of African-American descent. . .We should respond to that message.“

Recently, the Department of Justice took a step that aims to manage police conduct. The DOJ will start collecting nationwide data early next year on police shootings and other violent encounters with the public. The DOJ announcement follows a series of deadly shootings, public protests and investigations since 2014. According to The New York Times, the Justice Department will gather more data on the use of force by federal agents and help local departments report information on a wider range of police encounters.

But a number of the reporting steps will rely on local police officials to voluntarily submit data, and some civil rights advocates said the Justice Department had not made clear how it would impose financial penalties set by Congress to encourage the reporting of police shootings. “I can’t believe two years into this crisis that we’re still having conversations about data,” said Kanya Bennett, a lawyer in Washington for the American Civil Liberties Union, which met with the Justice Department to discuss the plan.