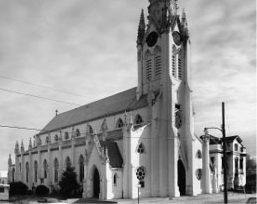 As parishioners in the Church of Saint Mary of the Immaculate Conception strain to raise the $2 million needed to renovate a 158-year-old building; some things are obvious: tall scaffolds, dust bunnies, and rotting wood. What is less obvious is the sense of well-being that strains to rises amid the chaos. This means that as construction workers slowly repair the church’s historic steeple, replace plaster, remove rotting beams, and repair stained-glass windows, parishioners in the soup kitchen calmly spoon meat, potatoes, and vegetables onto about 1,000 plates each month and pass them on.

Meanwhile parishioners in the food pantry drop free food into sacks and pass them on. And the church’s praise dancers, who warm hearts during worship services, also coax smiles from residents in the Hampton Veteran’s Administration Medical Center, and Ballentine Assisted Living Center. “Not only is the building experiencing a makeover, so are the parishioners,” said Ronda Frazier, 61, who tirelessly serves in the church, like her mother, Barbara Battle who passed in 1997, and her grandmother Audrey Willis, who passed at age 97 in 2006.

“Both (the building and the parishioners) are undergoing a makeover,” Frazier said, describing the patient and adaptable mindset most parishioners have adopted inside of the only African-American basilica in the country. “A lot of the activities that we would normally have we cannot schedule because of the ongoing construction, said Frazier who was baptized as an infant in the parish located at 232 Chapel St. in downtown Norfolk. “Say, for example, the women’s ministry wants to raise money by having a luncheon or a fashion show.”

Of the ongoing construction project in the oldest Roman Catholic parish in the Diocese of Richmond, Frazier sighed softly. “But you cannot plan (some activities) because of the construction that is going on now. And you may have to cancel events you’ve already planned. For example, I used to love to sit up in the balcony. Now no one is allowed up there until they get the repairs done. There are scaffolds all over the church. You are conscious of them being there even though we are told not to look at them. I try to keep my eyes closed in worship anyway.”

The point is ongoing challenges are not new to the Church of Saint Mary of the Immaculate Conception, or to Frazier, who married in 1984, separated about nine years later, but has four adult children, ages 29 to 45, who are all Old Dominion University graduates and employed. “The thing we have to remember is God is in control,” Frazier said, pointing to challenges in the parish – and in her own personal life. “One thing about St. Mary’s is we are a praying, hard-believing, know-God-is-in-control people. And, this too shall pass. It will be done.”

In a sense, Frazier’s life mirrors the challenges in the parish. Wedged between a public housing project, tight busy downtown streets, and a restored neighborhood, it was built in downtown Norfolk around 1842 by French Catholics fleeing the French Revolution. The parish began in 1791 as Saint Patrick Church. Here, the plot thickens, as the saying goes. French immigrants built the first edifice in 1842, which was about two decades before slavery ended in 1865. Soon, the large imposing building opened its doors to parishioners of color. Some objected to interracial worship services. And according to local legend, many parishioners still believe the parish was deliberately set ablaze and destroyed by fire in 1856 for that reason. But the parishioners were resilient and bounced back.

From 1854-1858, parishioners rebuilt, rededicated, and renamed the parish, Blessed Virgin Mary of Immaculate Conception. “I believe it is God’s will to make it an even more beautiful church because the people inside of it are beautiful,” said Frazier, who often arrives at parish meals with fried cabbage similar to the dish her grandmother whipped up with green peppers, onions, bacon fat, red peppers and bacon.

“But I use olive oil instead of bacon fat,” Frazier said, laughing, explaining how she upgraded a still-popular dish that was made by her grandmother, who was born in 1909. “People are always asking me to bring it. My grandmother used to bring it to church to share at various events. She was always doing something – always involved. That is why I am so involved.”
The point is this. As parishioners work to raise $2 million to upgrade the historic church, Frazier and her family bring St. Mary’s challenges sharply into focus. Specifically, the parish that aimed to produce a sense of well-being in parishioners and the surrounding community in challenging times continues to cling to its notable mission.

“When I was there as a child, the church was thriving,” said Frazier’s daughter, ReVae Goodwyn, 31. “There were so many activities for all ages and generations. We were as involved in the community as we are now. It was very personal then and now.” Goodwyn may work 40 hours a week at a full-time job, like her great-grandmother, grandmother, and mother – but all three also volunteered in the parish. Goodwyn, who is a fourth generation Catholic spends about 15 hours a week volunteering in several ministries including the youth choir, youth ministry, women’s ministry, and Ladies of the Covenant Praise Dancers.

“I would describe our vision as putting God first,” Goodwyn said, comparing and contrasting St. Mary’s past and present. “In doing so, we continue to serve the family and the community. In the 1950s, the challenge was Jim Crow. Now we have social injustice. And the church continues to change with the times.” Goodwyn, who has seen five priests enter and exit the parish since she was baptized as an infant about three decades ago, pointed to another comparison. “Then, no one was afraid to go to confession. Now some do not always want to share their personal experiences.”

Frazier’s granddaughter, JaNae Brown, 17, said the parish instills a sense of well-being in her by being tight knit, personable, and compassionate. “The people here are like family,” said Brown, a senior and a cheerleader at Booker T. Washington High School. “Here, I have learned lessons, or avoided mistakes I’ve seen made by others around me,” Brown said. “The biggest lesson I have learned is to be a leader. Often when I was younger I was a follower.”

Whether a Sunday school class hones her leadership skills while she leads prayer or teaches class, or her spiritual beliefs make her walk away from a fight at school, studies show religious involvement increases comfort, coping, and insight – A sense of well-being in other words. For example, a 2002 study showed belief-based behaviors reduce alcoholism, drug use, cigarette smoking, risky sexual activity, failure to wear seat belts, and drinking while driving in young adults. And, a recent study by the Pew Research Center showed that only about four-in-ten Millennials say religion is very important in their lives, compared to seven in ten baby boomers.

But, Brown, a fifth generation Catholic said, “I have avoided a lot of conflicts at school because of my beliefs.” Brown pointed to more examples. “Say I see an argument starting. I walk away and take myself out of it, to avoid it getting worse. Or like my grandma (Ronda Frazier) says, ‘Just pray on it and leave it alone:’ I do.” Describing the impact that her Catholic beliefs have on her sense of well-being, Brown said, “When I was younger I didn’t take church seriously. I didn’t pay attention in Mass. I would sit there quietly but not take it in. I was about 14 when I began to understand and apply it to my real life. I feel I will be more prepared in college because it will guide and direct me to make smart decisions.”

Yes, negative peer pressure exists, Brown acknowledged. “Yes – I have been in situations where I have been tested,” she said. “If God was not in my life, and I did not believe in him, it would make me a totally different person. It is sometimes hard to refrain from doing stuff my friends want me do. But I choose my friends carefully because they have a huge impact on my character.”
Next Week – Straining to Soar – Part Two