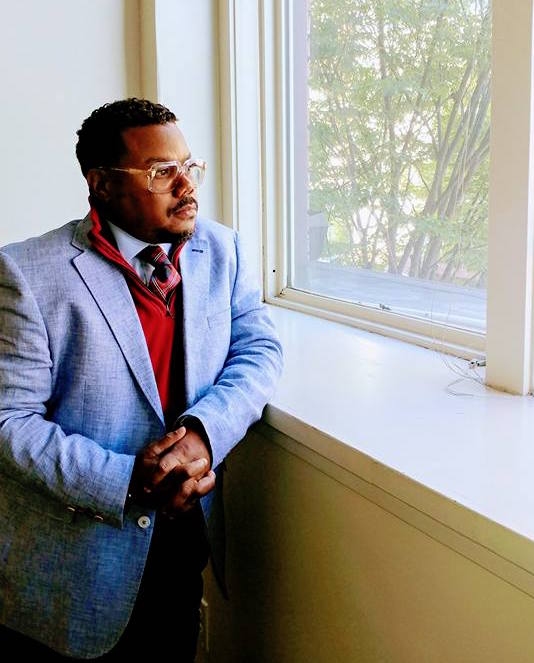 David Hyman grew up fiddling around with cameras, electronic gear, and music but saw the big picture after his father urged him to take the next step.

The next step was a vacant building on Granby Street. For the past two years, Hyman has worked among a handful of minority merchants who ply their trade in Norfolk’s well-known business district. Hyman operates NITAJ Multimedia LLC, 259 Granby St. His business offers publishing, music production, photography, and video production He named his business NITAJ (pronounced Neetaj) after his three children, Nicholas, Tahira, and Jordan.

“One day I asked my father, ‘Why did God bless me with all of this talent?’” His father replied, “‘It is not for you, it’s for the community.’ That changed my life and I realized I had to take everything I have and help the community. This is the core of my business.”

The son is following a huge set of footprints. Before his father, Iman Vernon M. Fareed, passed away at age 63 on Sept. 12, he had already taken the advice he passed on to his son.

For example, in 2005 Imam Fareed became the first Muslim of African-American descent to offer the invocation for the Virginia State Senate, according to The History Makers, an online biographical service. His father was the manager and president of Salaam Investment Group LLC. He served in a Mosque that served more than 6,000 Muslims in Hampton Roads.

A member of the Virginia Center for Inclusive Communities since 2000, his father received many awards during his lifetime including the VCIC’s National Humanitarian Award in 2006. His father also served on many boards including the Ministers Advisory Committee to Norfolk’s Police Chief. He was the author of a 2008 book titled Uniformity in Prayer. Most recently, his father was awarded the New Journal and Guide’s Impacting Lives Award posthumously.

“My father inspired me to open my own business,” Hyman said. “I was trained in photography and I am currently being trained in movie production. As for music and publishing, there is more talent than training in regards to those skill sets. I have certifications in various genres that complement all of these skills. Up until now I was doing business on a smaller scale. I did not have a physical location. But upon moving to my current location, business has grown 75 percent.”

Multiple studies show this is a great time for a person of color to open a business. Black buying power amounts to more than $1.3 million, according to a report by Nielson and Essence. Meanwhile, a study by the Kellogg School of Management at Northwestern University found that more merchants of color could create between half a million and a million jobs by launching a business. Black female business owners are already doing so since this sector increased by 322 percent in 2015, the largest increase since 1997, according to a report by American Express Open.

Black women control 14 percent of the nation’s estimated 9.4 million firms. These businesses have added an estimated 340,000 jobs to the economy since 2007. Black consumers also comprise the largest consumers of color sector, according to a report by the University of Georgia’s Selig Center for Economic Growth. That trend will continue as the country becomes more diverse, driven in part by growth in immigration from the Caribbean and Africa.

Hyman has read some of the studies. And he is using several strategies to expand his own business. But his eye is on developing strong partnerships. “I look for partnerships where I can help other companies achieve their goals. I look for opportunities to create long-term relationships with companies. I do not focus on achieving high profits from the onset I temper my prices in order to establish a long-term business partnership.”

Specifically, Hyman and his two employees provide specialized marketing services to small businesses and non-profits. In others words, there is no need to shop all over town if you are planning a special event, planning a fundraiser, or aim to increase sales, he said. “We are a one stop marketing shop. There is no reason to subcontract which saves on the bottom line for all. We have been met with elation once we’ve explained the concept to the client.”

Although NITAJ Multimedia hit the ground running two years ago, it has still encountered challenges that are common in startups.

“My biggest challenge at the moment is convincing my partners I am real,” Hyman said. “They are very surprised at how I have set my prices in order to introduce them to my company. But once they realize I am real and I am sticking to what I have presented I am received with open arms. My other challenge is finding people I can work with that share in my love of doing business while helping the community.”

Hyman aims to add more positions and offer intern opportunities. He wants to provide training opportunities. “This allows us to directly help those in the community who would like to open a business but don’t know where to start,” he said.

Hyman is delighted that his father nudged him to take the next step. But he is preparing to move forward. “Our next goal is to grow this business so that we can speak in terms of having a market share in the region,” he said.

Hyman is also planning a Black History Month Celebration for February. It will celebrate the accomplishments of four generations. “This event was inspired by my father and a speech he was never able to give. For this one night, we are going to celebrate all of the progress we as minorities have accomplished nationally and locally. The goal is to get everyone to reevaluate their commitment to celebrating the progress and fully utilizing the power we have to help the community at large.”