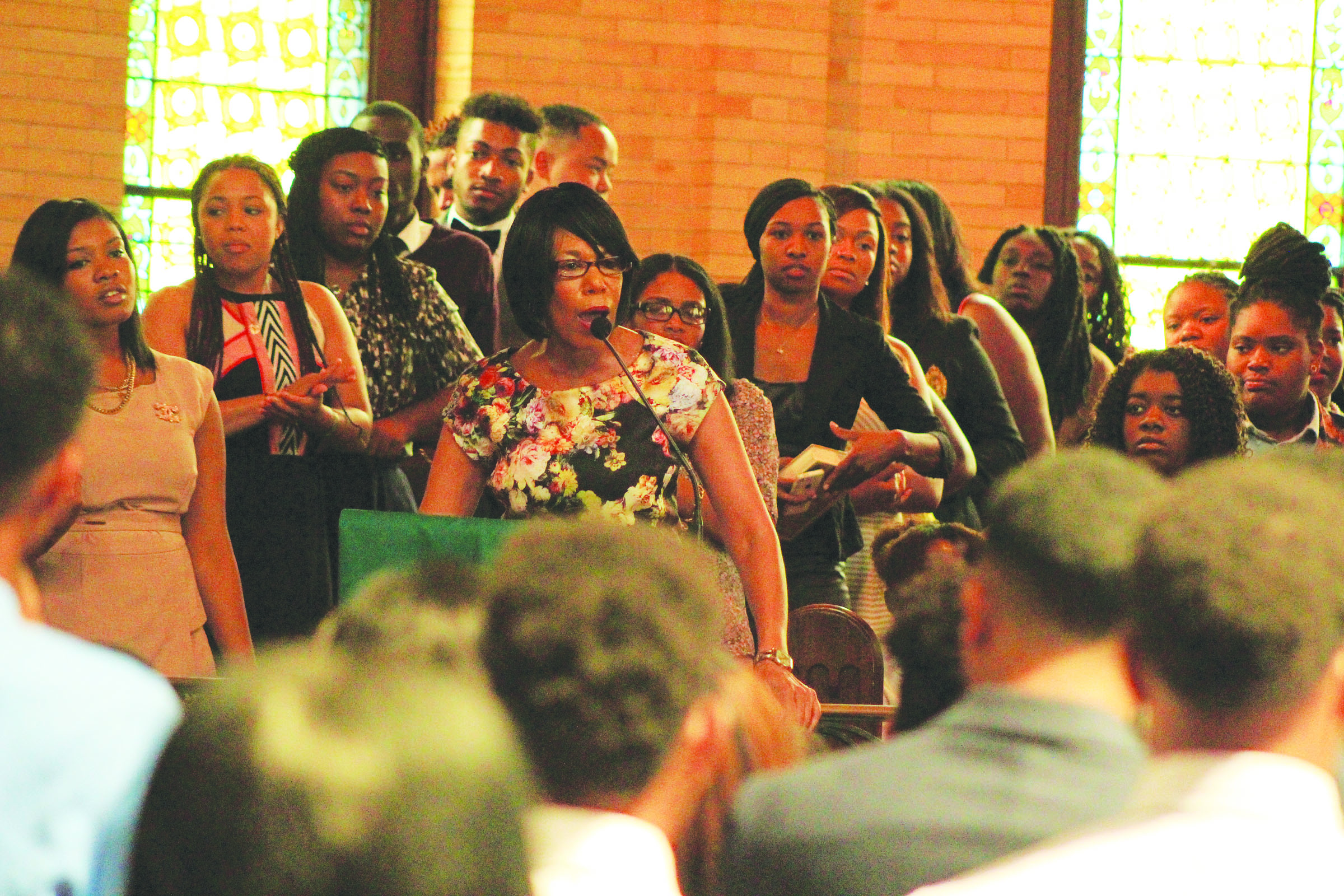 The Old Testament’s Book of Judges, (Chapters 4 and 5) reveals the story of the Priestess Deborah who held the office of Judge, tasked with helping Moses resolve disputes among the Hebrews under the shade of a palm tree. Outside the tradition of culture, Deborah was allowed to assert authority, summoning the Israeli warrior Barak to lead 10,000 troops up to Mount Tabor to confront and conquer enemy troops.

So it is no surprise that Deborah is the Biblical role model of the Reverend Debra L. Haggins. In 2008, for the first time in its then 140-year history, Rev. Haggins was named the first female Chaplain of Hampton University. Each Sunday morning at the school’s Memorial Church, she presides over a congregation of mostly 300 or more students, who not only worship, but also serve as assistant pastor and in other roles.

She is also director of the Religious Studies Program and serves as the official spiritual voice at major school events. Further, Haggins is the first female Executive Director of the annual HU Ministers’ Conference, the largest gathering of interdenominational African-American clergy in the world of its kind. “The addition of Rev. Haggins to our Hampton family is no doubt a historic measure in our institution’s rich history,” said HU President Dr. William Harvey, on her selection. Yet my decision to select her was based on her values and skills as a pastor and spiritual leader which she will bring to the HU community,” “She exemplifies the ideals that Hampton University was built upon and I have only the utmost confidence that she will serve as a pillar of faith and leadership to our university.” Before she was called to serve as Chaplain at HU, Haggins was the interim pastor of the historic Queen Street Baptist Church. She was also associate minister and director of the women’s ministry at Mount Gilead Missionary Baptist Church. Both churches are located in Norfolk.

During a recent interview with the Guide, Haggins said HU leadership, especially its President, Dr. William Harvey, has been supportive and welcoming and “has let me know it.” Haggins, a skilled diplomat, said she has to apply those skills, as she walks a “tight-rope” seeking to apply her leadership shills (skills) in an organization which still holds firm to the tradition of being a male-centered institution.

Haggins admits that she has noted subtle signs of resistance from some of the male leaders in the century-old conference and the church, in general. But she and other women in the clergy, she noticed, have not allowed tradition to deter them from exercising their role as leaders of the church or aspirants to pulpit.

“We (women) sit in the classroom and are taught the same skills,” said Haggins. “This means we should be granted the same respect and wages. My view of respect is …do not see my gender and prejudge my skills…wait until we interact, see how I apply my skills and then apply your judgment ). “This is why I chose Deborah as my role model,” said Haggins. “She was in a non-traditional role…a female judge in Biblical times. She was also married and people respected her for her wisdom and strength.”

Haggins received a Master of Science in Secondary School Administration and the Certificate of Advanced Graduate Studies from Old Dominion University. She earned a Master of Divinity in Theology degree from the Samuel DeWitt Proctor School of Theology at Virginia Union University and is currently pursuing the Doctorate of Philosophy Degree in Educational Management from Hampton University.

“It is an honor and I am proud to deliver the word of God,” said Haggins. “He (God) could have chosen anyone else to deliver his word. I do not get into arguments about whether women should preach. This opportunity is provided by God … He chooses.” Haggins said that apart from her work with the conference and providing the spiritual voice of HU during important ceremonies, serving as the campus pastor of the school’s historic Memorial Chapel is equally fulfilling.

“Our church is a model for other campus ministries,” she said. “It is making an impact. These students enjoy the services because they are looking for relevance in the church today.” “They are asking ‘how does it fit into my life and world, which is so unstable,’” she continued. “They are asking ‘how can Christ stabilize my life?’ They are looking for relevance in the sermons and the music and how to apply it outside the church. I teach to the context of their lives, at this point (in their lives) when they do not have mortgages … but they want to know Jesus and the church better.” Haggins said that if she had not been chosen for a role in the church, she would be in education, preferably, the superintendent of a large urban school district, because of her “love for children and passion for nurturing.”

She said her mother was a church musician and her grandmother was a deaconess in her family church back in Georgia. “I have been in church since I was 6 weeks old … and rarely missed a Sunday,” she said fondly. “Women in leadership in the church are still undergoing a natural evolution,” said Haggins, a native of Millen, Georgia. “I am in a field which is still a male-dominated field. It still looks to men for leadership authority. Women, according to its tradition, have been told to keep silent in the church. But things are changing.” “Jesus came to the earth through the womb of a woman,” said Haggins. “If women are good enough to carry the Savior in their wombs … we are good enough to carry the Word of His church