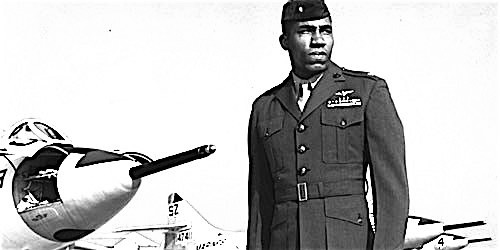 Lt. Gen. Frank E. Petersen Jr. was only 20 when he strapped himself into a single-seat, single-engine, blade-propelled Corsair, and headed for the clouds on his first combat mission for the U.S. Marine Corps in 1953.

Ten years older than Christopher Columbus who went to sea at age 10, Petersen was changing history, like Columbus who famously said, “Following the light of the sun we left the old world.”

In a sense, this is what Peterson did after he joined the Marine Corps in 1952, flew 350 combat missions in Korea and later in Vietnam, where he was decorated with the Purple Heart after his plane was shot down over the demilitarized zone. In other words, following the light of his own ambitions he left the old-dark world of Jim Crow behind.

When President Jimmy Carter nominated Peterson for the rank of brigadier general in 1979, the Army had 21 Black generals on active duty and the Air Force had seven, according to news reports. The Navy had three Black admirals. Petersen was head of the Marine Corps Combat Development Command in Quantico, Va., when he retired in 1988.

To succeed, decide on a goal and stick to it, Lt. Gen. Frank E. Petersen said in a May 1979 interview in Marine Corps Association and Foundation, “Decide on an objective and direct all your efforts towards that goal. Don’t let anything at all detract you from that goal; let nothing stand in your way or detain you from achieving whatever it is.”

Guided by the light of his own ambitions, in other words, Petersen did not magically leave the old dark world of Jim Crow behind. Bus drivers ordered him to the back of the coach, and he was barred from sitting with white cadets in restaurants and movie theaters. He largely swallowed the treatment, he later told The Washington Post, because he could not fight two battles at once. ‘‘I knew that I couldn’t win if I were to tackle that, as opposed to getting my wings,’’ he said.

His son, Frank E. Petersen III, said he saw his father face bigotry head on. “I remember once a man refused to salute dad. Dad said, ‘listen, if you don’t want to salute me, that’s fine. But if I take off this uniform would you at least salute the uniform?’ The barriers that dad faced, he always said, ‘son, no matter how difficult the challenge, there’s always somebody out there that’s going to do the right thing.”

Driven to excel, Petersen soared above bigotry and changed the world. Asked, “What in your career as a Marine would you change if you had it to do over again? „Not a thing; not a damned thing. The drama or the trauma … I wouldn‘t change a thing,“ the three star general said in his May 1979 interview in Marine Corps Association and Foundation.

He retired in 1988, became vice president of DuPont Co. and was a guest speaker at many institutions before he passed away from lung cancer on Aug. 25, 2015 at age 83.

“When I came in, there were no Black aviators, let alone Black officers,” Petersen explained. The young Black entering the military today has the opportunity to stay on track and make a career without limitations.”

This does not mean the old world of Jim Crow magically vanished. After all, Petersen joined the Navy in June 1950 as a seaman apprentice and the next year entered the Naval Aviation Cadet Program.

This means his military career began around the time that President Harry S. Truman ordered the armed forces to desegregate in 1948. Petersen later wrote that the Navy and Marine Corps were “the last to even entertain the idea of integrating their forces.” And whenever he left the flight-training base in Pensacola, Fla., he was subjected to the indignities of the Jim Crow South, he wrote in his 1998 memoir, “Into the Tiger’s Jaw,” written with J. Alfred Phelps.

The Washington Post asked Gen. Petersen in a 1988 interview if his military career had real impact for African-Americans.

“As much as I would like to philosophize and say that it hasn’t,” he said, “it has made a difference.”

Systematically Petersen left the old world behind by following his own star. He earned a bachelor’s degree in 1967 and a master’s in international affairs in 1973, both from George Washington University.

The year after Petersen died, Secretary of the Navy Ray Mabus announced that the destroyer, which is under construction, would bear the name of Lt. Gen. Frank E. Petersen Jr.

Secretary Mabus said at the ship-naming ceremony, which was held in Cherry Point, N.C., on Nov. 9, 2016, about a year after Petersen’s death, “The courage and perseverance of Lt. Gen. Petersen throughout his distinguished and groundbreaking career makes him especially deserving of this honor,” Mabus said, in the Topeka Capital-Journal.

“Those who serve aboard DDG 121 will, for decades, carry on the storied legacy of this Marine Corps hero.”

The vessel is expected to enter the Navy fleet in 2020. The ship will be 509 feet long, have a beam length of 59 feet, and be capable of operating at speeds of more than 30 knots. The ship-naming ceremony was held in Cherry Point, NC., the location General Petersen took over as his very first command.

This means that while racial segregation was the law of the land when Petersen finished Topeka High School in 1949, completed flight training in 1951, and became the first African-American to enter the U.S. Marine Corps as an aviation officer, systematically, he changed history.

Assigned initially to Air Station El Toro in California, a major airfield with four runways where all U.S. Presidents in the post-World War II era landed in Air Force before it was decommissioned in 1999, Peterson changed history the old-fashioned way. He worked at it. Leaving Air Station El Toro, he headed to his next assignment. In Korea in 1953, he flew his first mission at age 20. In October 1952, he received both his wings and commission at Pensacola, Fla.

He was unaware that he was destined to become the first African-American three-star general in the Marine Corp., have a ship named in his honor, or that President Barack Obama would appoint him to the Board of Visitors at the U.S. Naval Academy in 2010.

Peterson changed history all of his life. The Topeka High School Historical Society inducted Frank Petersen into its Hall of Fame in 1986-87.

He recalled the years after his return from Korea, when he continued to face vicious discrimination. He said he wore his uniform everywhere, figuring that if anyone attacked him, it would be a federal offense.

“Platoons that were 80 percent minority were being led by lieutenants from Yale who had never dealt with ghetto Blacks,” he told The Washington Post in 1990. “Soldiers were angry. Martin Luther King was killed. It all came together. It was a mess.”