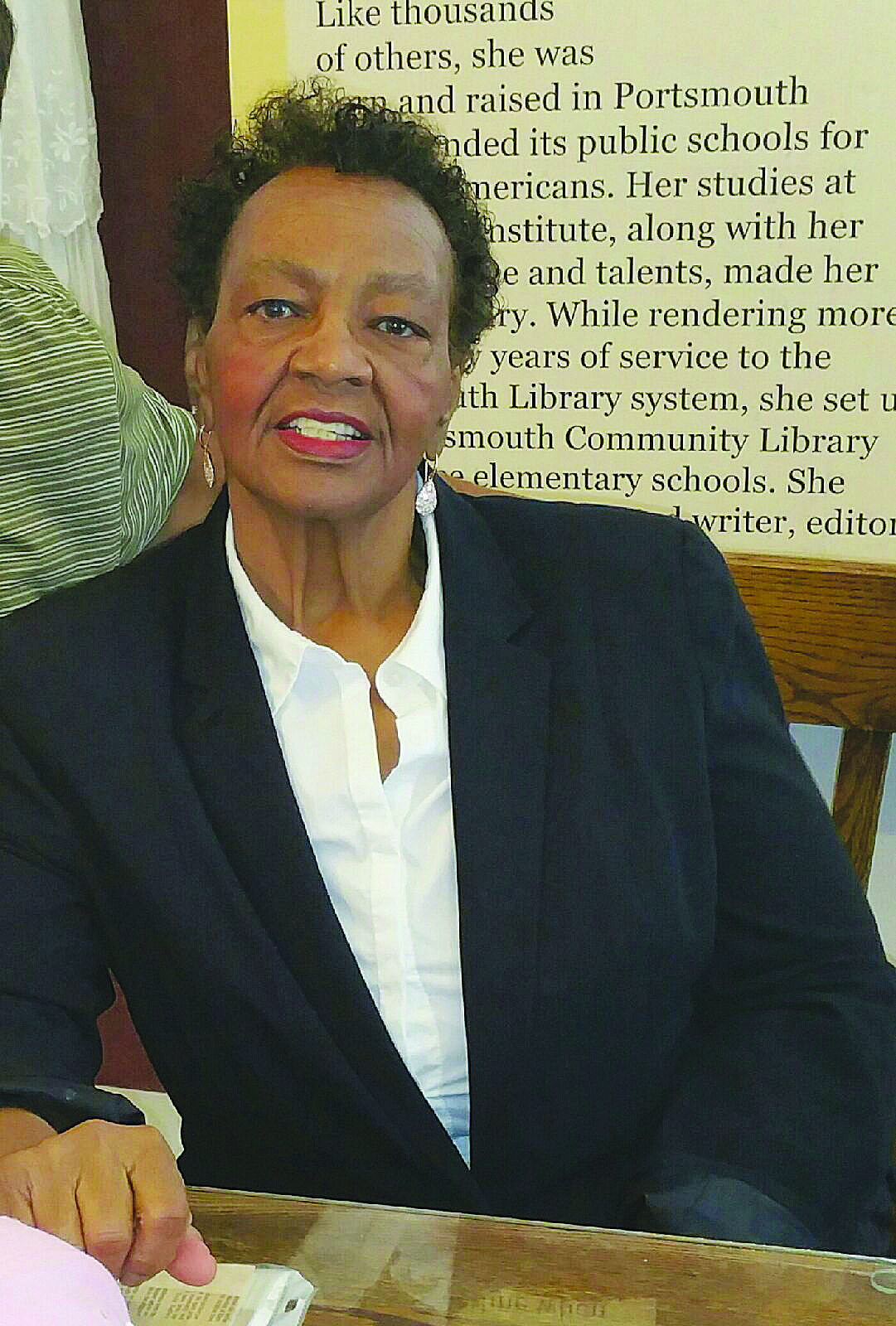 The theme for the 2016 edition of Black History Month (BHM)) is Hallowed Grounds: Sites of African-American Memories.

After 263 years, the historic fingerprints and the civic and cultural contributions of Black people are very prominent in the historical landscape of the City of Portsmouth, Virginia.
Before Emancipation, the craftsmanship, muscles and hands of free and enslaved Black men and women contributed to building the city’s early infrastructure, homes and industrial base.

There is no doubt that many of the old – historic – homes, business buildings and other “hallowed” structures in the city owe their birth to Blacks. They either contributed to building them with nail and hammer or generated the wealth which paid for them from their toiling in the fields or factory.
Slavery, nor Jim Crow, deterred Blacks from building their own churches, neighborhoods, businesses and schools to pursue their vision of the American Dream.

Today these sites are increasingly being recognized as sacred and hallowed examples of how visionary Blacks created places of their own.
Jim Crow sought to limit Black vision, but it did not restrict the Black community’s energy and pride – the source of their enterprise and empowerment.

Instead of a restrained minority, Portsmouth’s Black population today is now in the majority and is seeking to sustain and revive the city economically with White citizens and others who share their vision.
Even the now demolished public housing communities, such as Ida Barbour are claimed as hallowed grounds, by the likes of Nathan McCall, a journalist who wrote his bio, “Makes Me Wanna Holler” chronicling his life living in downtown Portsmouth. He and others left the pockets of poverty to become teachers, doctors, lawyers, politicians and community leaders.

Mae Breckenridge-Haywood is the chair of the African-American Historical Society of Portsmouth.
She and her organization have done extensive research on the city’s history and have compiled a roster of sites where historic businesses, educational, medical, and cultural sites built by Black people still stand or once did.
The Society, with the help of the city, reclaimed the old “Colored Community Library” building which once stood at Effingham and South Streets before it was moved to the Ebenezer Baptist Church’s parking lot.
When a court mandate forced the integration of the Portsmouth Public Library, the city shut down the Community Library in 1964 which Blacks had raised money to build in 1945.

Instead of being demolished, the Society worked to move the library to its current location on Elm Street where it houses artifacts related to the history of the city’s Black community.
“Many of these sites are sacred or hallowed because of their sentimental value to the people who remember them, touched and saw them,” said Haywood, “Historians are the only ones who want to recall and reclaim them. A lot of our history was painful, but there a larger portion of our past that was about what we built, taught and used to show that we could value the American dream too.”

The current I. C. Norcom High School which now sits on Portsmouth’s London Boulevard opened its doors in 1998.
But the school’s legacy is 103-years-old. It was first known as the High Street School, and opened in 1913 as the first high school for Black students in the True Reformers Building at 915 High Street.
After World War I, it was moved to the corner of Chestnut and South Streets. A building on Turnpike Road opened in February, 1953.

Renamed I. C. Norcom in 1953, it carried the name of the first supervising principal, Israel Charles Norcom (1856–1916).
Other historic Black high schools were closed or converted to other uses when segregation was ended in the early 1970s. But Norcom and Norfolk’s Booker T. Washington are the only two in this region to retain their heritage and tradition. In Portsmouth are some of the oldest churches in the region.
Built before and after the Civil War, historical Black Portsmouth churches include Emanuel AME Church, Zion Baptist Church, Ebenezer Baptist Church, Third Baptist, St. James Episcopal and Mt. Herman Baptist Churches.
The city’s hallowed grounds also include its graveyards which served Blacks during segregation such as the grounds of Mt. Calvary and Mt. Olive, Fisher Hill and the Potters Field Cemeteries.

The Lincolnsville neighborhood, established following the Civil War is the home of Emanuel AME Church and was a station on the Underground Railroad.
While little remains of historic Lincolnsville, the Truxton community does which was built as a federal model community to house shipyard workers.
Linda Holmes is the Supervisor of the Portsmouth Colored Library Museum which is part of the Portsmouth Department of Museums.

Many southern cities with large Black populations and long-standing business corridors have either totally disappeared or can no longer be recognized as a base for Black enterprise and culture.
The Church Street business section of Norfolk is one of those corridors. Today it is mostly residential.
“They call it urban renewal, but many Blacks call it Urban Negro Removal,” said Holmes. “Now is the time to influence community leaders to unite in preserving what is left of the former Black business districts. Otherwise, we risk losing all memory of this important chapter of Black History which was a source of pride for so many for so long.”

According to Holmes, the Mutual Pharmacy Building located in the 600 block of Effingham housed a pharmacy, a soda fountain as well as offices of Black physicians, a dentist and other professionals.
It was built and owned by enterprising Portsmouth Blacks including businessman Bruce Watts and family which had extensive capital investments in the city and Norfolk County. The Watts family built their wealth from land holdings.

Watts founded the Safeway Cab Company, which still exists today, and ran A bus transit in Portsmouth and Norfolk County.
Built in 1945, the Mutual Pharmacy building, or the Jones building is currently located on Effingham and County Streets.

There was no hospital servicing African-Americans in Portsmouth until the l960s.
But behind this building sat a two story building built and run by Dr. Harry Boffman which still stands on County. Black women could stay overnight with their new born babies and receive care when White hospitals refused to care for Black mothers and their babies.
The Capital Theater, once on Effingham, is gone now, but that is where African-Americans watched movies and other and national entertainers.

The Portsmouth bureau of the Journal and Guide made its home at 621 Effingham. John Q. “Rover Reporter” Jordan, ran the shop. He was among the Guide reporters who were highly regarded correspondents covering the exploits of Black soldiers during WWII.

Up until the early 1960s the Guide printed a national, Norfolk, Peninsula, Portsmouth and North Carolina edition of the paper, making it the most widely distributed Black owned publication in the South.
Newly minted dentists Dr. James Holley and Dr. Hugo Owens, in the mid-1950s opened offices in the same building as the Journal and Guide before moving their operations to other parts of the city.

Bailey’s Barbershop, owned by Lynwood Bailey on Effingham and County was a gathering place for civil rights activists promoting change. Bailey joined Owens and Holley in court challenges to desegregate the city’s golf course and other city public facilities.

According to Holmes, Roger Brown’s Restaurant on High Street, once housed the Woolworths Department Store.
It has no historic designation now, but it was the target of I.C. Norcom students and other students in the Tidewater area who organized and conducted sit-ins demanding that Woolworths and other department stores desegregate.

Holmes said student leader Ed Rodman, later an Episcopalian Priest, and other Norcom students received international attention as the first high school in the nation to stage sit-ins in the early 1960s. In Greensboro, North Carolina and in Norfolk, sit-ins were staged by college students.
Nancy Wheeler was a well known business woman who made her fortune running a funeral home at 610 County Street, where the building still stands.

She devoted a lot of resources to charitable and civic causes, including the NAACP. She opened the first licensed nursing home for the aged in the city.

Another woman-owned property in Portsmouth was the Prefix Beauty College owned by Mrs. Marion McGlone. She developed and sold trade products such as McGlone Pressing Oil and McGlone Hair and Scalp Ointment, etc.
Holmes said some remember her as Hampton Roads’ Madam C.J. Walker.

Another notable and industrious community servant was Ida Barbour. Born around 1878 in Portsmouth, she lived with her family in the first free Black section of the city, “Lincolnsville.” After attending the Institute for Colored Youth in Philadelphia, she returned home and worked as a teacher in the Portsmouth Public School system from 1898-1909.

After initially taking in five orphans, Barbour and 20 other women (known as the Women’s League) established the Miller Day Nursery and Home for them and other neighborhood children in 1911.
The Miller Day Nursery, the area’s first daycare to take in infants, continues today.