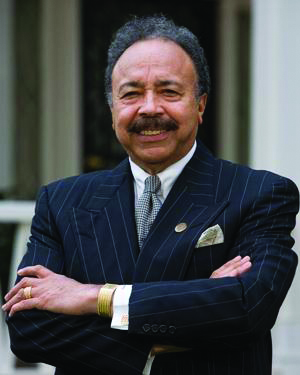 Dr. William R. Harvey did not know he was on the verge of making history the day he flew 728 miles from Tuskegee, Ala. to Hampton Institute, strolled across campus savoring the sweet ocean air, and walked into the boardroom to interview for the job of president in 1978.

“The first thing that struck me was the beauty of the waterfront,” Dr. Harvey said in a recent phone interview, adding his experiences to the series that the New Journal and Guide is writing on Historically Black Colleges and Universities. “It was beautiful. It was the prettiest campus I’d ever seen,” he said.

But the historic school was at a clear crossroads in 1978. While the landmark college that Brig. Gen. Samuel Armstrong launched by the sea on April 1, 1868 as Hampton Normal and Agricultural Institute had surely flourished, undergone several name changes, built 12 new buildings, and increased enrollment to 2,600 by 1969, (which was about a decade before Dr. Harvey was nominated for the post 41 years ago), the path forward was unclear in 1978.

“They were experiencing financial problems,” Dr. Harvey said. “The grandson of the founder who was on the board of trustees had publicly proposed that the institution cease to function as a college and become a preparatory school. Although he had proposed it, no one at the college had agreed to that.”

Dr. Harvey had several other job offers at the time. He was currently serving as the administrative vice president at Tuskegee Institute. He earned a doctoral degree in college administration at Harvard University in 1972. And he had nine years of experience in education that included administrative posts at Harvard, Fisk, and Tuskegee.

”I said if I were elected, I would run Hampton like a business with educational objectives,” he continued. “If I were elected, I would want everything at Hampton to excel. That is what Gen. Armstrong said in a speech before the students and faculty in August 1868. I read that quote from Gen. Armstrong while doing research. He said he wanted everything to excel: academics, athletics, funding, research – everything! I will say I have continued to pursue that goal for 41 years.”

As shapes quickly change forms in a kaleidoscope, history took small steps then bold leaps on campus, after Dr. Harvey was unanimously elected the 12th president of Hampton Institute, which changed its name to Hampton University in 1984. Did Dr. Harvey help to change history at Hampton University? “Let my works speak for me,” he said.

It is impossible to list all of his accomplishments. But during his 41 years at the helm, Hampton has graduated more than 34,000 students, launched 92 new programs, constructed 28 new structures, and increased the endowment from $29 million to $280 million. Student enrollment at Hampton University has increased from approximately 2,700 students to over 6,300, according to campus publications. Moreover, the average SAT score of entering freshmen has increased approximately 300 points. He initiated a university-owned commercial development consisting of a shopping center and 246 two-bedroom apartments.

On July 21, 2007, the school broke ground on the $200 million Hampton University Proton Therapy Institute in Hampton. In September 2010, the independent, free-standing facility billed as the largest of its kind in the world, treated its first patient for prostate cancer. By September 2015, its fifth anniversary, it had treated a total of 1,274 patients, according to news reports.

Six U.S. Presidents of both political parties have appointed Dr. Harvey to national federal boards. “Both Republicans and Democrats,” he added. “I was appointed as chair of three of those boards. My political affiliation is Independent. I am an Independent. I always have been. I have also served on eight major corporate boards.”

When the university celebrated its 150th anniversary and Dr. Harvey’s 40th anniversary in April, hundreds attended including his wife of 51 years, Norma, elected officials, Hampton graduates, students, supporters, and friends. According to the university’s annual report, some of its more visible graduates recently returned and spoke on campus including Oscar-nominated Costume Designer Ruth E. Carter and Comedian Wanda Sykes.

Or as Confucius said of history makers, “Our greatest glory is not in never falling but in rising every time we fall.”

Dr. Harvey reflected on the clear challenges Hampton faced 41 years ago. He smiled and said softly, “But that did not deter me at all. To me, the greatest challenge was to make sure the financial situation became solid again.”