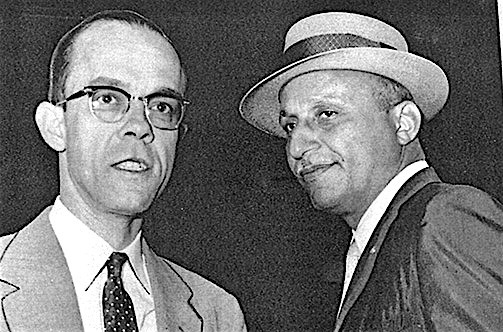 [cs_content][cs_element_section _id=”1″][cs_element_row _id=”2″][cs_element_column _id=”3″][cs_text _order=”0″]The 2018 Black History Month observance, “African-Americans in Times of War,” is highlighting the contributions of soldiers, sailors and marines who fought valiantly in wars overseas to sustain the nation’s freedom at home.

Yet, for African-Americans, freedom at home has been a continual fight waged by slave rebellions, legal battles to reform racist laws, and economic boycotts and protest demonstrations on the streets of America.

While they did not carry carry guns or plot insurrections, Attorneys Oliver Hill and Spottswood Robinson were two Black Virginians who fought their battles in the local, state and federal courtrooms when the nation was at war and at peace.

Their efforts did not extract blood or cause death, but their battles were just as brutal and demanding of their talents, and personal integrity to ensure that the phrase “All Men Are Created Equal” included Black Americans.

Their dual story is now told in a new book, “We Face the Dawn” (University of Virginia Press) written by Journalist and Author Margaret Edds.

She recounts the life and work of these two men and their colleagues, such as Thurgood Marshall, Charles Houston and others, who were the best Black legal minds in the country during their careers.

According to Edds, who now lives in Northern Virginia and was a former reporter with the Virginian Pilot, Hill and Robinson were part of a brotherhood of Black astute and resourceful legal professionals who toiled and helped to dismantle Jim Crow.

When Oliver was six-years-old, his mother married Joseph Cartwright Hill, who worked as a bellman at the Homestead resort. Thus, Oliver’s last name became Hill.

The family later moved to Roanoke, where the family ran a pool hall and other enterprises, before moving to Washington, D.C. There, Hill attended Dunbar High School and then Howard University Undergraduate and Law School.

He was a classmate and close friend of future Supreme Court Associate Justice Thurgood Marshall. Both studied under Charles Hamilton Houston, the chief architect in challenging Jim Crow laws through legal means. Marshall and Hill graduated first and second, respectively in their class in 1933.

Robinson was born in Richmond, too, and his father was a lawyer. He attended Virginia Union University as an undergrad and like Hill, was a product of Howard Law School, graduating first in his class and achieving the highest scholastic average in the history of the Law School.

Edds said initially Hill wanted to open a law practice in Roanoke, where he spent a good portion of his childhood, before moving it to Richmond where business was more lucrative.
He was also one of the founders of the Virginia NAACP, illustrating an interest in fighting against Jim Crow segregation during the early part of his career.

Hill moved his shop to the Jackson Ward section of Richmond, where most of the Black community lived and professionals practiced their craft. At the same time, Robinson was a faculty member at the Howard University.

World War II arrived and, according to Edds, Hill entered the U.S. Army and worked with an Engineering Unit in Britain.
Before he ventured off to war, he wanted to find someone to keep his operation going while he served. Robinson was the ideal candidate, but he was still teaching at Howard.

And there was another hitch, according to Edds. The brilliant and exacting Robinson had a neurotic fear of taking the state bar examination and failing. Until he passed it, he could not practice law.

Edds said a plan was devised to allow Robinson’s father to keep Hill’s shop operating until his brilliant son passed the examination, which he did.

Thus the “Dynamic Hill and Robinson Duo” was formed. Martin A. Martin of Danville, the first Black U.S. Department of Justice Trial Division lawyer, would add his name to Hill, Martin & Robinson at 623 N. Third Street in Richmond in 1942.

The firm also worked to equalize school facilities and obtain bus transportation for Black pupils.
By 1949 the NAACP’s offensive to end Jim Crow education was gaining steam. Marshall, according to Edds, dispatched Robinson to 75 locales around Virginia to record the deplorable conditions of the Black public schools compared to White ones.

Before the Brown Decision of 1954, Hill and Robinson and with the help of the NAACP’s Legal Defense Fund, settled on six of the cases related to the Virginia locales of Chesterfield, Gloucester, Surry, Prince Edward and Pulaski Counties and the city of Alexandria.

But their efforts in courts to get the reticent White school boards to improve the schools in Virginia fell flat.

Edds said Virginia’s Prince Edward County case was one of the five included among the NAACP Legal Defense Fund’s case for the Brown Vs. Topeka, Kansas suit.

The Virginia case centered on events in April 1951, when 16-year-old Barbara Rose Johns covertly organized a student general strike of Black students to protest the conditions in the Prince Edward County Schools system.

The Brown Decision was handed down in 1954, and it was a monumental triumph for the NAACP Legal Defense Fund and Hill, Robinson and others.

But the school divisions across the South dragged their feet using Massive Resistance orchestrated by White politicians and city officials.

Along with dragging their feet, Edds said Virginia launched an effort to destroy the law practices and the reputations of Hill, Robinson and other Black lawyers fighting the war to destroy Jim Crow.

“They went after them with tooth and nail,” said Edds. “The state tried to destroy the lawyers and the NAACP by forcing the organization to reveal its membership rolls.”

Also, according to Edds, the state filed a suit against the NAACP, claiming that its recruitment of Black people to use their names to file suits was illegal. But the NAACP won.

The Brown decision and other cases helped propel the modern Civil Rights Movement and were some of the high watermarks of the Hill-Robinson duo.

The Virginia NAACP’s efforts continued, and Hill returned to his Virginia practice and leadership of the state’s legal staff in 1965, after passage of the Civil Rights Act of 1964 and the Voting Rights Act of 1965. Those statutes, implementation of new U.S. Department of Health, Education and Welfare regulations (which provided additional funds for districts complying with the racial desegregation mandate), as well as Green v. School Board of New Kent County (1968) finally tipped the balance toward integrating Virginia’s public schools.

Robinson was named dean of the Howard University School of Law in 1960 to 1963. He also served as a member of the United States Commission on Civil Rights from 1961 to 1963. In 1964, he became the first African-American to be appointed the United States District Court for the District of Columbia.

In 1966, Robinson became the first African-American on the United States Court of Appeals for the District of Columbia Circuit.

In 1981, he became the first African-American to serve as chief judge of the District of Columbia Circuit Court. Robinson took senior status in 1989 and later retired. He died in 1998 at age 82.[/cs_text][/cs_element_column][/cs_element_row][/cs_element_section][/cs_content]