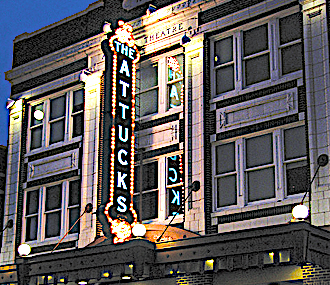 organization created to restore Norfolk’s Historic Attucks Theatre will be dissolved as of December 31, according to leaders of the non-profit’s Board of Directors.

LaVon Purnell-Wilson, the current board chair since 2016, told the GUIDE two weeks ago, that she and other CACC board members were in the final stages of the process of closing out the operation of the organization.

Purnell-Wilson said the Board of Directors has been discussing disbanding the CACC for the past three years, even while planning for the historic theater’s centennial celebrations which took place in 2019-2020.

The board voted unaminously to dissolve the CACC in September.

Since then, according to Purnell-Wilson, she and members of the board have been closing out tax issues with the Virginia State Corporation Commission (SCC) and filing documents with the state to officially close down the board and the CACC’s operations.

The organization is taking accounting documents and removing some property and other business materials from the building which is now owned and operated by the city of Norfolk, as one of the SevenVenues cultural network that includes the Chrysler Theater and the Wells Theater downtown.

She said CACC evolved to raise money to restore the Attucks theater on Church Street which was first opened in 1919.

Blacks were not allowed to patronize the White-owned theaters along Granby Street, during the Jim Crow era.

Church Street was the center of Black commerce, where Blacks ventured to shop and to be entertained.

There were other theaters in the business corridor, abandoned by Whites who once inhabited the area, but who left for Granby Street.

As in Tulsa, Oklahoma, nearby Portsmouth, Hampton, and elsewhere across the Jim Crow South, Norfolk’s Black community wanted to demonstrate their economic independence and pride. So they raised the funds to build, open and operate the Attucks.

During its initial heyday, the Attucks was an enviable cultural showcase of the South. Harlem’s famous Apollo Theater opened its doors 14 years later.

But the Attucks fell on hard times by the end of the 1950s and became dormant. It was used as a men’s clothing store until Father Joseph Green, the Rector of the Grace Episcopal Church, organized the CACC to restore it in 1986.

Green told the GUIDE recently that the city was devoting funds at that time to restore and continue the operations of the Historic Wells Theater and others to bolster the city’s image and cultural offerings.

“I did not see anything in our community which was getting the same attention and being restored,” recalled Green. “So I asked Mayor (Joe) Leafe and other council members to be fair. Why not devote funding to restore the Attucks.”

“African Americans had united together to raise money, design, build and run it,” he said. “So my colleagues agreed that the CACCC would raise one half of the money and the city would match it.”

Green was reared on a farm in Jenkinsville, South Carolina.

After the war, he enrolled in seminary. He later honed his skills as a Chaplain at St. Augustine College in Raleigh, as the modern Civil Rights Movement was gearing up.

He was recruited as Rector of Norfolk’s Grace Episcopal Church in 1963, and was appointed to the

Norfolk School Board before being elected to council in 1978.

Green said he recruited businessman Andrew Fine, who was a whiz a fundraising, and others to solicit private donations from a variety of sectors of the community.

As the CACC’s efforts were getting started Denise Christian, a Norfolk native, a graduate of Booker T. Washington High School, and Tennessee Temple University in Chattanooga with a major in English was working at a local bank.

In 1993, a 21-year-old Christian was also working on a Master’s Degrees in Urban Affairs attending classes at NSU and ODU.

Dr. Ronald Proctor noted her degree interest and writing skills and proposed she sign up for a summer Internship with the city of Norfolk.

Christian, who works for the SevenVenues operations now, overseeing the Attucks, recalled her reservations. She was working on a Master’s and had a job that provided her economic stability and benefit.

“He was insistent,” she said. “He told me I would be glad to step out of my comfort zone. I did it.”

She applied and got the gig.

“I was assigned to the Attucks (Theater) project,” Christian recalled. “I did research and compiled its history. I was also told to look at grant sources which could be used to restore it, develop an operational model and parking strategy.”

Christian said she collected the data and a list of funding sources and presented it to an assistant city manager.

“I had completed the Internship. But they did not want my work to go to waste,” she said. “So they asked me to continue the project. That is when I met Father Green, who was chair of CACC board and the

member and the new Directors and the capital campaign chair.”

Christian would eventually became the property manager for the Attucks restoration project which was owned by the Norfolk Redevelopment and Housing Authority (NRHA).

By 1996 the machinery for the restoration project was underway to raise the initial cost estimate of $4 million.

The CACC would raise $2 million and the city would match it to hire architectural, technical expertise, and other redevelopment costs.

Christian noted, as time moved on, the cost of the project doubled from $4 million to $8 million.

Christian used her English major skills and growing love for public administration to write the bulk of the grant application to secure public and private sources.

She wrote press releases about the CACC’s activities and used much of the historical research on the old theater to write brochures detailing its history and importance to the city’s history.

“The history of the theater is fascinating,” said Christian.

It was the first African American cultural center built by Blacks for Blacks in the nation, she said.

Black churches, businesses, and civic organizations joined forces to collect money to fund and build the theater. Twenty-five percent of the money came from the community in the form of stock that was sold.

“They sold stock at $10 a share,” Christian said. “People paid as much as $5 as a down payment and then the rest in installments.”

“We cannot forget her. This project could not have been as successful if it was not for Denise Christian,” said Father Green. “She was an operational staff of one. She has the skills to get so many jobs done.”

The partnership effort between the CACC and the city generated the needed funding to restore the building structurally and mechanically. Banquet and meeting spaces were added.

With great fanfare, the Attucks Theater was reopened for business in October 2004.

The Cripus Attucks Cultural Center, Inc., then shifted gears from restoring it physically to restoring its role as a center of culture and education.