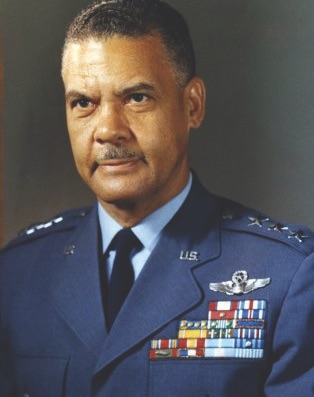 About a decade before President Harry Truman wrote Executive Order (9981) in 1948, which allowed more than a million soldiers of color to enroll in the military, Benjamin Oliver Davis Jr. had already survived four years of social isolation at West Point, lived in a dorm room for four years without a roommate, and was already making military history.
Davis was ahead of his time, in other words.

He was the son of Benjamin O. Davis Sr., the first African-American Army general, who died at age 93, on Nov. 26, 1970, at Great Lakes Naval Hospital in Chicago. The father is buried at Arlington National Cemetery. The son, who would become the first African-American general in the U.S. Air Force and command the Tuskegee Airmen, died on July 4, 2002 at age 89. Davis Jr. is also buried at Arlington National Cemetery, according to news reports.

Like the father, the son spent his life breaking color barriers and shattering racial myths as the commander of the pioneering Tuskegee Airmen. After Davis Jr. graduated in 1936 from West Point, (he ranked No. 35 out of a class of 278), and became the fourth African-American West Point grad, he was assigned in March 1942 to the first training class at Tuskegee Army Air Field. Davis Jr. was one of the first soldiers of color to complete the flying course. About four months later, in July, he was promoted to lieutenant colonel, and named commander of the 99th Pursuit Squadron. He earned his wings in 1942.

Davis Jr. spent his life soaring above mean-spirited challenges, or that is what President Bill Clinton said about 56 years later, in a ceremony that honored Davis Jr. and other Tuskegee Airmen at a White House ceremony in December 1998.

“For four years, fellow cadets refused to speak to him, hoping to drive him out,” Clinton said, during the ceremony that awarded Davis Jr. his fourth star and advanced him to full general, in 1998.

“What they didn’t realize,” Clinton added, is Davis Jr. believed he “was stubborn enough to put up with the treatment to reach the goal (he) had come to attain.” Clinton looked into the audience at the White House and described Davis Jr., as a “hero in war, a leader in peace, a pioneer for freedom, opportunity, and basic human dignity. He earned this honor a long time ago.”

Clinton added, “When the doors were shut on him, he knocked again and again until finally they opened, until his sheer excellence and determination made it impossible to keep them closed. Once the doors were open, he made sure they stayed open for others to follow. Some who followed are in this audience today.”

Davis Jr. continued to hold the standard high. After he finished West Point, he was assigned to the first training class at Tuskegee Army Air Field, and in March 1942 he was one of five African-American officers to complete the flying course. In July, he was promoted to lieutenant colonel and soon named commander of the 99th Pursuit Squadron.

Davis Jr. also worked with Truman after he wrote his ground-breaking Executive Order in July 1948. Specifically, Davis Jr. helped draft an Air Force blueprint on integration that went into effect the following year. Although Truman’s historic Executive Order was written about 12 years after Davis enrolled in the Naval Academy and was commissioned as a second lieutenant in 1936, which was the year, the Army had a grand total of two line officers of color – Benjamin O. Davis Sr. and Benjamin O. Davis Jr. The point is Davis Jr. tirelessly set the pace.

For example, he went to North Africa in the spring of 1943, worked as a U.S. pilot, and returned to the United States in September to command the 332nd Fighter Group, a largely African-American unit that was preparing to go overseas.

He never stopped soaring above clear racial challenges. For example, the top brass of the Army Air Forces recommended to the Army chief of staff, Gen. George Marshall, that the 99th be removed from tactical operations because it had performed poorly.

“The Negro type has not the proper reflexes to make a first-class fighter pilot,’’ one Army Air Forces officer maintained.

Soon questions about the African-American squadron sputtered and nosedived in late January 1944, when Tuskegee Airmen pilots downed 12 German fighter planes in two days over the Anzio beachhead in Italy.

Clearly, racial inequality was raw and hard to overlook when Davis Jr. was born on Dec. 18, 1912, in Washington, D. C. But he had a habit of rising above it.

Records show Davis Jr. flew 60 missions and received the Silver Star. He retired as deputy commander in chief of U.S. Strike Command in 1970. The Smithsonian Institute published his autobiography in 1991.