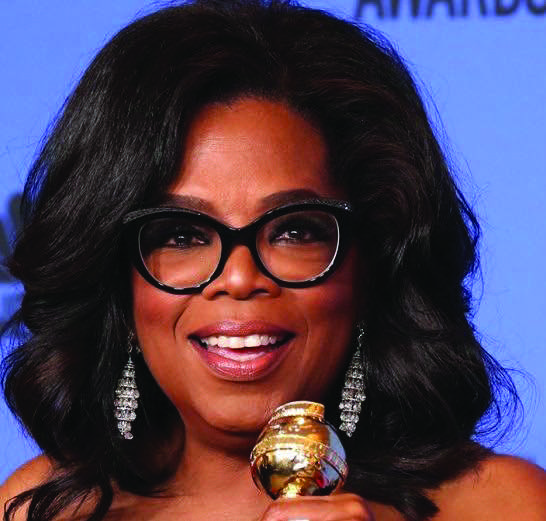 “A new day is on the horizon.”

That was the theme of the speech delivered by Oprah Winfrey Sunday night at the 2018 Golden Globe awards as she accepted the coveted Cecil B. DeMille Award. The speech not only has lit up the traditional and social media because of its passion; but also, it has ignited a storm of speculation about her foray into the 2020 presidential race.

Winfrey, whose speech highlighted her concern about the rampant sexual harassment against women in the entertainment industry and beyond, urged young girls and women to “speak truth to power” on the issue of their rights and position in society.

This year’s Golden Globe award ceremony was used by activists and celebrities attending the event to highlight their concerns about the issue.

As most of them strolled down the red carpet to the venue where the event was held, they wore Black gowns to signal their support for those who are victimized by sexual abuse.

The biggest names brought with them activists for gender and racial justice, including #MeToo founder Tarana Burke, who started the hashtag campaign which exposed the scale of sexual harassment against women worldwide.

“So I want tonight to express gratitude to all the women who have endured years of abuse and assault because they, like my mother, had children to feed and bills to pay and dreams to pursue,” she said.

Winfrey said she was “inspired” by “all the women who have felt strong enough and empowered enough to speak up and share their personal stories.”

She evoked wild applause when she told the story of of Recy Taylor, a Black woman whose 1944 rape by six men did not lead to any convictions. Taylor passed away last month at the age of 97.

“She lived – as we all have lived – in a culture broken by brutally powerful men,” Winfrey said. “For too long, women have not been heard or believed if they dared to speak their truth to the power of those men, but their time is up.”

Toward the end, she sent a message to “all the girls” watching her speech.

“I want all the girls watching here, now, to know that a new day is on the horizon! And when that new day finally dawns, it will be because of a lot of magnificent women, many of whom are right here in this room tonight, and some pretty phenomenal men, fighting hard to make sure that they become the leaders who take us to the time when nobody ever has to say “Me too” again.”

A CNN article on January 9 reported that “several Democratic strategists argued that Winfrey is one of the few people on Earth who could pull the focus of national media away from Trump in the heat of a presidential campaign – or “out-Trump Trump,” as one put it. Others cast Winfrey as an antidote of sorts to Trump’s brand of politics.”

CNN reported a tweet by Dan Pfeiffer, a longtime top aide to former President Barack Obama, saying, ”I don’t know if Oprah would be a good president, but she would definitely be a better president than Trump.”