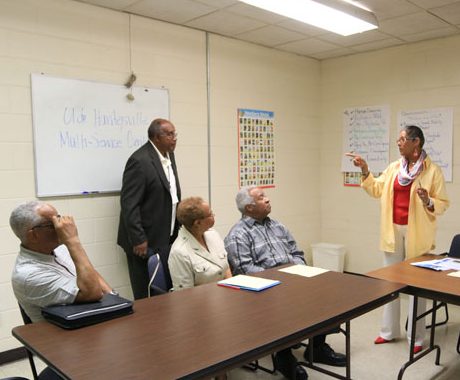 Norfolk’s Old Huntersville section is one of the oldest Black neighborhoods in the city. Multiple generations call it home now, or even after moving elsewhere, still claim it as the place where they grew up and secured the values which helped propel their lives and careers. Like many old inner city communities, there is a constant uneasy mixture of good, bad and, at times, very disturbing conditions that residents encounter each day in Huntersville.

On one street one may find stable families, living in well kept homes bordering streets uncluttered by trash, blight and threats to life and limb. Walk down another path one could witness poverty, isolation and a sense that chaos and threats to life that could “jump off” any second. You can literally follow a trail of trash and blight and find young Black men holding court on the street corners.

But it was not this intertwining of promise and uncertainty which has caused the local media recently to focus its attention on Huntersville. Rather, it’s been a string of violent episodes over petty disputes; a misunderstanding about a ride; officers killing a man barricaded in his home; or another man killed by police, as he sought to assist an already mortally wounded member of the family.

For many long-time residents church and civic leaders who call Huntersville, home, the recent media attention is like re-reading an old and disturbing short story or movie. The bad actors, characters and their behavior are the same, but the roles are being played by newer versions. In the eyes of outsiders, the excitement and tragedy are glimpses, via the media, of the explained and frightening world of the “hood,” just miles or blocks from the place they call home. But for those who see it each day, the resolution has been promised before and they brace themselves for the next deadly, sad, predictable and numbing replay.

Bea Garvin Thompson is one half of a legendary duo. She and Beatrice Jennings, her mother now deceased, worked with their neighbors to foster a renaissance in Huntersville over 25 years ago. Thompson said her mother was raised in the community, but later moved out. In 1980, Thompson said she followed her mother back to the area. At the same time, she and her mother bought condemned houses, restored them and moved into them. Thompson had a family, and like her mother, was a teacher.

“We had rich folks’ taste, but poor folks’ pockets,” Thompson said. “We did not buy those homes and improve them to spark renewal. It was where we could afford to live at the time.
“We saw a depreciation of the neighborhood. The homes and the quality of life went down and the crime went up,” said Thompson, now the Olde Huntersville Civic League President. “People who had lived here for years moved. Others were too afraid to come into (the area) unless they could not afford to live elsewhere.”

At the same time, despite resistance from the Black community, the once prosperous Church Street business corridor had eroded into a strip of blight and symbol of urban decay.
Starting in the early 60s, economic desegregation allowed Blacks to patronize businesses in downtown on Granby Street or elsewhere. They increasingly abandoned Church Street which supported Huntersville and other Black neighborhoods.

“We knew the city was going to revitalize the area west of us, including Church Street,” said Thompson. “And bit by bit the city began to tear down Church Street. We thought Huntersville would be next. So we got busy and created the Olde Huntersville Development Corporation.” Jennings and Thompson lobbied city leaders, and Norfolk Redevelopment and Housing Authority (NRHA) and other entities to invest in the community—millions of dollars needed to build homes, support programs to fight poverty, poor infrastructure and other developments.

Thompson said over 130 new homes were built, and families were attracted to the neighborhood. The Olde Huntersville Development Corporation was a model, she recalled, for micro-urban redevelopment. “We brought so many resources in to help reduce crime and raise the pride of the people in the community,” said Thompson. “We thought we had worked our way out of a job. We thought the good days would continue.”

But recent unseemly events have alerted Thompson and other Olde Huntersville Civic League and church leaders of the need to pull out their old urban renewal play book. At a recent civic league meeting, Thompson and about 75 residents of the area met in the small sanctuary of the Wesley Union AME Zion Church to unveil a strategy to halt the community’s spiritual and physical being from eroding – again.

Thompson said city, civic, and police officials and political leaders sat and watched as she presented the Olde Huntersville Civic League action plan to reconstitute the effort to address many of the reasons which have caused the recent spurt of violence. “The violence and other challenges we witness are not unique to Huntersville…it’s all over the region and nation,” said Thompson. “The crime was put at the forefront because of its frequency in such a short period of time. This is now causing us to look at other issues which caused it.”
Thompson outlined a five-point plan which will be the basis of city and Huntersville leadership’s efforts to stem some of the factors to halt the decline in civility and economic stability in the community.

The first is “combating family and personal barriers to upward mobility”; Second—building a spirit of community; that is, developing basic pride in the history and opportunities of Huntersville; Third—creating safe and walkable streets; Fourth—creating and adhering to community standards of civility, respect of personal expectations. This involves reducing noise, mowing yards and other protocol which breed a sense of community. And fifth, building capacity for sustainable leadership and community development skills and systems. This will assure continued vigilance and corrective efforts.

Thompson also talked about urging the city to enforce housing usage and stability codes to deter erosion and the misuse of the housing stock for illegal and other reasons. “I think we need to equip many people with skills to resolve conflict,” said Thompson. “Many people who are underemployed or not employed are striking out because of stress and burdens of life they feel they have no option to resolve.

“We have to go back to building people,” she said. “We have pockets of our community where you can follow the paper trail of trash to encounter young men who are loitering on the corner. We need to reach out to them— they are our neighbors—and help them develop a meaningful life.” Thompson said her civic league and other leaders will not become complacent with their plan.

“We have created a tinplate of action to pursue for the next 12 months,” said Thompson. “A year from now we will look back and see what has changed and what part of our plan needs tweaking. We will then seek out more supportive and wrap-around resources to achieve our goal. “There are people of all ages and background who live in Huntersville and want to proudly call it home and not one of the top crime stories on TV news everyday.”