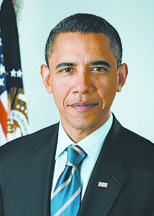 Former president Barack Obama will deliver the annual Nelson Mandela memorial lecture at a 4,000-capacity arena in Johannesburg in July.

Obama met with Mandela in 2005 and eulogized him at his death five years ago, saying “(Mandela) makes me want to be a better man.” The lecture marks 100 years since the birth of the anti-apartheid icon.

Under the title “Renewing the Mandela Legacy & Promoting Active Citizenship in a Changing World,” Obama’s speech will focus on working across ideological lines and resisting oppression and inequality.

Obama is likely to address growing intolerance in a world where extremist views are finding a mainstream platform in western countries including the United States, France and Germany.

Sello Hatang, head of the Nelson Mandela Foundation, said the foundation had been seeking someone with “an Africa heritage” to deliver an address that will “deal with issues of democracy” facing the world today.

“We thought who can (better) represent the legacy of Madiba than the person who we believe took the baton when he became president of his own country,” Hatang said.

Hatang told the AFP news service that Mandela was “elated” when Obama was elected in 2008 “because he saw it as a moment in American history”.

Benjamin J. Rhodes, a former speechwriter for Mr. Obama who still advises him, said the former leader views this as his most important speech since leaving the White House, one that will set the tone for his post-presidency. Mandela was a beacon to Mr. Obama, inspiring what he once said was his first “act of political activism” – a speech he gave as a student at Occidental College for the anti-apartheid movement.

“Where the current administration seems to have forgotten about Africa (or just insulting it), Obama is still looking to the continent as a key future player,” observed the online news site Quartz. He will also use his visit to South Africa to launch his new program, Obama Foundation Leaders: Africa.

The five-day program will begin after the lecture and include 200 young Africans, the Obama Foundation said.

Obama’s lecture will be at the Ellis Park Arena on July 17, a day before Mandela’s birthday.