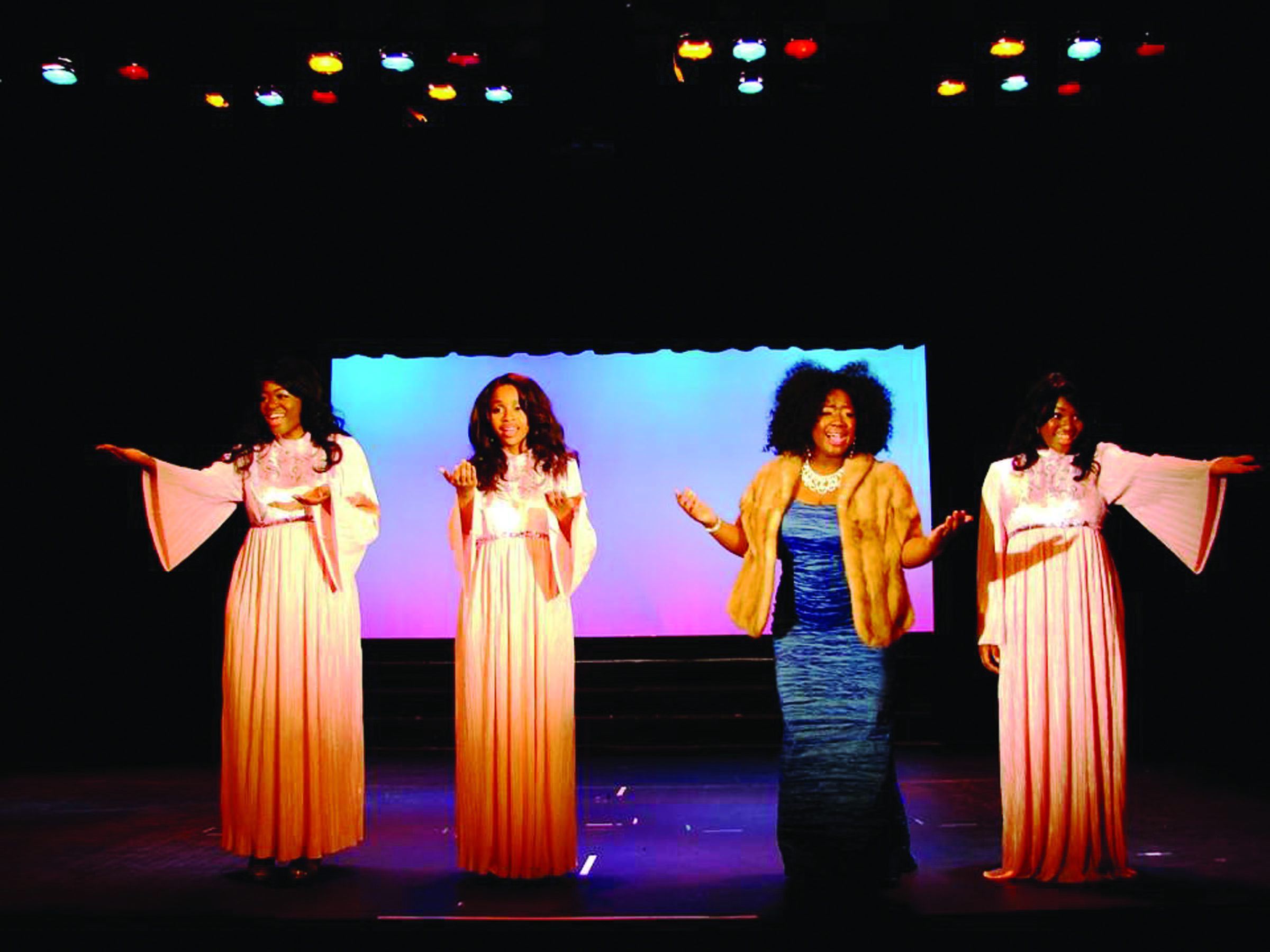 NORFOLK
In less than two years, since his August 2014 arrival to assume the helm of the Theatre Department at Norfolk State University, Anthony Stockard has established a tradition of phenomenal precedents. Within his first year, NSU’s production of Tarell McCraney’s “The Brothers Size” was featured in the 14th Biennial National Black Theater Festival. In the Festival’s 28 year history, Norfolk State University had never been invited.

Earlier this year, “The Brothers Size” was selected to be featured in the Kennedy Center’s American College Theatre Festival; also a first. The production was staged in February, in Charleston, SC, in Region IV of the prestigious national festival. Earlier this month, Stockard received an email with some extraordinary news. “We received notice from the Regional Director that we won the national awards,” he said.

NSU junior Christopher Lindsay, the principal actor in “The Brothers Size,” had earned the National Award for Distinguished Performance by an Actor in a Play. The overall production won the National Award for Distinguished Performance and Production Ensembles. These awards are no minor accomplishments. A recent NSU media release notes that they “are the highest honors available in the U.S. for collegiate productions,” and adds that, each year, “The Kennedy Center views more than 2,000 productions that feature the work of over 500,000 students.”

The initial invitation to participate in the festival came as quite a surprise. “I was actually unaware,” said Stockard. “It was just as shocking to me as everyone else.”
Over a couple of days recently, I had the occasion to chat with Stockard and a few of his dynamic students. I met with the genial professor in the theater’s green room. He was casually and comfortably dressed in a grey jacket and wearing what appears to be a trademark Kangol hat; this edition, of course, also in grey. He is easygoing, relaxed and quite comfortable in his being.

We were joined by students Indya Jackson, Derrick Moore, and Nicholas Bennett. The next evening I met Stockard in the theater, joined again by Jackson, as well as Meredith Johnson and Briyana Guadeloupe. Stockard’s students are doing great things. In addition to the remarkable success of “The Brothers Size,” which featured Lindsay, Moore, a junior, and graduating seniors Sergio Hargrove and Shaun Thompson, Johnson, who is a senior, appeared in this season’s Virginia Stage Company’s production of Jacqueline Lawton’s “The Hampton Years.”

Lindsay, Moore and Bennett will join their professor in the joint Virginia Stage Company, Virginia Symphony Orchestra, Virginia Arts Festival production of Shakespeare’s “The Tempest.” Adapted and directed by the VSC’s Pat Mullins, and conducted by the VSO’s JoAnn Falletta, the production is set for an 8 p.m. performance on April 16 and a 2 p.m. matinee on April 17, at Chrysler Hall.

But if you are as anxious as I am to see the full depth of theatrical talent coming to the NSU stage, you won’t have to wait long. From April 18 – 21, the NSU Theatre Company will be presenting a One-Act Play Festival. Over four days, the festival will feature 16 plays, staged by 14 student directors, and more than 100 actors from the NSU student body and the local community. It will at once be a dynamic and colorful showcase, as well as a celebratory introduction of what more the community can expect from Stockard’s stellar vision for a re-vamped NSU Theatre Department.

“I would like for us to expand into multiple areas of concentration within the new degree program,” Stockard said. “I would like for us to expand our reach into the community and into Hampton Roads and to become a regional destination for African-American storytelling.” Just outside of the theater’s green room windows, the construction of NSU’s new cultural arts center is in full bloom. Stockard gave it a nod and continued.

“I hope to collaborate with our new neighbors in our new building and toy with a little bit of film and TV production. They’re building a brand new television studio in that building.”
Initial plans for the new construction appear to have been developed in anticipation of the arrival of someone with considerable gravitas. Enter Stockard. “Everybody attached to the university and the theatre has been extremely supportive, the students, the faculty, the staff.” Stockard gestured outside of the windows a second time. “This is a daily reminder of what’s to come. I walk up every day and see a new piece, a new wall.” But the construction saw a change.

During his very first week on campus, Stockard surveyed the plans for the new facility and offered tactful, critical commentary that was, at once, a testament of his wisdom and the clarity of his vision, as well as his determination to achieve optimum effect taking over the reins of the Theatre Department. “And it’s crazy,” he continued. “When I first got here, I saw the design for the theater. I thought it was not as useful to the university.” His Dean, Dr. Belinda C. Anderson, College of Liberal Arts, herself demonstrating remarkable wisdom and trust, acknowledged that she didn’t know much about theatre, yet concurred. Beaming, Stockard added, “She let me the lead the redesign of the entire theatre space.”

Stockard not only has vision, but plans. “I have hopes of us acquiring the benchmark of being the first HBCU to offer a graduate program in Theatre,” he said. “The need and demand, educationally, for training in theatre is increasing, because people are looking for creative beings to be on their team.” Stockard then quoted an article by Katherine Bell, published in the Harvard Business Review, “The MFA Is the New MBA,” he said. Like his Dean, Stockard’s students plainly see that he is a passionate artist and arts manager, possessive of extraordinary vision. Their admiration, respect and affection for him are palpable. On his winning the prestigious Kennedy Center ACTF award, Lindsay said, “I was ecstatic and very grateful to my director, Mr. Anthony Stockard, for giving me the opportunity to perform. ‘The Brothers Size’ is an amazing piece. I am just glad that the Kennedy Center felt the same way.” Many of Stockard’s students, who are developing considerable chops as actors, will be making their directorial debuts with NSU’s “One-Act Play Festival.”

Sophomore Bennett, from Colorado Springs, CO, waxes philosophically about being onstage. “I just have a genuine love for performing,” he said. “I found my niche there. It feels like you can unleash everything that’s been held back. It’s an undying energy.” With such a philosophical outlook, it is not at all surprising that Bennett would choose a 15th Century morality play for his first attempt at directing. He’s selected “Everyman,” author unknown.

After some searching fellow sophomore Jackson, from Chesapeake, settled on Anna Stillaman and Mark Matthews’ Black comedy “Smitten” for her directorial debut. She noted that her experience as an actress informs her approach to directing, how she handles her cast. “You can appreciate where they are,” she said, “and you can appreciate the growth. It’s so exciting to watch, especially in my particular cast. I have people who haven’t touched the stage that often. So to be able to see them come alive and do the work, to put that drive in, it’s incredible. It’s just great!”

Moore, a native of St. Louis, MO will be making his first foray into directing tackling Neil LaBute’s dark drama “In the Forest Dark and Deep.” It has proved a most engaging challenge. “We get to feel a lot of the risks and the rewards as Mr. Stockard,” he said. “We get to pull out our hair as well.” The room erupts in laughter. In the next pensive moment, Moore added, “It’s really fun to have a vision and to see it play out in front of you.”

It took Johnson, from Baltimore, some detective work to find the rights and permission to stage her production of Ted Shine’s “Herbert III.” But it proved well worth it. “What I enjoy about directing,” she said, “is the opportunity to have stories come to life, stories that others may not be familiar with. I enjoy seeing my vision come to life and sharing what I envisioned with others.”

Graduating senior Guadeloupe, who hails from Alpharetta, GA, has chosen to direct Cat Coxon’s compelling drama “Anna, Alone,” about a woman diagnosed with Dissociative Identity Disorder, multiple personalities. Guadeloupe said, “I really enjoy directing because I am able to see all of my ideas on stage and am able to give back to the theatre, in another form than just acting. It also challenges me to use my creativity and has taught me patience with my actors and the process as a whole.”

A native of Toledo, Ohio, Stockard earned a B.A. in Theatre Arts from Alabama State University and an MFA in Theatre Arts from Brandeis. He said that he gets excited about, “things that I am not sure that I can accomplish, in places that I know it is inevitable that work has to be done.” He is bringing a magnificent force to local theatre and his patrons are about to get an education.