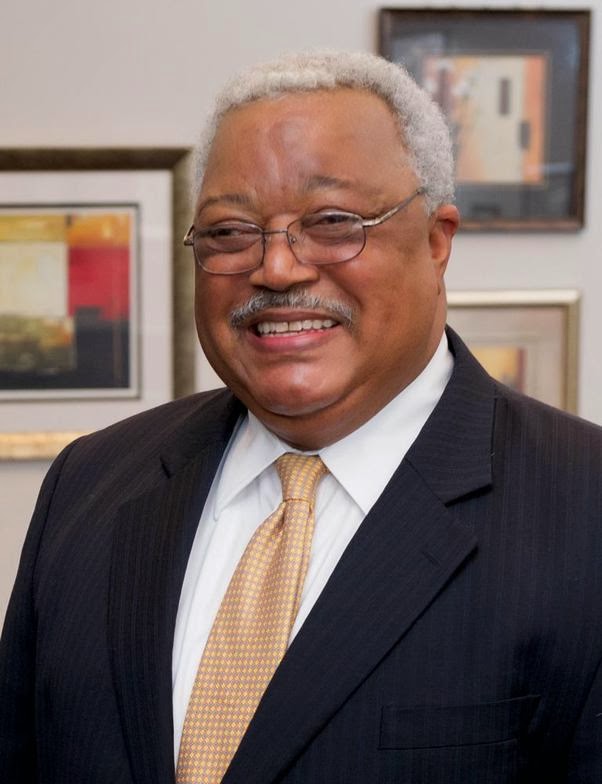 Forty-nine years after he graduated from his alma mater, Norfolk State University’s vice rector, Dr. Melvin Thomas Stith, was named the HBCU’s Interim President, effective Jan. 1.
Stith has been on the NSU Board of Visitors (BOV) since 2013 and Vice Rector since 2016 and will serve until the school finds a replacement for the current President Eddie N. Moore, Jr.

Moore abruptly announced his retirement in late September after serving a year as the school’s fifth President.

After graduating from NSU, Stith served in the U.S. Army and rose to the rank of Captain in Military Intelligence. He served during the height of the Vietnam Conflict, from 1968 to 1972, an entry on his resume he shares with Moore, who served in South Vietnam from 1968 to 1969.

In an interview with the GUIDE two days after he was named interim, the native of Jarratt, Virginia, who lived on the family farm, said he enrolled at the university when it was called “Little State” or the Norfolk Unit of Virginia State College in 1964.

“When I came here in 1964, it was small and friendly … there were only about four or five buildings,” said Stith, who lives with his wife, Patricia, in Jamesville, New York.
“Dr. (Lyman Beecher) Brooks, was the (first) president then. He told us when we left Norfolk State we would be prepared to go anywhere and compete with anyone. That was true because we have alumni all over the world and in many professions.”

Stith said he considers it an honor to be interim President of NSU, but does not want the job permanently.

“I have retired from academic and professional life,” said Stith, now 71. “This will give NSU a chance to have an open search nationally and start from a clean slate.”

NSU is searching for its fifth President in 20 years. Stith said he is not on the search committee and hopes that the next president will be able to stay at least seven years.

“But there are no guarantees,” he said. “Many school presidents come into very demanding and volatile situations. They have to raise money, enrollment, fundraise for athletics and scholarships. It is a 24-7 job and you can get burned out,”

Stith said while he was working in various capacities at Syracuse University, he noted the level of fund raising there. He said that President Moore during his tenure has “built a strong philanthropic group who are contributing to the school.” And he said he will be helping to expand that during the brief period he is leader.

He said that the next president must expand on fundraising and “put students first, build a strong faculty, believe in shared governance and create a good positive environment on campus.”

Stith said NSU, like other colleges, is facing a number of challenges that strong leadership at the top could help overcome.

Stith said colleges and universities are seeing less federal and state aid and must build strong fundraising networks that are willing to donate for the development of facilities, scholarships and other programs.

When he was a freshman in 1964, Stith said African Americans had few options to attend college in Virginia other that Virginia State, Virginia Union, St. Paul’s College or his alma mater.

“When I arrived at Norfolk State, there were no dorms so I had to stay with my uncle in Portsmouth,” Stith said. “And he did not charge me a dime. So one reason why I enrolled at Norfolk State was because it was affordable, I got a great education and met my wife (Patricia) and started my professional life.”

A college education for most students is a very expensive investment today, he said.

He said another challenge facing colleges and their leaders, especially HBCUs, are attracting students to campuses, at a time when they have other options, which may be less expensive and with more attractive facilities.

Over the past two decades, despite the turnover of the occupants who work in the fifth floor presidential suites of Wilson Hall, NSU’s admin building, the school has managed to upgrade its facilities, programs and brand to attract and retain a diverse group of students.

“They have other public, private and for-profit schools,” he said. “And you must have all of the facilities … bells and whistles for them and they are all expensive.”
Along with being a good fundraiser and administrator, Stith said that the next NSU president should also be “ a good listener and communicator.”

“He must realize the bucks stop with them,” he continued. “He must make a decision in the best interest of the school. And he must be able to communicate the reason why he made a decision and be open and honest about it.”

Stith received his Bachelor of Science in Sociology from Norfolk State and his MBA and Ph.D. in marketing from the Martin J. Whitman School of Management at Syracuse University in 1973 and 1978.

In 2005, Stith became the 16th dean of the Syracuse University Whitman School of Management 2013. Until his retirement in December 2014, Stith was a professor of marketing in the Whitman School of Management. From 1991 to 2004, he was dean and the Jim Moran Professor of Business Administration in the College of Business at Florida State University and previously was associate professor and chair of the marketing department at FSU. He is also dean emeritus at Florida State University.