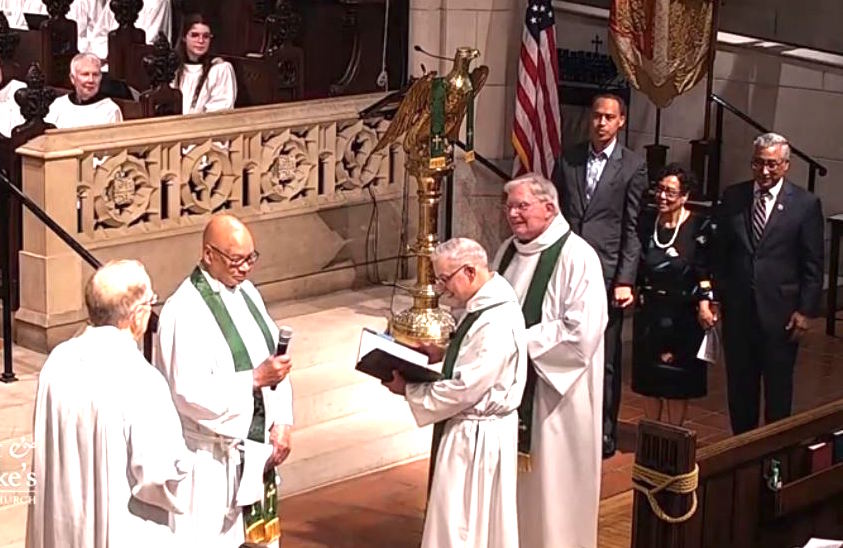 On Sunday, June 27, 2021 the Bishop of the Diocese of Southern Virginia, the Right Reverend Susan B. Haynes installed the Honorable Reverend Dr. Joseph N. Green, Jr. as Canon Theologian of Christ and Saint Luke’s Episcopal Church in Norfolk.

As Canon Theologian, Fr. Green will serve as mentor, teacher and a “godly reflection coach” for all of us in the diocese. Reflecting on how we understand God to be at work around us and how our work can join in God’s work, is what theology is all about.

Fr. Green earned a Bachelor of Arts Degree from St. Augustine’s College in Raleigh, North Carolina, before earning his Master of Divinity Degree at Philadelphia Divinity School in preparation for his ordination to Holy Orders.

Fr. Green said this about his college days. “There were 10 of us at Saint Augustine’s that were going into the priesthood. We were at that juncture where we wanted to show the Church that we could go to a white seminary and we could excel and do as well as the white students. All of us decided to go to a white seminary. We wanted to break down the barriers that we had broken down in other places. The Church cannot function as a separate and unequal institution and the School certainly cannot.”

Fr. Green earned a Master of Sacred Theology Degree from the University of the South in 1965. In doing so, he made history as one of the first of two African American students to earn a degree from the University of the South. Fr. Green’s life-long accomplishments stand as one of the hallmarks of the School of Theology’s history. Today, his portrait hangs in the lobby of the Administration Building at The School of Theology, a fitting tribute to one of its most distinguished graduates.

After his ordination, he served congregations in the Diocese of Upper South Carolina and as chaplain at St. Augustine’s College. In 1963, he was called to Grace Episcopal Church in Norfolk, Virginia, where he served as rector for 30 years.

His community service is legendary. Asked about his call to ministry, Green had this to say, “I learned what people need. I also learned what I needed. I learned that a healing ministry works both ways and boy did I see it work miracles!”

He served on the Norfolk School Board before spending 20 years on the Norfolk City Council, continuing to stress the causes of civil rights for African Americans and fair play for all as he worked for the betterment of Norfolk. His efforts to promote affordable and accessible housing in Norfolk led to new housing in many sections of the city. Highlights of his tenure included the promotion of mass transit, inclusion of a public housing tenant on the Housing Commission, and efforts to establish a downtown campus of Tidewater Community College. Reflecting his achievements, the administration building of Tidewater Community College is named for Green, and the city council named a street after him.

At 95, Father Green is still speaking truth to power with compassion and humility. He is the embodiment of our baptismal covenant to “strive for justice and peace among all people and respect the dignity of every human being.”

This article was submitted by Helen Sharpe-Williams, President of the James Solomon Russell Chapter of the Union of Black Episcopalians.