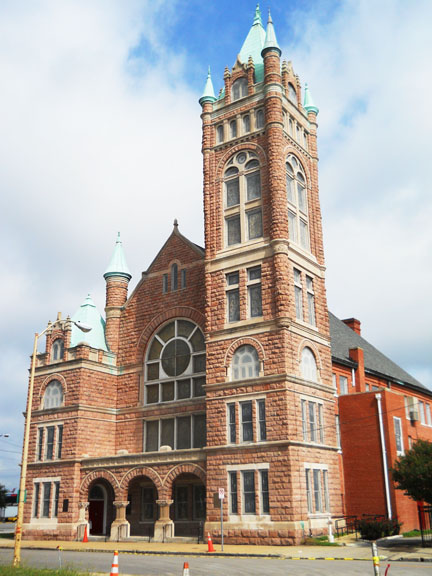 This year, the clergy and congregation of Norfolk’s Historic First Baptist Church, Bute Street will celebrate its 217th anniversary throughout July as it does yearly.

At the same time, it will observe the 111th anniversary of the birth of the building where members attend and carry about the weekly worship and daily ministries.

But this year, the church will celebrate another segment of its history and the city of Norfolk’s.

According to Lula Sears Rogers, the Chair of the Church’s History and Archives Ministry, on July 3, a program will be held recognizing the church’s connection to the Norfolk 17, the first African-American students to desegregate Norfolk’s all-White schools.

After several years of legal wrangling with the school board and White political power structure, the federal courts ordered the division to admit the 17 students to six of the schools which were all-White in the fall of 1958.

But the state ruled any all-White schools that were targeted for federal court-ordered desegregation to comply with the U.S. Supreme Court’s Brown Decision outlawing segregated schools had to close.

So Norfolk closed all of its Whites-only schools. The city’s all-Black schools remained open, including Booker T. Washington High School.

However, the federal court, based on the legal work by the NAACP and other elements of the Black community, ordered the city to reopen the schools finally in February 1959.

Originally, there were many more Black students who had been screened to attend the all-White schools after a series of academic and other tests to determine their fitness.

But the number was whittled down to 17. When the White schools targeted for desegregation were closed in the fall of 1958, First Baptist Church created a prep school in its basement for those 17 students.

Black educators volunteered to provide core educational courses the students needed to keep their skills up to par, until the federal courts forced the city to reopen the schools.

Today only 11 of the original Norfolk 17 are alive. On July 2, according to Rogers, during First Baptist’s 8 a.m. and 11 a.m. worship services, 17 students from schools all over the Hampton Roads area will do a symbolic march into the sanctuary.

“Each of the children attend a school from each of the cities,” said Rogers. “Due to the sacrifices of the Norfolk 17, these children are able to attend these schools, some of which existed at the time of the desegregation battle 59 years ago.”

Rogers said that once the 17 children file into the sanctuary, Pat Turner, who enrolled at Norview Junior High School in February 1959 and is one of the remaining 11 members of the Norfolk 17, will enter last.

Her walk down the aisle of the sanctuary will cast the symbolic and historic spell on the event, Rogers said.

In 2008, after First Baptist observed the 50th anniversary of the Norfolk 17’s contribution to history, the city of Norfolk organized a broader series of events to do so.

Louis Cousins was enrolled at Maury High School in 1959. One of the most iconic images captured was Cousins sitting among a number of rows – alone – separate from the White student body during an assembly in the school’s auditorium.

Cousins and his Norfolk 17 colleagues have shared their recollections of the isolation, verbal abuse, and other slights directed toward them by resentful White students and teachers while attending schools and making history.

Cousins now lives in San Antonio, Texas. After graduating from Maury, he attended Norfolk State University, and then enlisted into the Air Force, in the medical field.

He served during the Vietnam Conflict, and said he saw some of the most brutal fighting along the South Vietnam-Cambodian border in December of 1968.

“I was with the Army’s Second Corps as a medic. They (Viet Cong) would fire artillery to keep us down and inactive so they could move past our positions to make their way toward Saigon – their main objective,” said Cousins. “I saw a lot death and destruction.”

Cousins was in Norfolk recently because of the death of his brother. He stayed for several weeks, and will leave a day before the July 2 event at First Baptist.

For 34 years, Dr. Robert G. Murray has been the Senior Pastor at First Baptist, Bute Street.

He said his church’s work to help the Norfolk 17 fifty-nine years ago, and the July 2 event represent his church’s “Divine Assignment.”

“But the struggle is not over,” said Dr. Murray. “We talk about the Norfolk 17 … our past in 1958 and 1959. But the realities which created that period are still present … still relevant.”

Murray noted the questions that alumni and the greater Black community have about the erosion of the image and physical structure of Booker T. Washington High School.

“It’s the same thing we see today,” said Murray, “It raises the question of what we did then … and now and the factors related to Booker T, the lasting legacy of this church and the Norfolk 17, who were pioneers who just wanted an education.”

He continued, “Look at recent movies about our history and education. ‘Hidden Figures’ about the Black women educated at Black colleges to work at NASA or even ‘Birth of Nation’ (which depicted a slave rebellion) and Nat Turner. Education is still a major thrust in our lives today.”

Other events are scheduled during July to observe the church’s anniversary during the 8 a.m. and 11 a.m. services.

On July 9, the church will recognize past and current leaders of the church under the theme “A Faith Journey” with Dr. Murray delivering the keynote sermon on the issue.
On that same day at 4 p.m,, Dr. Keith I. Jones, Senior Pastor, accompanied by the officers and members of Shiloh Baptist Church, will deliver a visiting sermon.

On July 16, in remembrance of members who passed from July 2016 to June 2017, Rev. Ozaze R.G. Murray will deliver a keynote sermon.

Also there will be a 20th year reunion of the Booker T. Washington High School Class of 1997.

On July 23, there will be a combined service at 10 a.m. with the emphasis on family and friends. They will be an installation of all church officers, display of the colors and a sermon delivered by Dr. Melvin Blackwell, Pastor of the Little Zion Baptist Church of Smithfield Virginia.

On the same day, all of the authors who are members of the church will have their works on display at the church.