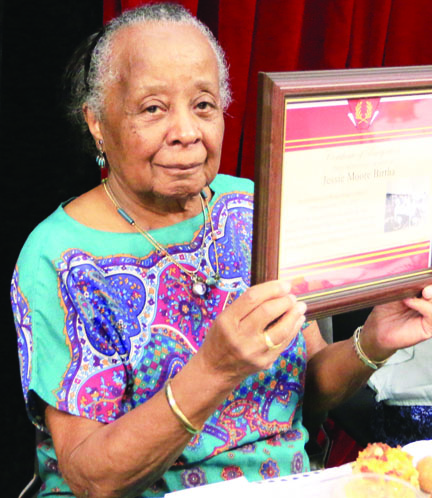 On July 23, the 95th anniversary of Norfolk’s Blyden Branch Library was held to celebrate it as the first library in Virginia municipally funded to serve African-Americans in this state. Not only was this anniversary a celebration of the library’s near century of service, but it also paid homage to the Black community’s pursuit of educational opportunities for itself during the time of Jim Crow and segregation.

A large crowd – which included public officials, current patrons and individuals who used the facility as far back as the 1920s as children – attended the program, in the small facility’s community room. The event was hosted by Blyden’s current branch manager, Dudley Colbert, who has been at the helm since 1990. “When I started the job 26 years ago, I did not realize that I would be here that long,” said Colbert, a Norfolk native. “I look around and see former staff and patrons whom I have known during that time, and I thank you all for supporting this library and sharing this moment in its history.”

Guest speaker Delegate Lionell Spruill – who just won the Democratic primary for the Fifth Senate District, which covers parts of Chesapeake and Norfolk – said Blyden symbolizes the Black community’s quest for educational equality over the generations. Spruill said that, as a child in South Norfolk County, Blacks had no library to use and “Blacks in Norfolk were blessed for a facility like Blyden.”

“This is a symbol of what we had to go through 95 years ago,” said Spruill, “but the torch was passed from one generation to another and we should teach our young people about who kept it going. This facility is now for everybody to share to read and learn and we should be grateful.” Norfolk Public School Board member Yvonne Wagner, a graduate of Booker T. Washington High School in 1969, noted that the Blyden Library began in a room of Booker T. Washington. She said her grandmother lived in a small house on the corner of Princess Anne Road and Merrimac Avenue, down the street from the library’s current site.

“I am part of its history because this library had its beginning at my high school,” said Wagner. “My friends and I would walk to this library, and we would do a little socializing and reading. I am excited by the history of this library. It is a beautiful tapestry of an example of what can be achieved when we worked together for equality.” For Jessie Moore Birtha, the anniversary celebration was not only an effort to pay tribute to the history of the Blyden Branch Library and how it was formed, but also a homecoming. Birtha, who now lives in Philadelphia, attended the event accompanied by her two daughters. She was born in the Huntersville section of Norfolk and, at age 96, is one year older than the historic library.

Birtha recalled that her father owned a cleaners and tailoring shop directly across from where Blyden sits today – 879 E. Princess Anne Road – with her and her siblings often patronizing the small facility. Birtha, who said her family moved from Norfolk in the late 1940s, marveled at all the infrastructural and social changes which have taken place in her home town. “This is a surprise birthday for me,” she said. “Norfolk has changed so much. A lot of things are gone, including the house I lived in as child. Also, when we were coming into Norfolk, I did not realize we had to come under water because of the tunnels.”

Birtha said many of the Black businesses are gone, but she was amazed to see all of the broad and busy streets. During her childhood, Chapel Street – which runs north and south today – “was the main street in this area,” and that Booker T. Washington High Schools, which was then called and looked like a ‘factory’ “has grown up so much.” Alvetta Green, a long time Norfolk Educator, said that she recalls when the Blyden Library was located at Church Street and Johnson Avenue. One of Green’s uncles helped her and her siblings acquire their first library cards at that site when she was 7 years old in the 1940s.

Like Birtha, Green recalled her encounters with Mrs. Jessie E. Moone, who was Blyden’s first librarian and served for 29 years. “I remember reading books like “Rebecca of Sunnybrook Farm,” recalled Green. “These books did not have any Black characters, but they allowed your imagination to soar.” The history of the Blyden Library is a long and storied one. Prior to 1921, despite a statewide Black population of over 700,000, no city provided library services for Blacks. But various churches, the local YMCAs and fraternal groups did to a small degree.

At one point in the early 1920s a group led by C. C. Dogan, the Secretary of the Hunton YMCA and other civic leaders, set in motion a plan to secure library services for Blacks via the Norfolk Public Library Association. In January 1920 the Blyden Library Association was formed by these leaders. The group requested that a library be opened in the first Booker T. Washington High School (formerly Mission College) in a 14 by 27 feet room on the same land where the historic library sits today on Princess Anne Road.

Mrs. Jessie E. Moone, a graduate of Claflin University, was hired as the first librarian at the facility. The Black library branch was named after Edward W. Blyden, a Presbyterian Minister, who was a Secretary of State of Liberia at one point. According to the July 23, 1921 edition of the Norfolk Journal and Guide, the branch had its “opening exercises” in the auditorium of the Booker T. Washington High Schools on July 18. Within two years, however, Black leaders were demanding larger quarters in a letter to Mary D. Pretlow, the Norfolk Public Library Director at the time. For 14 years, the Blyden Association petitioned to no avail.

In a November 7, 1931 edition of the Guide, a reporter noted that over 40 people were using a room which would normally accommodate 20 to 30 people. Guide Publisher P.B. Young, Sr., noting the overcrowding, went before city council to demand better facilities in 1933. In November 1937, Blyden’s second location was opened at 1346 Church Street in a two story house.
By October 1939, Black leaders complained of outdated books and other shortcomings in the facility at a time when patronage was increasing.

In 1942 the Norfolk Library Board turned all library operations over to the city. In 1947 the city opened its main Freemason Street Library to all citizens, including Blacks. But Blacks still used Blyden. In 1953 the Norfolk Mission College Alumni Association petitioned the city to build a new library and park for Blacks at the site of the original Booker T. Washington High School/Dunbar Elementary School. The council approved $60,000 in city funds for the project, and the current building opened in 1957.

During the 1960s and the Model Cities era, the neighborhood surrounding the facility lost much of its population and patronage decreased. Today, according to Colbert, Blyden has regained its footing with the branch experiencing a rebirth which started in the 1990s. “It is still the community’s library,” Colbert said during a recent interview with the Guide. “We not only provide traditional books, but e-books, videos, a computer lab, a meeting place and other services for people in the area. Multiple generations of people still call this their home library. People of all of incomes and backgrounds come and use our facility. It is a convenient, safe and friendly place.”