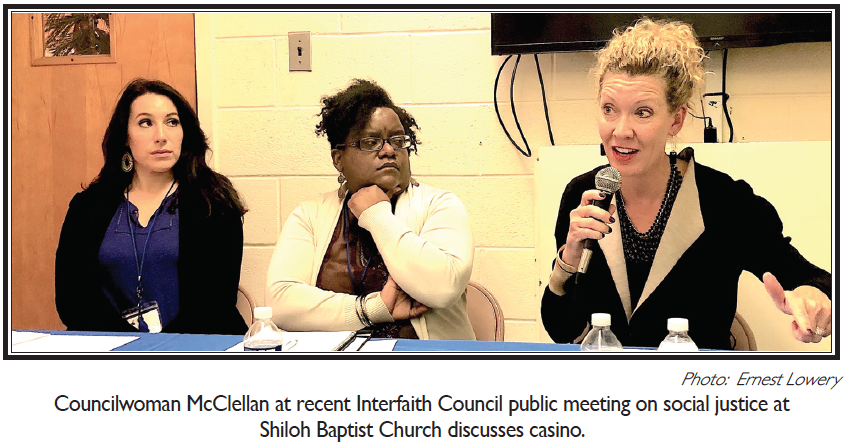 After reviewing a report indicating the economic boon will not be as strong as initially cited, Norfolk is revising a deal that would bring a casino to the city.

The new plan was unveiled by Norfolks City Manager Chip Filer during the first public hearing to allow residents to voice their views on the idea December 16 at Granby High School.

The revisions were based on an analysis of the city conducted to determine the economic impact on the city.

InSeptember the council approved a deal with the Pamunkey Indian Tribe to build a casino on 13 acres of prime city-owned waterfront land near Harbor Park.

The one council member who opposed the initial deal in September when City Council agreed to move forward was Councilwoman Andria McClellan, who said that it was not effectively vetted and was being rushed.

In an op-ed piece that appeared in the December 12-18 issue of the New Journal and Guide, McClellan said it was not her intention to vote against a casino. I stated in my vote we simply had too many unanswered questions to make an informed decision on a forever project, she wrote.

McClellans op-ed was based on the statement she had delivered to council in explaining her objection.

I knew then that there was a statewide study being conducted on gaming to be released in November. I also knew that the General Assembly would likely vote on legislation to make casino gaming legal (in specific localities) in the 2020 session. Recognizing that these additional recommendations and legal actions were coming in a few months, I suggested that we table the vote until after we had all the cards on the table, so to speak.

During the Dec. 16 pubic hearing at Granby, information delivered from the analysis report by the City Manager confirmed information McClellan gave in her op-ed.

Initially, the city said that thecasino would be built by the tribefor $750 million.

The recently completed analysis said it would be $375 million.

Instead of the 3,000 jobs,only half that number would be generated.

Also the revenue the citywould garner annually was dropped to roughly $6.4 million.

Further, the number of people who would patronize the facility was revised downward to 1.6 million. Most of them would come from outside the area.

The city had not conducted an economic impact study of its own. Instead, initially, it relied on the tribes figures and a recent state survey which said locales that had casinos would receive some $299 million in revenue.

Under the revised plan, after buying the land, the Pamunkey, which is a tribal nation, would not place it in a trust that would shieldthe casinos profits from being taxed by the city or the state.

Instead of the city paying for the infrastructure improvements, the new plan provides that the tribe will be required to do so now.

When the plan was approved, some residents agreed with Councilwoman McClellan that the process was being rushed.

The Dec. 16 hearing was one of two slated by the city, due in part to civic pressurewhich generated two petition drives.

The first one failed. But a second called for public hearings and a revote by the council on the measure.

Tribal leaders, according to media reports, say they are reworking their economic forecasts and are open to the citys revisions of the deal.

When the Virginia General Assembly convenes January with Democrats in control, approval of casino gambling in the state will be under consideration.

The city and the tribe will have to adjust their plans further if lawmakers approve legislation approving it.