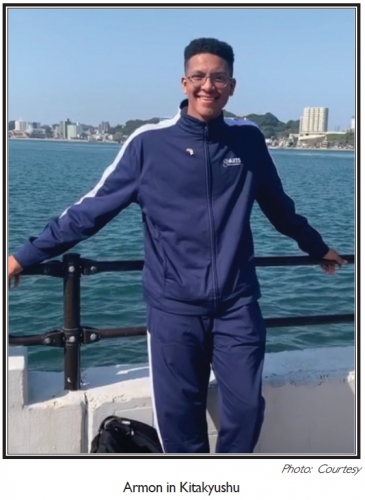 Two years ago Armon Davis at age 16,  auditioned and was accepted into the Governor’s School for the Arts in Norfolk.  His passion is singing, acting, and dance; he also loves to travel. He is currently involved in the musical/theater department

Today, Armon is 18-years-old and a resident of Suffolk, VA. A newly formed team from his school was asked to join a mission group for travel abroad to Japan and to put together a show celebrating Norfolk Sister City’s 60th Anniversary of music. They were slated to perform in cities like Hiroshima, Kitakyushu, Miyazaki, Osaka and Japan. The mission of the chosen ones was to act as ambassadors, promote and foster peace and harmony from a grassroots level.

The group of approximately 30 were excited to be in Japan where they were divided and lodged in the homes of their indigenous hosts. Armon was particularly a sight to see. Towering at 6’4” and still growing, he was an additional talking point among the Japanese as he navigated around.  Lest we forget, the Japanese were not used to seeing a group of young African-Americans and white people wandering around their city.

Also participating in the travel, representing the City of Norfolk, was City Councilwoman Mamie B. Johnson, 3rd Ward.

During their stay they engaged in all types of music: jazz, the Beatles, Motown sound, Whitney Huston and much more. Usually the performance lasted about an hour, and there were times they would go out and dance with the audience. With an obvious language barrier between the two countries, everyone allowed the music, acting and dances to guide their souls. In most of the areas where the team performed, the young Japanese audience sat on the floor as they watched intensely to all the performances.

Armon constantly raved about how clean Japan was. He said he rarely set sight on a trash can and could notice the cleanness in the air. He also witnessed how nice the people were toward the students, Armon also pointed out it seemed like it was their mission to treat them well.

One of Armon’s fears was food. As it turned out everything proved well with some minor adjustments and advice. As you can imagine there was plenty of healthy food, rice and tea were served with every meal, and a lot of seaweed was available. He experienced no issues.

One more thing of interest to him was that the Japanese are not wasteful eaters … amazing. And the yen currency they use is close to the American dollar (100 yen equal one American dollar), so the food price was balanced.

Armon recalled one of his amazing moments was the train ride during rush hour. The view of the mountain side, the quiet speed of the train was remarkable. Most importantly was the respect everyone had for each other – although the train was packed (no talking … imagine that). You could hear a pin drop.

The team was in Japan short of two weeks and at the end of their tour, eight of the 30 students were asked to return to be a part of the upcoming competition.

Music and dance is one way the two different countries came together; showcasing their power of the arts in the eyes of the Japanese.  Armon was one of the eight selected to return in April 2020 for a strong week of competition and fun.  However in April during  this all-expense paid trip, the group’s focus will be on singing acappella.